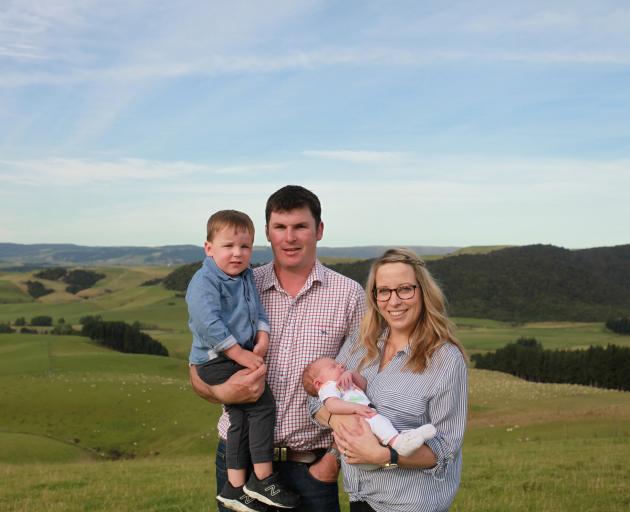 Mr Rabbidge (32), a Glenham sheep, beef and dairy farmer, is intent on not only growing his own farming business, but also defending what he views as a "bad rap" that farming receives from some.

He recently became a trustee and member of the Three Rivers Catchment Group, which was established to engage with all sectors of the community and educate around the management of fresh water.

The group comprised about 12 trustees, who were all farmers and who wanted to engage with the community around water quality issues. The catalyst for its formation was Environment Southland’s proposed Water and Land Plan.

Mr Rabbidge encouraged people to "do the right thing" and showcase best management practice. He wanted to "get some good noise" out there with all the good stuff that was happening, he said.

Mr Rabbidge was passionate about his agricultural responsibilities, not least running the family farm. Receiving the Zanda McDonald Award last year was an opportunity to talk through any challenges.

"I now have a strong support network that will help me unleash my potential, as well as that of my business, realise my ambition of encouraging more young people into agriculture, and help me to promote a positive perception of agriculture across urban areas," he said.

The search is on for young agri-leaders from Australia and New Zealand to apply for the 2018 Zanda McDonald Award which has a total prize package valued at $50,000.

Now in its fourth year, the award is run by the Platinum Primary Producers Group (PPP), a network of more than 130 agribusiness men and women in Australasia.

It provided the winner direct access to the knowledge that existed within the group’s members. The winner also received an overseas mentoring trip, a place on Rabobank’s farm managers or executive programme, and a $1000 cash prize.

Applications for next year’s award were now open to individuals aged 35 or younger, who were working in the agri-business sector and demonstrated natural leadership ability. Entries close on September 1.

The 2017 winner was North Otago dairy farmer Morgan Easton who will soon embark on the Australian leg of his mentoring tour.

Mr Easton will visit PPP members, including the McDonald beef farming operation in north Queensland, which is run by the late Zanda McDonald’s parents and wife Julie, and encompasses about 180,000 head of cattle.

Mr Rabbidge, who will sit on the judging panel this year, said anyone interested just needed to "go for it".

Asked the benefits of the award, he said it had been "huge". He had made lifelong contacts throughout the industry, both in New Zealand and Australia.

It had opened doors to many well respected producers to "pick their brains" and knowledge, some of which he could then implement in his  own  operation.

Mr Rabbidge took the opportunity to study farm succession, business growth and business structure.He and his wife, Sarah, who have two young children, Ted (3) and Ida (7 months), recently purchased the family farm, a process that was assisted with the advice and experiences of PPP members.

Mr Rabbidge has overseen the conversion to dairy and the day-to-day management of 72ha on the farm, run in conjunction with a 406ha sheep and beef unit.

Saying that he was "always optimistic", he said the dairy industry was looking "really good" but he would like to see some change in the red meat sector now, while prices were good and everyone was in a positive frame of mind.

Mr Rabbidge, who represented Otago-Southland in the Young Farmer of the Year grand final in 2013 and 2014, finishing fifth and third respectively, is now chairman of the national contest.

He was also a keen rugby player, playing for the Wyndham division 1 team, and while "the body’s starting to pack up but the mind’s still there", he had nearly notched up 100 games so thought he "better tick that off".

How did he fitted everything in? time management: "You just do what you need to do: prioritise and get stuff done."