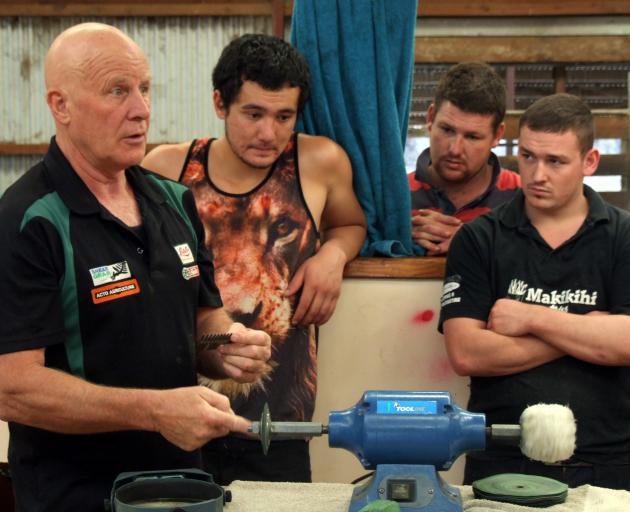 That is how World Shearing and Woolhandling Championships organising committee chairman Tom Wilson describes preparing for the event in Invercargill next week.‘‘Some things have happened easily and the next minute you’ve got to really dig in with something a bit more challenging. ‘‘It is a bit of a labour of love but you work through it. Everything’s falling into place,’’ he said.

Mr Wilson, shearing great Sir David Fagan and Gavin Rowland, from Shearing Sports New Zealand, made the bid at the previous world championships in 2014 to hold the 2017 event in New Zealand. The bid was successful and planning began in earnest for the championships which will be held at the ILT Stadium Southland on February 8-11. The championships have a 40-year history, dating back to when they were first held at Bath and West in England in 1977.Mr Wilson’s involvement stretches nearly as far, contesting his first world championships in Masterton in 1980.

The Scottish shearer finished third overall on debut and then became the first non-New Zealander to win a world title in England in 1984.

He teamed up with George Bayne to win the team championship in 1996 and was a member of the organising committee for the 2003 world championships in Edinburgh.

Once this year’s championships were secured, it had been a matter of ‘‘putting the pieces together’’ ever since and a lot of hard work and commitment had gone into it.‘‘Imagine the biggest roller-coaster in the world and being on it, that’s what it’s been like ... everybody’s got a job to do, we’re all getting on with it,’’ he said.Mr Wilson was thrilled with the support for the event, both from competitors and  the  public.

In the all-nations event, held before  the championships, there were probably about 400 entries across all grades which was ‘‘phenomenal’’.

The 32 countries entered in the world championships was a record; it had never been above the mid-20s, he said.‘‘It’s unheard of to get this many attending on this side of the world. We’ve put in a lot of hard work to get these countries to come to New Zealand.‘‘Our main focus with our proposal at the beginning was on getting as many countries as possible here. We told them we’d look after them and would give them training sessions over here which we are going to do. That was a big drawcard for them.’’A two-day training event, featuring top instructors from around New Zealand, was being held at Mt Linton Station in Southland on February 1 and 2. Mr Wilson believed the large number of lead-in events had also played a key role in the strong international attendance.

There were so many competitions, in both the North and South Islands, which gave the teams practice on some of the best shearing sheep in the world before they had to perform on the world stage.

At a recent shearing competition in Lumsden, there was only one New Zealander in the intermediate shearing final; the rest were all from overseas.There had also been great support for the championships from the local community. ‘‘Right from the outset, the Invercargill city and Southland region have got behind us and it hasn’t wavered the whole way through.’’Ticket sales had been incredibly strong, Mr Wilson said.He was not making any picks when it came to potential victors but believed New Zealand’s representatives should ‘‘really be up there’’.

New Zealand is represented by shearers John Kirkpatrick and Nathan Stratford, woolhandlers Joel Henare and Mary-Anne Baty and blade shearers Tony Dobbs and Phil Oldfield.After all the hard work that had gone into planning for the championships over the past three years, Mr Wilson acknowledged it would be a strange feeling when it was over.‘‘Maybe we should start planning another one,’’ he quipped.