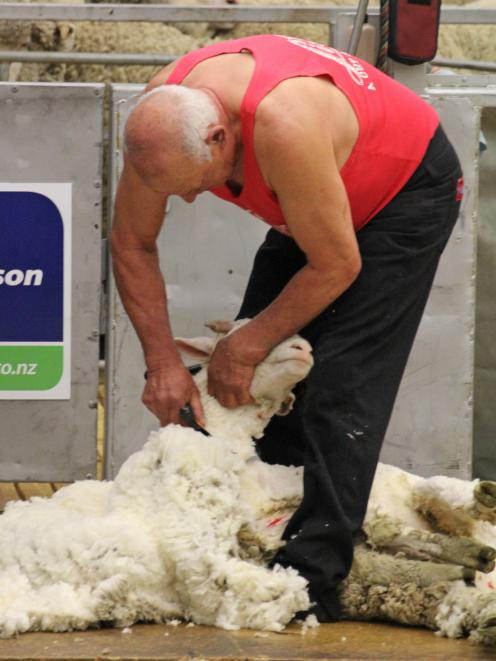 Rakaia shearer and Shearing Sports New Zealand South Island committee chairman John Hough makes the first blows of his Last Stand tour at the New Zealand Merino Shearing and Woolhandling Championships, at Alexandra, earlier this month. Supplied photo
When his mates got wind John Hough was making his ''last stand'', they thought they would go along for the ride.

The Rakaia shearer and Shearing Sports New Zealand official who will only admit to being ''not 70 yet'' began shearing at 18 and first competed in open-class shearing 40 years ago.

This season, he decided to make his ''last stand'' before ''retiring'' and contest 21 competitions in the shearing sports circuit culminating in next year's Golden Shears, in Masterton, and New Zealand championships, in Te Kuiti, where a corporate table will be waiting.

There will be at least six others at the table, because his mates decided he would not go it alone and the retired shearers formed the ''Last Stand'' gang to make the road trip with him.

When Courier Country spoke to Mr Hough he had already shorn at each of the South Island competitions to date and had been heard to say he hoped he would ''come right by the end''.

Mr Hough, who is New Zealand-born, but whose parents were Chatham Islanders, began shearing in the Riversdale area, near Gore.

He had started out working at the fisheries in Christchurch but decided to follow a ''couple of guys'' down south to work with Rangi Te Maiharoa's gang, starting out as shed hand. He moved on to shear for Frank Herbert.

''Two guys had a great influence on me, were George Page and Don Reriti, both from the Chathams.

He was not that impressed with his performance in his first shearing competition, so he left it about three seasons before he decided to give it a go again and has had steady success through the years.

Although a tilt at a Golden Shears open has eluded him he was accorded Master Shearer status in 1986 and featured in a world three-stand ewe- shearing record in 1989.

He has been a New Zealand team manager and was a judge at the 2008 World Championships in Norway.

He said these were highlights but there may be more to come.

''I've been lucky enough to be chosen to manage a team to go to Ireland, in May.''

The former instructor has some advice for those starting out in their careers.

''Get on a Tectra course. Get a bit of an education. [And] get a trade under your belt.''

It would stand them in good stead because many find, when they have to give away their shearing careers, they have few options left open to them, he said.

Shearing was still a good way to see the world, he said.

''They can shear here and go over to America, Italy, England, Norway, Australia''They might not make much first couple of years [but] it's still a good stepping stone.''

Mr Hough said he had not worked as a shearer for about eight years, ''just for the guys [farmers] around here''.

He had been doing a bit more recently to get fit enough to compete, he said.

The story has it there was a bit of a yarn at the Tinwald Tavern, in Ashburton, which led to the formation of the Last Stand gang.

Mr Bull, of Ashburton, and reportedly the youngest of the group, said he wanted to support ''Huffy'' as he is known to his mates. He was a ''real neat fella'' who had taught him a lot.

The community had really got behind the idea, too, he said. Ashburton's Mainland Wool was supplying a van, others had chipped in offering to supply fuel, team T-shirts and the like, he said.

Mr McLaren, of Hinds, who would also not reveal his age, said being a retired shearer was a prerequisite to make the team.

He had been in shearing school, at Burnham, when he first met Mr Hough, who was not only the instructor but ''taught a few life skills'' along the way.

Mr Wilson, of Darfield, said it was ''an honour'' to be there as support.

''He's a legend in the industry. When somebody can still pump a sheep out, at his age, it's amazing.

Courier Country will report on the Last Stand's progress throughout their tour.