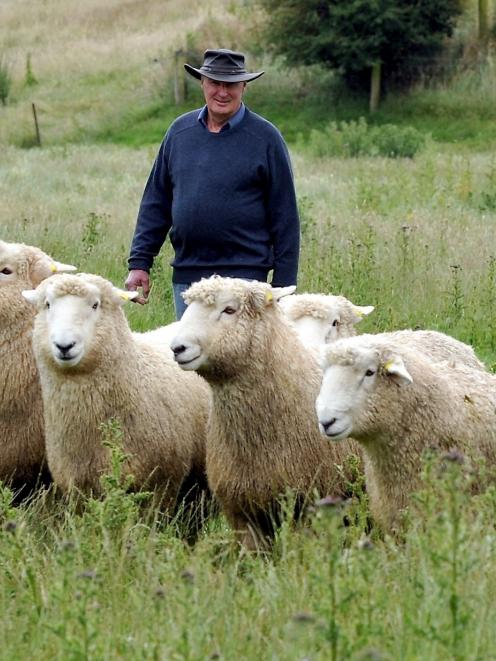 David Robertson with some of his Romney rams at home on his Palmerston farm. Photo by Craig Baxter.
Thirty years after his birth, two offspring of a Romney ram, owned by Otago stud breeder David Robertson, will go through the sale ring in Gore tomorrow.

Aurora 105-84 might be long gone, but his genetics live on three decades later, thanks to what was initially a practice exercise in artificial insemination for Mr Robertson's veterinary surgeon son.

Mr Robertson, who farms at Palmerston and is a third-generation stud-breeder, admitted it was an unusual situation.

''It's like meeting an old relation you thought was dead, really,'' he said, laughing.

Aurora 105-84 was born in West Otago, where the Aurora stud flock was founded, and Mr Robertson described him as an ''exceptional'' ram, while his mother and grandmothers were among the most productive ewes in the flock.

His male progeny were sold throughout New Zealand and were also exported to Australia and Argentina. One, Aurora 500-89, won the prestigious Blue Ribbon award for Romney ram hoggets and sired a ram that sold for a world-record price of $45,000. Another ram sold for $30,000.

Nearly three decades after 105's birth, Mr Robertson was desperately looking for some outside genetic material to use in his flock.

Coincidentally, his son, also named David, who is a partner at the Veterinary Centre, based in Oamaru, was keen to get into artificial insemination of sheep. He has his own Southdown stud.

He was doing a specialist course in AI and asked his father if he could practise on some of his ewes. Mr Robertson sen got thinking about 105 and contacted animal breeding specialist Julia Aspinall to see if there was any chance that some of the ram's semen might still be in storage.

Fortunately, there were 50 straws, kept in liquid nitrogen, and half were used by Mr Robertson jun and his wife Abby, also a vet, to inseminate the best 25 ewes in the Aurora flock in the 2012 mating season.

It was an interesting exercise to see whether improvements had been made in breeding in the intervening years, or not.

''It was something I just had to do. One of those `have to do' things,'' Mr Robertson sen said.

Lambing, that year, proved to be an exciting time, as he awaited the arrival of the AI offspring.

''When the lambs were born, they looked so like the sheep that I remember. A stud breeder knows when he's got something good ... I knew I had something special,'' he said.

He selected three of the best ram lambs to use as sires last year and described the quality of the offspring as ''outstanding''.

Mr Robertson sen had previously been using outside blood in his stud and he was disappointed with the results he was getting. He knew and understood his own genetics and knew the ram was reliable.

Passionate about sheep breeding, he said he was ''appalled'' and frustrated at the state of the sheep industry in New Zealand.

''It's the inability of the sheep industry to find a future. They are so busy trying to save the past,'' he said.

• The Romney ram fair in Gore is part of the South Island premier ram auction, which is being held at the Gore showgrounds tomorrow, Wednesday and Friday.