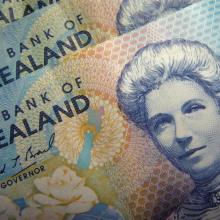 Photo: ODT files
Inflation is expected to have finally reached the Reserve Bank's 1% to 3% target band when official figures are released on Thursday.

Statistics New Zealand will release its consumer price index at 10.45am, and most economists are forecasting quarterly inflation of 0.2% and annual inflation of 1.2%.

``This would mark a return to within the Reserve Bank's target band after two years of straight sub-1% readings,'' Westpac acting chief economist Michael Gordon said.

The size of the expected turnaround in the annual rate was largely due to fuel prices. World oil prices plunged in 2014 and 2015, contributing to the undershoot in New Zealand's inflation rate during that time.

In particular, there was a steep 7% fall in petrol prices in the December 2015 quarter. That number would be dropping out of the annual calculation to be replaced by a 4% rise during the December 2016 quarter, he said.

Stripping out fuel prices gave a smoother path but told much the same story. Inflation bottomed out at the end of 2015 and had been increasing gradually since. However, it still remained low relative to history and to the 2% mid-point of the Reserve Bank's target.

Economist forecasts of 1.2% inflation were slightly higher than the Reserve Bank's estimate of 1.1%.

Mr Gordon said the difference probably reflected the fact fuel prices had risen since the central bank made its forecast in November. Fuel prices tended to be treated as a temporary factor and did not fundamentally alter the inflation outlook.

ASB chief economist Nick Tuffley's forecast of 1.1% was in line with the Reserve Bank but ANZ senior economist Phil Borkin was picking a higher quarterly rate of inflation of 0.3% but an annual rate of 1.2%.

Mr Borkin said in terms of the details, there would be some offsetting movements in the CPI.

Some tradeables prices that surprised in September should reverse, he said.

Subsequent strengthening in the dollar and retail competition were likely to see those gains at least partially reverse, he said.

Craigs Investment Partners broker Chris Timms said forecasts suggested a quarterly rate of 0.7% and annual inflation of 1.6% in December, compared with 0.7% and 1.3% in September.

Market pricing suggested the Reserve Bank was likely to remain on hold this year, although a few economists were still calling for another rate cut.

``For this to occur, we would need to see quite a disappointing outcome on the inflation front.''