Accommodation providers in the South have been hit with waves of cancellations, losing thousands of dollars in bookings within moments of Covid-19 restrictions being reimposed.

Cafes, restaurants and bars are all grappling with what they need to do to comply with Alert Level 2 and are anxious about following Auckland into Alert Level 3, which would have them shut their doors to the public. 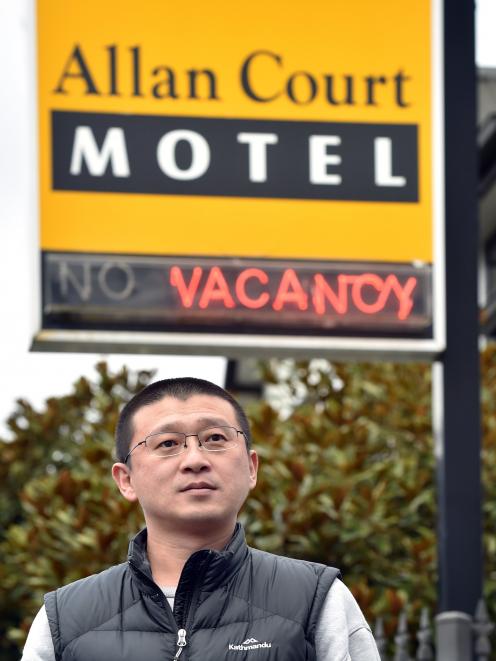 Allan Court Motel owner Peng Lee says moving back into Covid-19 restrictions is frustrating. PHOTO: PETER MCINTOSH
Auckland began its Alert Level 3 restrictions at noon and Otago and Southland - along with the rest of the country - went into Alert Level 2.

A University of Otago graduation has been cancelled and the Highlanders Super Rugby Aotearoa game against the Hurricanes will likely be played behind closed doors, as crowds of more than 100 are not allowed under Level 2.

Sunday’s ANZ Premiership netball game between the Southern Steel and the Mainland Tactix has been cancelled.

The restrictions and the cancelled events have led to a rush to cancel bookings at motels, hotels and other accommodation providers in Otago.

"It’s hard to say because [cancellations] are still coming in."

Mr Greenan described the rise in alert levels and resurfacing of Covid-19 as a "kick in the guts".

"It’s one of those soul-destroying things.

"After we’ve already fought our way back and we sort of felt like there was a bit of light at the end of the tunnel and then, bang, you’re back down on one knee again."

Millbrook Resort in Queenstown had a busy few weeks planned, but had already received requests to postpone reservations for the weekend.

Owner of five-star hotels Sofitel and St Moritz Graham Wilkinson said it was "another blow to an already crippled hospitality industry in Queenstown".

Allan Court Motel owner Peng Lee said his bookings for the weekend were likely to be down 70%.

"It is very, very difficult and frustrating," he said.

Under Level 2, people in restaurants, cafes and bars cannot order drinks at the bar and must be served by one person.

They must be kept 1m apart and sign in when visiting venues.

Queenstown’s Minus 5 ICE BAR was closed yesterday because of the restrictions, and managing director James Ace said there were real fears of job losses.

The company owned three bars and one soon-to-open venue.

"If we went back into a lockdown and there was no wage subsidy, we would have to let staff go, that’s the brutal facts."

Stuart St Mac’s Brew Bar co-owner Mark Fraser said after a couple of quiet weeks it was "gutting" to lose big events that would have brought people out in Dunedin.

"You need these sort of weekends to make it all worthwhile," Mr Fraser said.

"Level 1 to 2 is far more manageable than 2 to 3. Three is the clincher really. You go to Level 3, that’s a major disruption to businesses. That’s wasted stock, that’s staff at home.

"Some businesses did OK with takeaways but it’s no substitute to your business."

He hoped customers and staff would follow the rules because of the threat of Covid-19 spreading further and the disruption that would case.

Best Cafe owner Jessica Marks had quickly brought back contact tracing sign-in sheets and posters the business had put away in Alert Level 1.

"With current restrictions at the moment we won’t be doing any live bands or anything," duty manager Christopher Neho said.

"We’re all pretty good, calm and just making sure all the right procedures are in place."

"We knew it was coming," co-owner Evie Forno said.

"Everyone, in our store, has maintained that would happen and we know what to do from there.

"Hopefully, everyone else does what they should and we hammer it back like we did last time."

While anyone with sense can understand the frustration, those business owners who are affected by the changing Covid 19 levels need to focus and direct their anger where it needs to be.
That is on the self-entitled and selfish losers who are most likely the cause of the virus transmission, the idiots who breach their isolation conditions, who refuse for some spurious political or human right argument refuse to wear masks, the community leaders who spread ridiculous rumours and conspiracy theories, foment fear, anger and protest and encourage pointless mass demonstrations all of which have the potential to deepen the causes of these traders frustration.
Each and everyone of theses traders should be demanding that the authorities come down heavily on those truly responsible for their woes and demand that the media condemn those who show by their words and actions that they care not a jot about the welfare of the community.

And you are a perfect little angel that has never put a foot wrong in your life then you spout stuff like "That is on the self-entitled and selfish losers who are most likely the cause of the virus transmission", if you think these "losers" are the cause you are sadly mistaken, besides "Each and everyone of theses traders should be demanding that the authorities come down heavily on those truly responsible for their woes" which is who in your eyes?.

Exactly, that's why they need to seriously fine or jail all the rule breakers, as a deterrent for the rest of them who have a half decent amount of common sense. The overly-sympathetic and weak justice system in this country is the reason most people break rules.