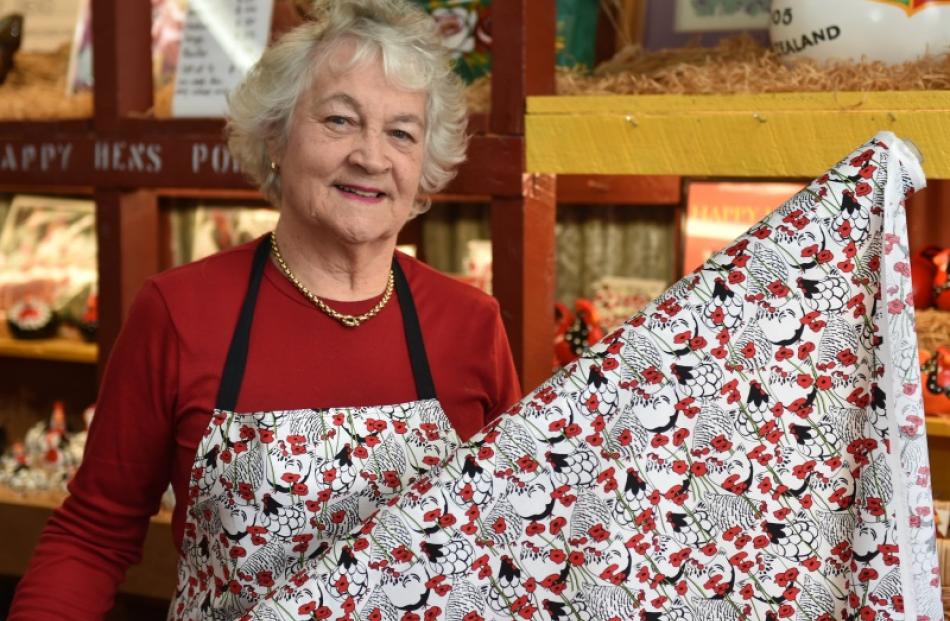 Yvonne Sutherland's Happy Hens have come home to roost in a field of poppies.

Mrs Sutherland, creator of the distinctive hand-painted ceramic hens, has designed fabric featuring hens and poppies to mark the centenary of World War 1.

Such was the fabric's popularity, it sold out within a week and a reprint was being done, which would be available at the end of December or early January.

The fabric was destined for Australian and United Kingdom markets, as well as to be sold in New Zealand.

Mrs Sutherland attributed its popularity to its fresh, unusual design.

The design was also very pertinent, given poppies were a symbol of war remembrance.

The cotton fabric could be used ''for all sorts of things'', from kitchen items to quilting, curtains and even skirts.

The fabric was sold to fabric retailers throughout New Zealand and was popular with quilters and patchworkers.

There was a ''huge'' global market for fabric artists, which she discovered when she had a set of Happy Hen designs made into cross-stitch kits using fabric from Germany and coloured thread from France.

''The need for home decoration can be seen in as long ago as the cave drawings and down through the ages with tapestries on castle walls, [and is] still with us today with wall hangings, curtains, cushions,'' she said.

She had sewers who turned the fabric into kitchen items such as oven gloves, tea cosies, place-mats, apron and cushions.

Recently, a visitor to the studio said she sold Happy Hen fabric in her shop in the Falkland Islands, and Mrs Sutherland said she had received an email from the United States showing a doll dressed in her fabric.

She sketched the design for the poppy fabric - her third fabric design - on the kitchen table at home at Portobello, while listening to family chatter, and later ''fine-tuned'' it.

''It's very satisfying to see creative ideas be manifested in all these different ways,'' Mrs Sutherland said.

Her intention was now to create a set of four different fabrics, all featuring Happy Hens and a variety of flowers.

The Happy Hens concept was first hatched in 1984 when Mrs Sutherland, then an art teacher, came up with the idea.

Originally, they were hand-moulded but, as demand increased, she taught herself the slip-casting method of production.

The hens were based on traditional poultry breeds.

Their popularity remained as strong as ever and ''the world'' came through her Portobello studio.

''Creativity doesn't slow down. It doesn't end,'' she said.