Investing in recycling pays off 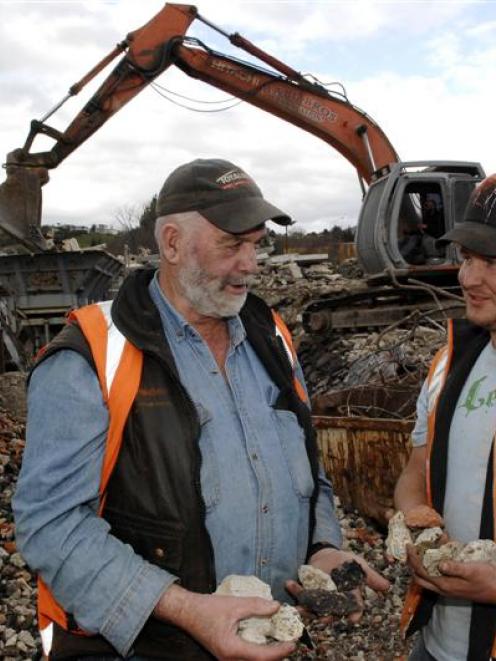 Hall Bros Transport Ltd owner Doug Hall (left) and contract manager Nic McEwan (right) discuss rubble from the concrete crusher behind them, at Burnside, Dunedin last week. Photo by Linda Robertson.
Making money from resources once destined for the landfill is at the heart of Doug Hall's business.

As owner of Hall Bros Transport Ltd, a Dunedin-based company, he is a strong believer in the efficiency of recycling and reusing construction waste.

By reducing the amount of construction waste going to landfill, his waste bill was reduced and his business became more efficient.

"To get efficient, you reuse."

Since the company was established in 1986, Mr Hall had invested more than $2 million in machinery which allowed the business to prioritise how buildings were dismantled and construction waste was reused.

"We are just looking to the future, trying to be one step ahead."

The only wood-chipper of its kind in New Zealand was bought two years ago, allowing trees and shrubs to be turned into chips for dairy farms.

The use of building waste for boiler fuel was also being trialled.

The company owned two concrete crushers, the first of which was purchased three years ago.

Both machines work all day, every day, turning concrete waste into aggregate for back-fill on construction sites and roading.

The Dunedin City Council roading contractor had already used 4000 tonnes of it.

Contract manager Nic McEwan presented a session at a Waste as a Resource Workshop at the weekend.

He spoke about what projects the company was involved in to help reduce waste going to landfill.

The event aimed to engage a range of industries and the community to focus expertise and ideas on how Dunedin's waste could be utilised as a resource.

Focus would move from recycling initiatives to resource stewardship, with the aim of achieving zero waste in the city by 2015.

The workshop was held at the Scenic Circle Southern Cross Hotel from 9am to 5.15pm, on Saturday.