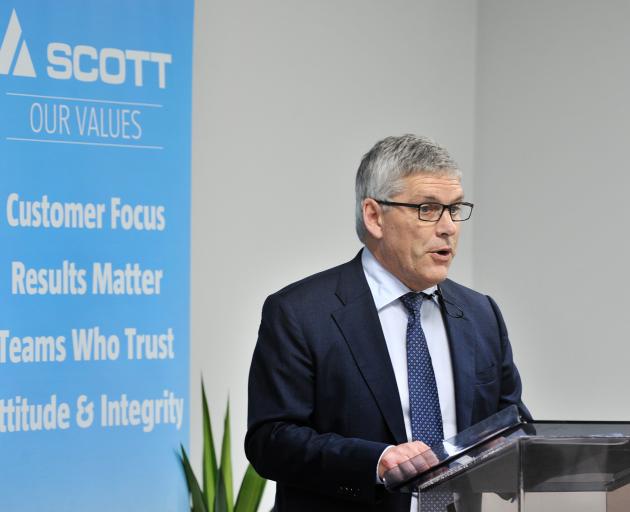 Chris Hopkins, a stalwart of the company for the past 25 years, half of that as managing director, has stepped down to "reflect", he said yesterday.

He has moved into the role of sales director with immediate effect.

Mr Kippenberger was chief executive of Manuka Health for the past three years, prior to that heading up the Australian meat and dairy business of George Weston and Premier Beehive NZ Ltd.

Speaking at yesterday’s Scott Technology annual meeting, chairman Stuart McLauchlan said the board was enthusiastic about the appointment.

“John has extensive experience in growing companies and delivering shareholder value and will be an outstanding leader of the company.”

Mr Kippenberger said he looked forward to working with the team and board to continue the growth of the company through ongoing investment in people, research and development, through operations in New Zealand, Australia, Europe, the United States and Asia.

"He has led the company strongly during his tenure, delivering on its diversification strategy and rolling out new technologies."

Scott Technology reported a 24% increase in revenues to $225million this year with a more sedate improvement in earnings before interest and tax of 4% to $20million.

Over the past 10 years the company has achieved a 19% compound growth rate, with an average compound rate of 30% over the past five years.

It handed shareholders an 8cent dividend per share for the current year.

Export-based earnings amounted to around $216million, representing 96% of revenues.

A large focus of the company under Mr Hopkins’ leadership had been research and development.

Last year its R&D bill was $14million, and the company boasts an IP portfolio with a range of trademarks and about 50 inventions, with 200 patents in more than 30 countries.

With its recent US and international acquisitions, Scott Technology now has manufacturing facilities in New Zealand, Australia, Europe, China and the US.

Last month the company was granted a $5.8million Provincial Growth Fund loan, which Mr Hopkins said would be used to set up an agriculture technology business unit dedicated to automation solutions and services for food processors, producers and suppliers.

"We are aiming for fast commercialisation of evolving technologies, specifically into the horticulture and agriculture industry."

He said the financial injection would allow Scott Agritech to explore opportunities across dairy, automatic weeding and spraying in horticulture.

Mr Hopkins had estimated the investment could bring around $30million worth of commercial benefits to the agritech industry, initially in Otago and the South Island.

Scott Technology shares were up 6c at $2.30 yesterday on the announcement.