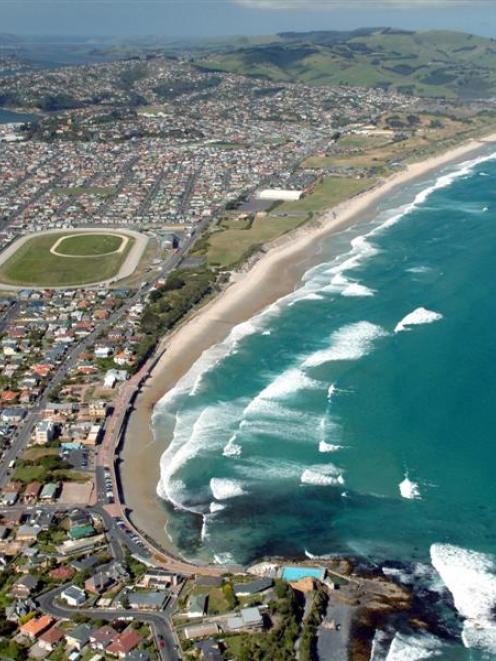 Labour has exempted family homes from capital gains tax, but rentals and holiday homes attract 15% tax. Pictured, St Clair in late 2007. Photo by Stephen Jaquiery.
Labour has several hooks to overcome in its bid to boost the government's tax take by more than $25 billion.

Labour proposes to introduce sweeping capital gains taxes (CGT) on a variety of assets, hike the top tax rate back up to 39c in the dollar for those on more than $150,000, introduce a $5000 tax-free threshold and remove GST from fresh fruit and vegetables.

While highlighting the top tax rate and CGT applies to only respectively 2% and 10% of New Zealanders, and that the $5000 threshold and GST will appeal to the broader voting population, the proposal is a gamble.

Both Labour and National want to undermine New Zealanders' reliance on the property market and subsequent credit spending sprees.

Labour's capital gains proposal is estimated to be worth $26 billion over 15 years, with the new top tax rate generating about $300 million a year.

Labour leader Phil Goff said the plan charted a course for a stronger, more resilient economy, and there would be no sales of state-owned assets.

"This tax switch is about creating a fairer tax system," Mr Goff said. "Under Labour, the overwhelming majority of Kiwis will end up paying less tax, not more."

National wants to plough ahead with a partial sell-off of state-owned enterprises, potentially worth up to $7 billion.

Dunedin-based Deloitte tax partner Peter Truman said while the CGT "would be workable", it carried several hooks in its overall complexity and cost to the community to understand, and Inland Revenue to administer, and could encourage the use of tax shelters.

"It will be interesting to see what is proposed in terms of existing assets. If these are excluded, then it may be some time before any significant level of tax is collected. If they are included, there may be a rush to realise assets prior to the new rules coming into effect," Mr Truman said.

Mr Truman said there could be practical issues to work through as to how an asset's market value was established when there was not a ready marketplace for a particular asset.

Labour estimates its CGT will raise $78 million in the first year, rising to $2.27 billion after 10 years, and would raise $26 billion during its first 15 years.

"It is likely to encourage individuals earning over this amount to look again at the use of companies, with 28% initial tax rate, and trusts, with 33% final tax, to shelter income from the 39% rate," Mr Truman said.

Craigs Investment Partners broker Peter McIntyre said a tax on shares for professional investors already existed. A CGT would assist in stopping speculators in the market taking "quick profits from sales", and could be aligned to the Australian model where the tax was stepped from high back to zero, depending on the length of time stock was held.

On the subject of losing GST from fruit and vegetables, Mr Truman said while retailers would initially reduce prices to reflect the GST absence, there were no guarantees that over time the retail price would not increase to former price points.