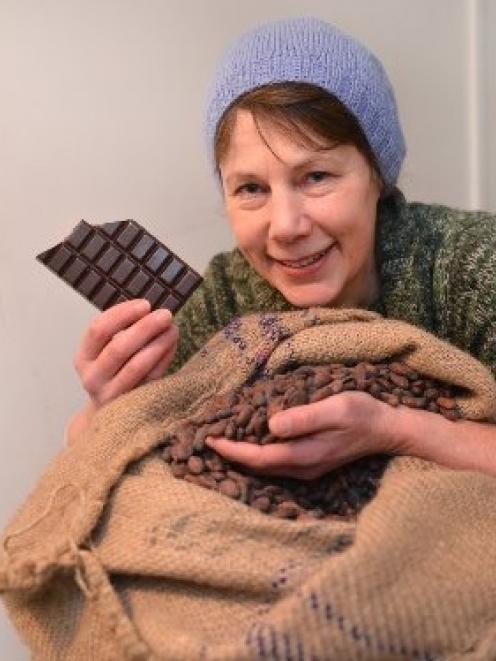 Chocolate-maker Liz Rowe with a block of her Ocho chocolate, made from Papua New Guinea cocoa beans, at the Otago Chocolate Company in South Dunedin this week. Photo by Stephen Jaquiery.
Life is sweet for Liz Rowe. The Dunedin confectionery-maker has been raising the bar for chocolate lovers and Fair Trade.

''I was really keen to make a single-origin, bean-to-bar chocolate, so people could see where they came from,'' Ms Rowe said this week.

''I'm really big on strong regional economics and I wanted to stay in the Pacific rim and focus on small bean growers and farmer co-ops.''

After sourcing beans in Papua New Guinea, she found the locals were equally happy to be part of the project.

''They were so excited when I went over there. There was a big banner across the road saying 'Welcome Otago Chocolate'. I think they thought I was Mrs Cadbury, or something,'' she said, with a laugh.

For the past three months, Ms Rowe has been making her Ocho brand chocolate from wagi, gogal naru and kiram beans in an industrial kitchen at Cargill Enterprises in South Dunedin.

It takes up to 36 hours to produce a batch. The beans must be roasted, cracked and winnowed, before being spun in large Indian lentil grinders warmed with fan heaters.

''The chocolate is single-origin, so every bar can be traced back to the particular farmer co-op in PNG where the beans came from,'' Ms Rowe said.

''It's been a lot of fun. I've now done four weeks selling at the Otago Farmers' Market and it's been brilliant. People have been so interested and supportive.

''I think part of the reason it's been so popular is because it's only made with two ingredients: cocoa beans and sugar. Most other chocolate has soy lecithin, vanilla and, often, cocoa butter added.''

White Rabbit Cacao, in Bannockburn, was one of the first artisan chocolate makers in New Zealand to focus on bean-to-bar, single-origin chocolate.