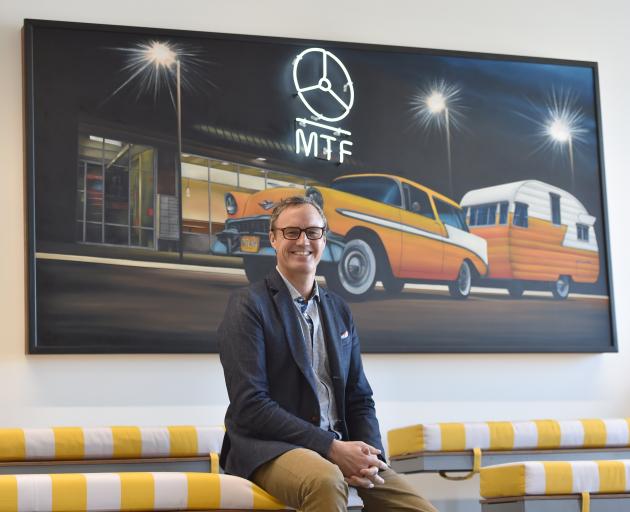 All things being equal, Chris Lamers should still be a notepad-wielding journalist.

For growing up in Hamilton, that was all he wanted to do. Studying English literature and Russian politics — "really useful stuff," he quipped — was a pathway to apply for the post-doctorate journalism course at the University of Canterbury.

Journalism taught him some important skills, including how to digest a lot of information quickly and turn it into meaningful messages.

Feedback was fast and the young journalist learnt fast. The newsroom was a tough environment, pressure was intense and there was no room to not deal with conflict.

He said leadership was often described as being able to paint a picture of the future that people wanted to follow, and that was what a journalist did — painting a picture.

Prior to joining MTF Finance, Mr Lamers spent five years working for an Australian-owned company. Generally, Australian-owned businesses were "a bit tougher" than their New Zealand counterparts, and he found it easier because of his journalism background, he said.

His first job in media was at Canterbury Television, then owned by TVNZ. But, after a while, he realised journalism was unlikely to be a long-term career for him.

"It probably was more about the reporting than the doing — I got more interested in the doing," he said.

He became increasingly fascinated by what people were talking about: about being in business and running a business.

He did some financial reporting and public relations work, and then moved into management roles.

Mr Lamers spent a decade in the tourism industry. He worked for Mount Cook Group before moving to Wellington where he led Positively Wellington Tourism and Tourism New Zealand marketing.

Tourism was a fantastic industry to be involved in — "you’re selling something you love and believe in" — and he loved how it could create wealth for people who otherwise would not have as many options.

He later worked for Loyalty New Zealand in a range of roles, including marketing, customer engagement and interim chief executive, and his most recent role was running the Australia-New Zealand revenue business for finance company hummgroup.

When the opportunity arose to work for a New Zealand-owned company, Mr Lamers was "pretty keen to do that".

Established in 1970 as a way for motor vehicle dealers to write loans for their customers, MTF Finance, first listed on the NZDX in 1994, is both a Dunedin and New Zealand success story.

It now has assets approaching $800 million, is wholly New Zealand owned and operated, and has 50 franchise offices — and growing — throughout the country.

While known primarily as a car financing company, it recently launched personal loans and it also does business loans.

Mr Lamers said the company was both iconic and not as well-known as it could be. The business had a "uniquely Dunedin feel" about it which could be taken nationally, and the potential for growth was "extraordinary".

As it expanded both its footprint and its customer base, Mr Lamers said he was even more excited now — as he completed his sixth week in the role — than he initially was.

It was a really good brand but it was not as well-known. It had great systems and processes but they could be made faster and better.

For a company that grew out of Dunedin, there was a sense of spirit about the business. It was not just about building a great business, but also about building great relationships, he said.

"The way we go about lending, setting up a franchise network, everything is based on making it a ... work for everyone situation," he said.

What he believed the company did have was an ability to change how people saw finance; utilising its "human factor" — the ability for customers to get personal service, whether through a phone call or an office visit, and the ability for that staff member to make a decision.

At a time when so many financial institutions were saying "how many branches can’t we have", MTF Finance was saying, "how many can we have".

Recalling the image of the older-style bank manager, who was the pillar of the community, Mr Lamers said: "we want to be that."

Two franchise offices opened last month, in Kumeu and Kerikeri, with more to come. The head office in Dunedin has 85 staff and there are 250 in the franchises.

"I think out of every business I’ve ever worked in, this is the one that has the most potential to really change how people see finance," he said.

Mr Lamers wanted to stop making finance "all about the difficult parts" and focus on how it could help the customer do what they wanted, in a fair way.

One of the things being seen in the generation change was the risk appetite around finance. Millenials were more deliberate in some of their financial decisions and they were terrified of credit cards.

The finance sector needed to ensure it suited how the customer wanted to experience it; it was about understanding what they wanted.

New Zealand also needed to continue to innovate in the sector as it was lagging behind at the moment, he said, to ensure Kiwis got the same experiences being seen globally. And he was keen to work with as many people as he could to help drive change in the industry.

While he lives in Auckland, Mr Lamers is in Dunedin for a few months full-time.

The way of working had changed, and a huge chunk of MTF Finance’s business was in the North Island.

While it was Dunedin-based, it had people living in the likes of Alexandra, Christchurch, Invercargill and Middlemarch.

Mr Lamers said there was not much difference to living in Alexandra and driving two-hours to Dunedin, or in Auckland and a two-hour flight.

But it was equally important to remember that it was a Dunedin-based organisation — "and it’s our home".

He did not want the nearly 52-year-old company to lose that specialness. Covid-19 delayed celebration plans, but one would be held.

It was fantastic heritage to have and being at the helm of such a business was also a big responsibility, and one Mr Lamers did not take lightly.

"I’ve got stewardship of this organisation for a period of time — hopefully a reasonable amount of time — you just want to leave the place in a better place than when you arrived.

"The people that led the organisation before me have done an amazing job. If I can pick up the good work and continue to grow that, I’ll be really happy."

When it came to his own leadership style, Mr Lamers said he once heard a quote that "leadership is a gift that is given to you by those that choose to follow".

For him, it was about building "awesome" teams and having some fun along the way, while also acknowledging why the company existed and delivering on its promise every day.

Enjoyment at work was all-important for Mr Lamers. While there was much talk recently about what had been dubbed The Great Resignation, he believed it generally came down to not liking the company or the person they worked for.

"If you have great teams and really believe in an organisation, you’ll keep working there."

He always had the attitude that, if he did not enjoy his job, he would quit and get another — and he had stuck with that. "Every job I do I love, because life’s too short," he said.

Head office had a resident office dog called Murphy who belonged to one of the team members. Most days Murphy was around — "he’s pretty confident ... he comes into meetings".

And if there was ever a tense situation, being able to spend a few minutes patting a dog "makes everyone feel a bit better".

When it came to recruitment, Mr Lamers had been impressed. If people had not heard about MTF Finance then they had researched the company, and it had a very good reputation so that helped, he said.

Secondly, people were looking for a job at an organisation which had a good purpose and where they could also "make a difference".

Mr Lamers said diversity of thinking and background in an organisation was important: getting people into the business with different perspectives and then giving them a voice.

MTF this week announced it would be partnering with the Institute of Directors to offer a directorship skills programme to originator shareholders. The programme aims to give hands-on experience to future directors, to make sure they have the skill sets they need.

Having lived in the other three major centres in New Zealand, Mr Lamers was enjoying life in Dunedin.

Whether it was sussing out good places in the city — "once you find them, they are amazing" — the all-important good coffee, proximity of good running trails or the captivating street art, living in the South was "just easy".