Beef cattle graze beside Nolan Rd in Okura in South Westland. Photo: Stephen Jaquiery.
One of the biggest weaknesses — and thus opportunities — for the meat and wool sector is the lack of a coherent New Zealand "brand" internationally.

Farmers, meat and wool processors, farm advisers and farm support business were among those canvassed for their views on the biggest risks and challenges for the sector.

The report’s author, industry economist David Norman, said the lack of a brand was a recurring theme. 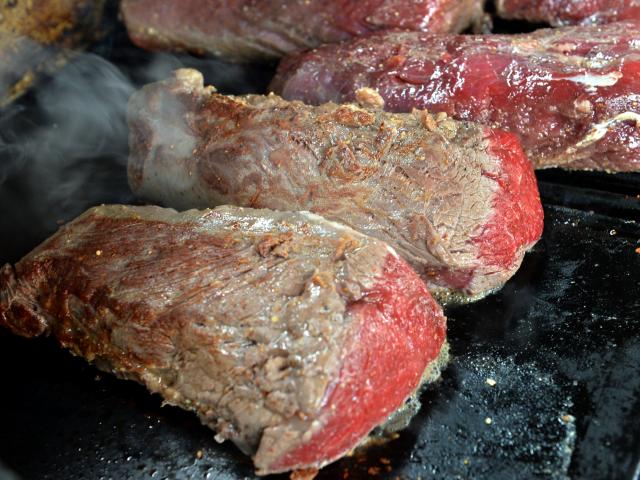 Photo: supplied.
But it did not mean all meat and wool products being sold under one label; individual companies were adamant they wanted to keep their own brands.

"No-one proposed that there should be a single desk like Zespri. But the idea of New Zealand beef or New Zealand lamb being promoted jointly by processors, exporters and industry bodies, with marketing budgets pooled, has not eventuated, with unsurprisingly hit-and-miss results," Mr Norman said.

Instead, each processor and/or exporter was doing their own marketing, and the focus appeared to have been largely on securing export quantities, rather than commanding a premium for New Zealand-produced meat and wool.

Meat and wool accounted for $8.1 billion in exports in the year to August. Exports had risen by $1 billion in the last four years — predominantly in beef — but the sector faced a variety of challenges.

Sheep numbers peaked at 70 million in 1982 and had "plummeted" since then, falling from 39 million to 29 million in the 11 years to 2015. Some industry sources expected sheep numbers to fall even further, possibly to 25 million or even 20 million over the next several years.

Processing the large number of lambs produced by a 70 million sheep flock required a lot more capacity than that required today.

The sector had a "massive" oversupply of capacity for operations for 60% of the year and a sizeable over-supply all year round.

The large number of plants — more than 60 significant processing plants were in operation — seemed economically inefficient and most industry sources agreed.

However, some pointed out that continuing to operate the large number of plants was financially rational.

Sources, both processors and others, unanimously pointed to the fact that current labour agreements would make it so expensive to close plants that it was more financially sensible to keep operating.

Even generating marginal profits that offset fixed costs was viewed as better than closing plants in areas that were over-supplied with plants, or where plants were barely paying their own way.

Processors were also worried about losing market share by closing in any geographic location.

Processors were also challenged in terms of cash flow, which again limited the likelihood of a processing business making a major change, such as closing a poorly-performing plant.

Industry sources were generally of the view that the current structure of the sector could not remain unchanged.

Some argued the sector was not "broken" as processors were reacting rationally to the situation they found themselves in. But it was certain  something would have to change and several plant closures were expected over the next five years.

There had been some positive outcomes from an "otherwise dire situation". Most notably, industry sources suggested there had been significant efficiency gains in processing as processors had been forced by the strong level of competition to find ways to reduce costs.

Exporters had also had to be more innovative in marketing to try to garner higher prices so they could pass some of those benefits on to farmers to secure supply.

The current strength in beef exports — the stellar performer in the sector — was expected to weaken and was already beginning to do so. Increased competition from Brazil, in particular, was making New Zealand beef less attractive to the US market.

Ongoing challenges in accessing capital were expected, due to poor returns in the sector and the difficulty in getting Overseas Investment Office approval for offshore investment.

Anti-trade sentiment and protectionism was tipped to continue to grow, resulting in the use of non-tariff barriers to restrict trade, and increasing uncertainty  about market access.

Compliance costs and regulation would increase and overseas markets for wool would change. China would be less of a player, and New Zealand would need to access new markets such as Vietnam that would increasingly undertake textile manufacturing.

Opportunities for growth would be driven by higher prices for products and by lower costs of production, rather than by volume increases as the number of sheep and beef cattle continued to fall.

New Zealand had largely failed to communicate the right ideas about its meat and wool products and a more concerted effort was required to "tell the story" of New Zealand meat and wool, and to create preferences for products in the way some other sectors had.

Rather than grass-fed animals raised in New Zealand selling at a premium, they were sold because they were cheaper than animals produced elsewhere. Meat and wool products were highly commoditised.

Several industry sources suggested New Zealand’s grass-fed livestock produced better meat than grain-fed overseas competitors. But when pressed as to how that had been ascertained, or whether it was reflected in pricing, it was evident that was a New Zealand-held belief rather than something translating into premiums internationally.

New Zealand faced the challenge of changing international market preferences. There appeared to be huge potential for capitalising on the New Zealand "story" but the New Zealand brand, if a premium was to be attracted, needed to appeal.

"Little is being done to tell the story of how animals are farmed in New Zealand, including sustainability efforts, animal welfare, and where the meat or wool is from. Yet other products around the world are capitalising on the consumer’s desire to be closer to the product," he said.

As well as better co-ordination among processors and exporters, individual firms should also look to promote their own brands internationally.

There had been examples of exporters using their own branding "quite successfully" overseas and even domestically. A premium, well-presented brand might generate more revenue per kilogram.

There was also huge potential to take advantage of maximising the price paid for individual cuts or co-products. The question was how to maximise yield per carcass from the 70% of the animal that was not a premium cut.

Some exporters were doing that by developing a wide mix of customers who were in the market for different parts of the animal. Another possibility was an increased role for venison.

The most promising opportunity was the rise in exports of chilled products. If access to China was finalised soon, another huge opportunity to extract a premium would materialise, the report said.

Co-products also offered huge opportunities to increase revenue per animal although results had recently been mixed.

Prices for  some co-products, such as casings and tripe, had  fallen  but other potential uses, such as pharmaceuticals, might develop.

The challenge of transporting animal products internationally meant, at this stage, any scale operation using New Zealand-sourced co-products would likely need to be based here.

At present, there was not a large New Zealand-based pharmaceutical manufacturing plant taking advantage of New Zealand’s meat production.

The development  of retail-ready products was one way to try to capture more value by vertical integration, but there were other ways to substantially increase capture.

For example, exporters needed to improve direct access to food and beverage or supermarket chains in export markets, rather than dealing through an importer.

A further example existed in the wool sub-sector where businesses needed to integrate across scouring, spinning and cloth-making to capture a greater share of the value of the product.

New Zealand’s major meat and wool export markets had changed substantially in the last several years. The two largest export markets — China and the  United States  — had grown in their dominance of exports, while the share going to other countries had fallen in absolute and percentage terms.

Increasingly, exports of meat and wool products were becoming concentrated in just a handful of markets with the top nine countries taking 74% of exports, up from 67% in 2012.

That exposed New Zealand exporters to risks, especially with 52% of exports going to just three countries.

Biggest risks and challenges faced in the sector

• Overall export weakness for products other than beef, with gains in that product at risk in the US market.

• Growth in competition from increasing number of countries trading meat and wool products, rise in synthetic fibres and growth in popularity of cheaper protein like chicken.

• Rise in non-tariff barriers and emerging risks to free trade.

• Increasing risks to the sector maintaining approval from the public and government to operate as it currently does.