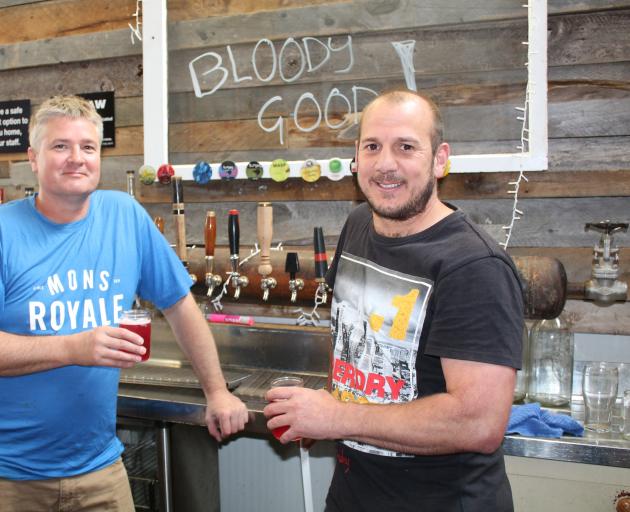 Bloody Good Brew Co director Sean Woodward (left) and general manager Simon Walker celebrate before the launch of the company's new brand. Photo: Supplied
Invercargill Brewery has changed its name in the wake of the company's financial struggles as the new ownership group embarks on a fresh start.

The brewing company went into receivership in March this year after failing to pay secured creditors.

It was bought by Simon Walker and Sean Woodward. Mr Walker was appointed general manager in an attempt to try to overcome the financial problems at the award-winning brewing company.

''I signed up for a six-month stint initially, but there is something moreish about this business. I'm excited to be part of the next chapter,'' Mr Walker said.

He moved to Southland in 2008 and managed Tio Operations after Bluff Farmed Oysters went into receivership in 2009. That business was closed by the Ministry for Primary Industries earlier this year following the discovery of Bonamia ostreae on Stewart Island.

Mr Walker believed it was time to officially discard the old Invercargill Brewery brand, and the company is to be renamed Bloody Good Brew Co.

''There's been feedback over the years that Invercargill is a poor brand nationally, so we thought, 'OK, let's retire that and see what a change will bring'.

''All of us bought into Invercargill Brewery because its beers and core staff were too good to let go.

''We're proud that we're an indie brewery, that we're a Southland-owned company, and that we make awesome beers,'' he said.

Invercargill Brewery founder Steve Nally, who was the major shareholder and director of the company which went into receivership, will stay on with Bloody Good Brew Co in a brewing capacity.

The Invercargill Brewery logo will be formally retired after the Dunedin Beer Festival on Saturday. Invercargill firm Emotive Design will design the new look.

The Invercargill beers were top of the range. It’s a real pity to see the brewery fold, although good luck to the new owners.
Could I suggest you could have chosen a better name. I do not think the one selected has a scintilla of class, unlike the beers.