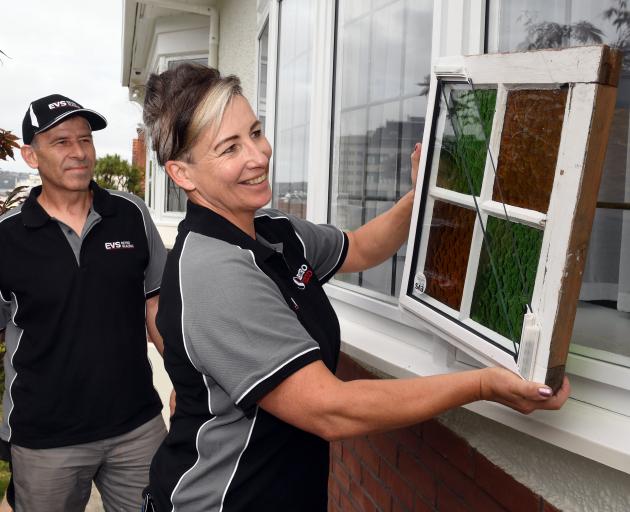 Cathy Mann and Mike Hodges have developed a triple-glazing window product which reduces the cost of insulating wooden windows. Photo: Stephen Jaquiery
Running out of money while building their dream home in Central Otago has had somewhat of a silver lining for Dunedin couple Mike Hodges and Cathy Mann.

The couple have been building a spectacular two-storey straw-bale house above State Highway 6, south of Queensberry, featuring a curved roof and round walls.

It featured on the New Zealand version of popular British television programme Grand Designs in 2015 and has been an ambitious long-term project.

The house was still not completed and the couple returned to Dunedin two and-a-half years ago, needing short-term employment.

It was the creativity and "thinking outside the square" from building their house that probably led to their latest venture, Ms Mann said.

"We've never done anything inside the square."

Mr Hodges worked in a glazing company that specialised in retrofitting timber windows, while Ms Mann got a job with a joinery company, manufacturing windows and doors.

Back in 1981, she was the first female joiner in Otago-Southland - not that she gave that much thought at the time, describing herself as "just a country girl that liked playing with hammers and nails".

After they finished their employment, friends and family members wanted their homes retrofitted with double glazing and Retrowood rapidly turned into a full-time business.

They developed a way of retro glazing character homes, using a new triple glazing system which they said was much more cost-effective than simply retro double-glazing.

The solution was an external secondary glazing panel fitted to the outside of a timber window; it was faster to install and could provide double or triple glazing results.

They started exploring ways to make the process easier and quicker. The biggest challenge had been to find a way to prevent condensation accumulating inside the window panels, a common problem shared by most secondary glazing systems.

Warm air from inside a house carried moisture that could get trapped inside secondary glazing, causing blooming or condensation, they said.

A special venting system was developed to remove the moisture and maintain dry, fog-free glass while maintaining thermal insulation.

Now they were keen to take it to the global market, Ms Mann said.

Global patent applications had been lodged so EVS - based on the acronym of External Vented Systems - could be sold into new markets.

One of their early clients, Dr Argy Song, who is also a property developer, became a partner and helped negotiate with a company in China to manufacture the new profiles.

Demand for EVS glazing had increased to 75% of their business, resulting in the need to find more staff and bigger premises to cope with increasing demand.

Their aim was to establish a franchise network of installers and manufacturers around the country.

There was an opportunity to make older social housing warmer and dryer for tenants, while saving landlords money and time getting their properties into a more healthy condition.

There was interest to start a franchise in Australia, which was hoped to be going by the end of the year, and that would provide a solid framework to enter other countries in the future.

As for the Grand Designs home? It was still a holiday destination and the plan still was to complete and live in it.

They continued to have a strong vision for the project, Ms Mann said.