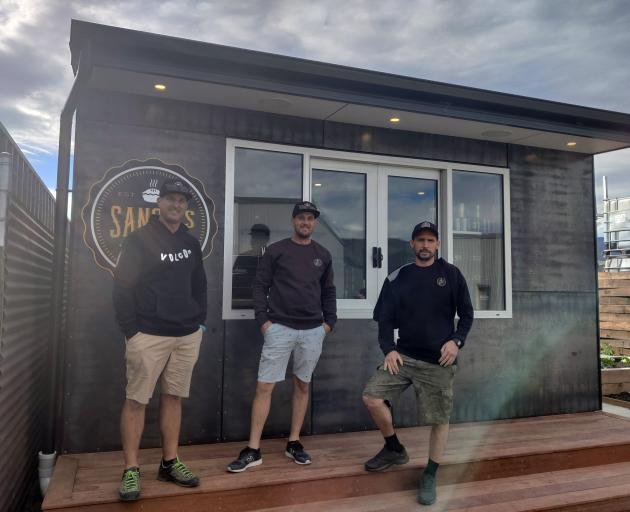 Business has been booming since brothers Chris and Rob Sangster, along with their foodie friend Miro Kollar, opened a pie shop and bakery in Cromwell in November last year.

As tradies with their own construction business, pies were a "staple" — "I’ve eaten a lot of pies in my life" — but Chris Sangster said he was struggling to find a decent one in the area.

He was also keen for a change from building and hence Sanga’s Pies was born. While he had been involved in some other foodie projects, he had never made pastry before the doors opened.

A few concoctions were tried and there was "a wee bit of winging it" but it appeared they had the recipe right as sales were increasing every week, he said.

Opening a business during a global pandemic did not deter the trio. One thing that was very evident was that "everyone still needed to eat".

"People still need to have a pie in their life," he said.

What Mr Sangster did discover was how sought after a good pie was. They had people driving from as far afield as Invercargill just to try their pies.

Winter definitely also saw an increase in pie consumption "because it’s bloody cold out there and the best thing for it is a pie".

"If they’re done right, you can’t really beat it."

Asked what their point of difference was amid a plethora of pies on the market, Mr Sangster said they "aren’t just your run-of-the-mill pie".

And for those traditional offerings such as steak and cheese, they put a twist on it by using cold-smoked cheddar cheese and mozzarella.

The pies were also named; mince was the Baby Boomer — which seemed to be the target market for mince pies — corned beef and mustard sauce was named the Southlander, a seafood creation was called Keep it Deep and pork belly was known as Underbelly.

And, in a special nod to the Sangsters’ late father, their curried sausage pie was known as the Duncan, paying homage to "a man of curried sausages", particularly when their mother Jan was away and he was on cooking duty.

Being based in the town’s industrial area meant they dealt with a lot of tradies but they also had people from "all walks of life" coming into the shop, Mr Sangster said.

They were selling between about 350 and 400 pies a day and they also had four outlets that they supplied wholesale, the furthest north being The Greedy Cow Cafe in Tekapo.

But the intention was not to get too big, as they did not want to jeopardise quality.

Mr Sangster, who is also an electrician, said he was now in the bakery full-time, making the pies with Czech-born Mr Kollar who was the chef and "mastermind behind most of the recipes".

Mr Sangster is still involved in the business side of the construction firm which Rob Sangster continues to run.

His own pie consumption was limited to about one a week, although he always tried out new varieties.

Support from the local community had been "amazing" — "one of the shocks of it was how many people were coming in just because we were trying something new" — along with that of family and friends.

They endeavoured to source as many local ingredients as possible and had their own garden to provide fresh produce, Mr Sangster said.