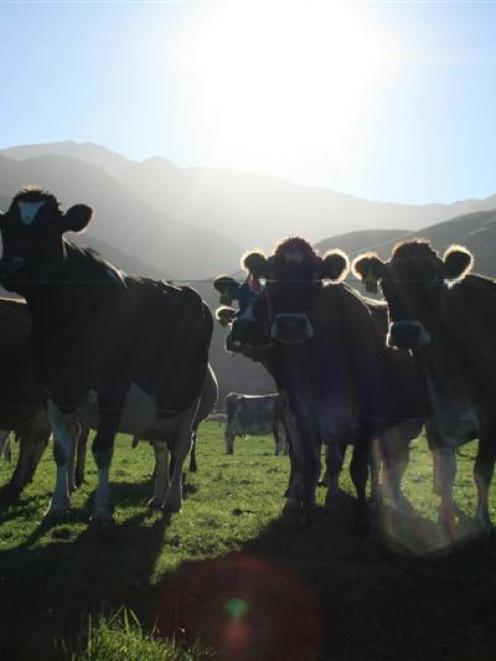 The sunshine of this season's milk payout is now under a cloud for next season's payout. Photo by DairyNZ.
The extent of massive dairy debt is again attracting the attention of the Reserve Bank and economists, amid expectations the seasonal payout is set to take a hit.

The fortnightly global dairy auction saw further price declines of 1.8%, to the lowest levels in 15 months, and there is speculation the new season's inaugural forecast could be down by more than $1.50, to $7 per kilogram of milk solids (kg ms).

While the auction price decline was not unexpected, and did not ring alarm bells, it increases the likelihood of the new season payout forecast being much lower, dragging more heavily on the country's terms of trade and diluting debt-laden dairy farmers' income.

The lower prices are attributed to supplies increasing from international competition and Fonterra's own estimated 11% production boost this season.

Prices were down by more than 20% since February, when Fonterra announced this season's record forecast $8.65kg ms payout.

Fonterra's forecast for the coming season is expected to be set at the end of next week, before the next dairy auction.

The further price slide - the seventh consecutive decline - resulted in the New Zealand dollar weakening against the US dollar and touching a nine-week low against the Japanese yen yesterday.

''This [latest decline] fits within our view that dairy prices would be lower this year,'' he said in a statement.

Westpac chief economist Dominick Stephens also believed the new season payout forecast next week would be well down, at around $7.10kg ms, while also picking the present season forecast would be downgraded, from $8.65 to $8.50kg ms.

Because the dairy sector carried the majority, or about 65% of all agricultural debt, and half the dairy debt was held by about 10% of all farmers, the Reserve Bank was watching the sector closely, he said.

''Consequently, dairy debt has the potential to create risks for the financial system, and farmers, if dairy prices were to fall sharply, or if there was an extreme weather event, which disrupted production,'' Mr Stephens said.

He noted one of the largest costs for dairy farmers was rising, as 70% of dairy debt was set on floating mortgage rates.

Many farmers had this season opted to use additional cash flow to reduce debt.

Mr Steel said aside from rising global milk supply and Fonterra's estimated 11% production lift, there had also been a ''strong start'' to the European season and more milk supplied from the United States.

''We also wonder how demand in China and Russia, big importers, is holding up,'' he said.

He said the latest 1.8% auction price decline was the ''latest evidence'' that New Zealand's terms of trade would decline later this year.

While other primary product prices remain robust, lower dairy prices are a large part of our forecast 10% decline over the coming 12 months,'' Mr Steel said.

But before that decline materialises, Mr Steel expected next week's new season forecast by Fonterra will give a sense of ''of the sharp price drop'' for New Zealand.

''We have long forecast a substantially lower dairy payout for the 2014-15 season, compared to the 2013-14 season just ending,'' Mr Steel said, citing the 22.6% price drop since February and the persistent strength of the New Zealand dollar.

While highlighting that forecasts were changeable throughout the milking season, Mr Steel maintained the next week's new season forecast would be around $7kg ms.

While a lower forecast payout was ''unlikely to surprise'' farmers, and was not desirable compared with this season's record price, ''it would be manageable'' for farmers, he said.