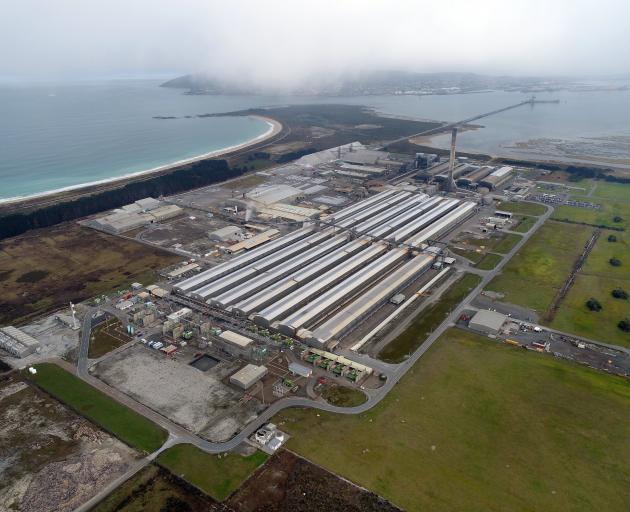 Even though the Tiwai Point smelter has been under threat since 2013, it will close next year with no apparent plan on alternative uses for electricity it has needed. PHOTO: STEPHEN JAQUIERY
With the closure of the Tiwai Point aluminium smelter next year, $400 million will be taken out of the Southland economy, 2600 jobs will be lost, and yet no plan has been devised to make the most of the massive amount of electricity that will no longer be used. Gavin Evans, of BusinessDesk, looks at the issue.

The 2600 jobs to be sacrificed in Southland next year are a high price to pay for confused energy policy and a multi-decade decline in this country’s economic ambitions.

Despite the writing being on the wall for the Tiwai Point smelter since 2013, the plant - one of the world’s lowest-carbon aluminium producers - will close next year with no apparent plan on alternative uses for the 5000 gigawatt-hours of renewable electricity its closure will release.

Only about half that supply can be squeezed on to the national grid any time soon. Such is the mistrust of operator Rio Tinto that we don’t even know what the process and timetable for shutting the smelter is; in seven years, no-one in government has ever bothered to ask.

It would be laughable if it wasn’t so shameful.

Other countries would kill for the abundant hydro and wind resources of Southland. Yet in New Zealand, where successive National and Labour governments have spouted piously about the long-term advantage renewables will give this country’s exporters, or the new firms that will be queuing to set up business here, we simply turn our back on them.

Rather than apply the smelter’s current 572MW supply to build new industries, the best we can imagine is to reward ourselves with lower power prices - for a few years. We pretend the bounty of an oversupplied power market will speed the uptake of electric vehicles - except we haven’t bothered mobilising that technology either.

Talk has been cheap.

The smelter’s closure will suck more than $400 million out of the Southland economy and damage thousands of families.

All the Government could offer last week was support for new industries like aquaculture - which doesn’t use a lot of power - hydrogen, the Government’s default answer to all things energy related - and data centres, which employ very few people.

Interestingly, two data centres will open in Auckland in 2022. Their combined load will be just 20MW.

EV enthusiast and ChargeSmart chief executive Nigel Broomhall is right to tout Tiwai Point as a potential location for a global scale EV battery ‘‘Gigafactory’’, but really those talks should have begun two years ago.

The harsh lesson from the smelter’s experience with renewably produced aluminium is that, while some consumer goods can already attract a premium based on their sustainability and a low-carbon footprint, many will not and few if any commodity products will. The latter must still compete on cost.

As a nation we have tried to move out of the commodity game and in the past 20 years we have developed global technology plays in everything from film-making to healthcare and space flight.

We have had some success encouraging more high-tech manufacturing - but done little to really drive it - and during the pandemic we casually shut it all down as non-essential to the economy.

At the same time we have allowed other heavy industry, like wood processing and steel making, to atrophy, despite our ongoing domestic demand for those products and the high-paying jobs and skills training they provide.

Even in areas like geothermal and wind energy - where we had a global edge over many players - we have sat back and let others muscle in or overtake us in fields which are no longer niche.

We showed no enthusiasm when the UK government wanted to partner in a marine energy test centre here; officials were disdainful of efforts to offer internationally our then-unique skills in integrating renewables into fledgling electricity grids; and Iceland is now offering geothermal development advice in our Asia-Pacific backyard.

In a world that is crying out for natural gas - to replace high-emitting coal - we have opted to halt offshore exploration.

Talk about the potential to develop ‘‘green-tech’’ minerals like lithium and cobalt has not been matched by action.

And while we advance modest hydrogen trials here, state and federal agencies in near-neighbour Australia have committed about $A400 million ($NZ427 million) to date; Germany has earmarked €9 billion ($NZ15.7 billion) for hydrogen as part of its Covid-recovery plan, in addition to other European Union funding.

As Andrew Clennett, chief executive of local hydrogen developer Hiringa Energy said last month, ‘‘other countries have stopped talking about it and are doing it’’.

Governments can’t magic up businesses and industries. But they can easily stop them, sometimes gradually and unwittingly.

If renewable energy is such a compelling attraction, where are these businesses?

If it is that easy, why is China’s Guangxi Fenglin Wood Industry Group now in its third attempt in six years to get investment going here?

Is the renewable energy bounty a myth of our own making? Or is it that no large-scale manufacturer would want to establish a business in a country where governments have proven fickle supporters and where it could take five years for a resource consent?

And if that manufacturer is an energy-intensive exporter, how comfortable would it be after Finance Minister Grant Robertson last week casually dismissed as ‘‘subsidies’’ the necessary protections available for exporters under our emissions trading scheme?

Former smelter general manager Tom Campbell is right to be angry about the lack of commercial common sense the parties in the smelter dispute have shown.

Rio Tinto’s reckless demand for a $30 million Crown pay-out in 2013 - to ease the path for the listing of Meridian Energy - poisoned an already difficult relationship. Government-owned Transpower has shown remarkable intransigence in refusing to cap the smelter’s rising and obviously unfair transmission obligations.

Perhaps while half the Cabinet is in the Deep South offering soothing words, someone at Treasury could give Rio Tinto a ring and find out what the timeframes are for dismantling the smelter.

And maybe someone could give some thought as to how one of the country’s largest consented industrial sites could remain just that, before Transpower starts ripping down its lines, before the port infrastructure is dismantled, and before the Department of Conservation tries to add it to its already generous South Island estate.

Completely agree. Successive governments have dropped the ball in Southland. If Tiwai Point was anywhere near Auckland, there would be a plan in place and things would already be rolling - but because it is in Southland the smelter will be long gone before anything is done, if ever. Even if a plan emerges, the Resource Management Act will ensure that nothing happens for years and all the plant and infastructure at Tiwai will either be removed or will be in such a condition it will be useless.

Excellent article outlining the succession of our politicians' failures to look beyond the end of their pinocchio(esq) noses.

This represents an opportunity to walk the walk regarding our future energy needs and environmental credibility - neither of which have been forward thinking in New Zealand to date. My bet is our governments continue to talk the talk, and nothing changes as this site is vacated.