'Rivers of gold' for Aust's Budget 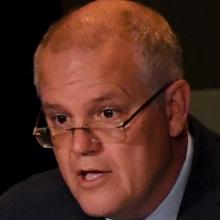 A stronger economy, higher commodity prices and record employment growth have delivered a $A9billion ($NZ9.65billion) to $A10billion ($NZ10.72billion) improvement in the Budget in annual running terms since the mid-year fiscal update.

One economic correspondent has described the extra cash as ``rivers of gold'' for the Malcolm Turnbull-led Government as it delivers its last Budget before the next election, which is due before May 18 next year.

``The rivers of gold are running again, with the global and Australian economies doing the Budget plenty of favours,'' Deloitte Access Economics said.

``It's an almost picture perfect backdrop for the taxman. Not only are there more dollars in the economy than Treasury forecast, but companies and super funds have also increasingly run out of the losses they racked up during the GFC - meaning that good news on the economy is being turbocharged in terms of its effects on the tax take.''

National Australia Bank economists said their analysis indicated favourable effects for an improving economy, which could have meant a return to surplus as early as 2019-20.

However, Treasurer Scott Morrison had stated the Budget would return to surplus in 2020-21, as previously planned.

``Rather than bringing forward the return to surplus, the improvement in the Budget's bottom line has given the Government room for [cutting] income tax and to further increase infrastructure spending, a choice receiving some criticism.''

The political reality was the Budget tonight was an election Budget, NAB said.

Income tax cuts, aimed at low and middle-income earners, and infrastructure spending were also likely to have positive impacts on the economy.

Markets would be interested in the Treasury's forecasts for economic growth as measured by GDP.

The Reserve Bank of Australia's May Statement of Monetary Policy foreshadowed growth of slightly more than 3% this year and next year - numbers likely to be included in the Budget figuring, NAB said.

``It will be interesting to see if out-year forecasts are again trimmed as was the case last year. It's likely as, for wages to date, wages growth remains stuck at about 2%, despite the first glimmers of some lift.''

Politically, the Government was setting up a choice for voters between its ``lower income and company tax'' policy platform and the Opposition's ``redistributive tax and better budget improvement'' platform.

The Australian Labor Party opposed company tax cuts for companies above $A50million a year turnover, and proposed increasing taxes on the wealthy to fund larger tax cuts for low and middle-income earners.

In recent years, the bond market had not reacted noticeably to the release of the Budget, and NAB expected a similar outcome this year.

The bank's expectation for an improvement in the deficit profile should flow through to a lower outlook for debt and the issuing of bonds.

The New Zealand Budget will be released on May 17.