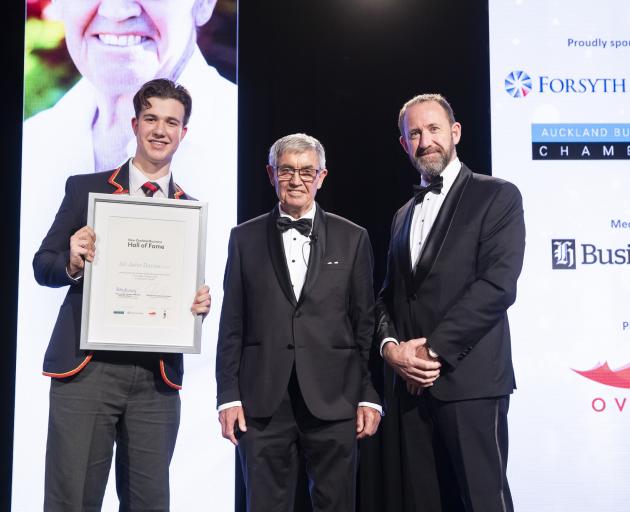 Sir John Davies (centre) at his induction in Auckland last night into the New Zealand Business Hall of Fame with Andrew Little (right) and escorted by high school pupil Bruno Marsh (left) acting as his chaperone for the evening. PHOTO: GINO DEMEER
A simple business philosophy and looking after his employees have taken Sir John Davies a long way in the past 50 years.

The achievements of the tourism magnate and former mayor of Queenstown were recognised at a gala dinner in Auckland last night when he was inducted into the New Zealand Business Hall of Fame.

Born in Wellington 78 years ago, but raised in Dunedin, Sir John is the owner of family firm Trojan Holdings, which has major interests in skiing and other tourism-related ventures in the South Island.

Sir John, who came to Queenstown with his wife, Trish, Lady Davies, in the early 1960s, said he viewed the accolade as a "reflection of what we've done with the company".

"I came to Queenstown with virtually no money - as a musterer - and steadily invested."

His philosophy in business was "getting the product right".

"It's about caring for the product and caring about staff."

He put himself in the customer's shoes to understand what they wanted, and took the same approach with the people he negotiated deals with.

These days, he employed "very good" managers to run his company's operations, and focused his time on major capital projects and the things that particularly interested him.

"I choose what I want to get involved with - there's not nearly the pressure that there used to be.

"You can't run it all yourself, and as we've grown, I've had to tell our managers they've got to grow with it, get good people around you and delegate."

Three years after moving to Queenstown, he and Lady Davies realised they could not afford a farm of their own, and a casual conversation on a cricket pitch led to him buying into his first business, a 40% stake in Wakatipu Transport.

The small company grew over 30 years into Northern Southland Transport, which had almost 250 vehicles on the road at its height.

In 1975 he became involved in local body politics, and between then and 1989 served as a councillor for 10 years and mayor for six years.

He bought the Routeburn Guided Walk in 1990, followed by the Milford Guided Walk and the Hermitage Hotel at Mt Cook.

In 2002, he and fellow entrepreneurs and ski staff banded together to buy Coronet Peak, The Remarkables and Mt Hutt ski areas from Air New Zealand.

Sir John said Lady Davies had played a major role in the company's success, particularly in the earlier stages of its transport, accommodation and property operations.

"She's been involved over the years enormously. She's stepped back now, but she's been a great help."

Sir John was made a Knight Companion of the New Zealand Order of Merit for services to business and tourism in 2013.

His other accolades include a Queenstown Chamber of Commerce Lifetime Achievement Award in 2010, being appointed a Companion of the Queen's Service Order in 1995, and the Sir Jack Newman Outstanding Industry Leader Award for tourism.