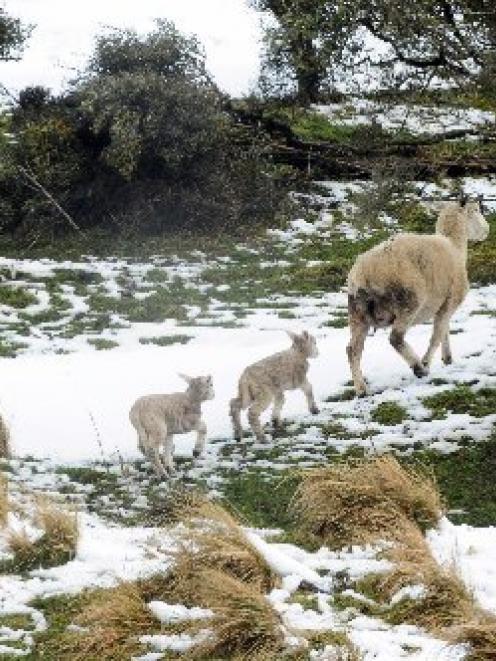 A ewe and her twin lambs seek shelter in the Owaka Valley during the September storms. Ultimate lamb losses from the storm are estimated at up to 1.5 million. Photo by Craig Baxter.
September's killer week of storms could cost the country's sheep and cattle farmers more than $100 million and wipe out up to 400 full-time seasonal jobs for southern meat workers.

There is a growing expectation as many as 1.5 million lambs have died and an unknown number of ewes, but whatever the number, there will be far-reaching repercussions for the southern economy.

The Ministry of Agriculture and Forestry is forecasting the average Southland sheep and beef farmer to make a $30,000-$40,000 loss this year as a direct result of the storm.

The secretary of the Otago Southland Meat Workers Union, Gary Davis, warns one of the industries hardest hit will be meat workers.

There are fears 300-400 seasonal jobs will disappear this summer, because the number of lambs that died in the South is equivalent to a season's production on one processing chain in a meat works.

Other workers could end up with much shorter seasons as work ran out earlier, he said.

"There is not enough stock to go around for everybody."

Falling sheep numbers were already having an effect, with staff who normally had jobs all year round being laid off for three months and seasonal workers having shorter seasons.

The season was also three to four weeks late, he said.

Alliance and Silver Fern Farms were still to open their large plants.

Up to three-quarters of lamb deaths in the September storms occurred in Southland and South Otago, where tailing counts have revealed some farmers lost half their lambs, but the loss of 30% of lambs was common.

A more accurate figure on the extent of lamb deaths is expected when Beef and Lamb New Zealand complete tailing statistics later this month.

"The million figure will be there," he said of national losses.

While some farmers in the worst hit areas of coastal Southland and South Otago have lost half their lambs and an unknown number of ewes, Mr Rose knows of one farmer who has lost 1000 ewes worth more than $100 each.

"It is an horrendous lambing percentage, through no fault of their own, but from the worst storm in 61 years," he said.

One Otago farmer lost 1500 lambs, worth $120,000 in lost income, and in another case a farmer has a third fewer lambs to sell to meat companies.

Mr Rose said many farmers hoped they had escaped the week-long storm largely unscathed, only to find their lamb drop was back 20% on expectations.

BNZ economist Doug Steel said the economic effect from the stock losses would be significant for the Southern economy, as farmers would have less money to spend, transport companies less stock to move and meat workers a shorter season.

"It's certainly going to be a big whack for the economy, but in Southland and South Otago in particular."

The devastation to the lamb flock comes at a time when it was already shrinking because of land-use change.

This year's expected lamb drop of about 27 million was already well back on last year's figure of 28.3 million.

Allowing for retention of replacement ewe lambs, this year's lamb kill was expected to be 21.4 million, about the same as last year, but well back on the 25.4 million killed in 2005-06.

Fifty-one million were ewes. They gave birth to 50 million lambs.