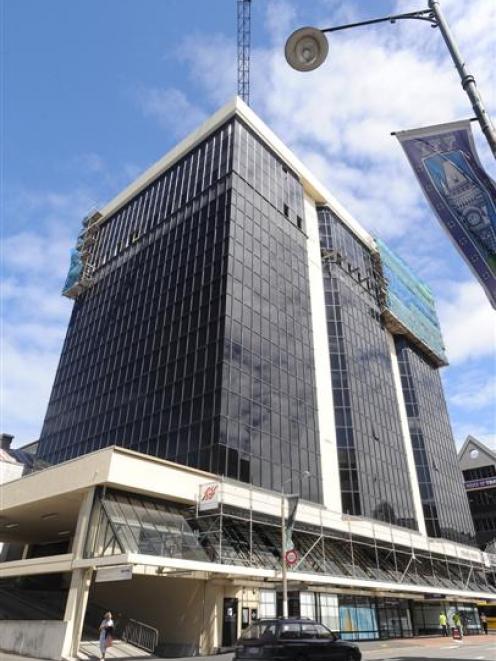 After a year, scaffolding is coming off Otago House after a three-storey extension was added. View from Dowling St. Photo by Peter McIntosh.
The year-long $7 million construction of three new floors on Otago House in Princes St is near completion, with scaffolding coming off the now 13-storey building and internal fit-outs about to start.

Lynne Ray, manager of NZ Moray Property Ltd, which owns the building, said, when contacted, yesterday that depending on the weather, scaffolding would be removed within about three weeks and some final work, including the capping of mullions (vertical window divides) and installing of more windows, would be completed in coming weeks.

The project has so far gone to schedule and now a new floor was being built on the 11th storey, which used to be the rooftop.

External construction was due to be completed by the end of March, by which time internal fit-outs would be under way, but a final completion date had not been set, Ms Ray said.

The three storeys, which total about 3000sq m of space, would be occupied by existing tenants, leaving about two floors available for new tenants.

Ms Ray said there had been some interest in the space.