Microsoft focuses on tablets in bid to catch up to Apple 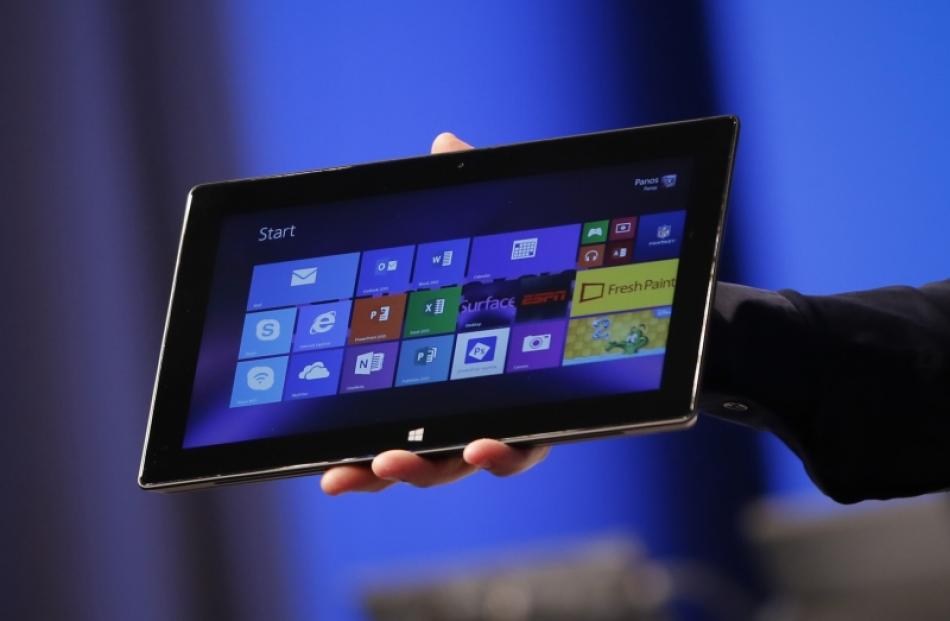 Microsoft had a rough go with the first generation of its Surface tablets, but the company hasn't let those early struggles deter its mission to compete in the tablet market.

The first Surface tablets - the RT and Pro - were slow to sell, so much so that Microsoft took a $US900 million charge over the summer because of unsold inventory. Later, the company also cut the prices of both products.

The Surface was supposed to be Microsoft's answer to Apple's iPad, but despite ads that showed off some of the Surface's superior features, Apple still has a dominant grip on the tablet market.

But Panos Panay, corporate vice president of Microsoft and the creator of the Surface tablet, said the company is staying the course.

He said he believes customers who want to use their tablets to get work done will see the benefits of the Surface.

"If the team stays focused and the people believe in what they're building, I think you're going to see that in the products," Panay told the Los Angeles Times during an interview at the Microsoft Store at the Westfield Century City mall in Los Angeles.

"It comes down to this: If you're making great products, people will buy them."

Panay said it was important for Microsoft to stick to its brand and focus on users who "want to be able to get more done."

"If that's not your primary goal and it's about watching movies or playing games and only that, that's a great thing. And people can select the best device for that," Panay said. "But if your goal is to get more done, and we stuck with that, the promise of this product brings that truth to life."

Microsoft will release the second generation of the tablets - the Surface 2 and Surface 2 Pro - on October 22, and they are already available for pre-order online. They are faster, thinner and lighter than their predecessors, and Microsoft has also improved them in other areas.

Panay said the upcoming gadgets feature higher-resolution screens, and their glare has been reduced to some of the lowest levels in the industry, according to Microsoft.

Additionally, the Surface's new kickstand has a second viewing angle that Panay said makes the tablet easier to set on one's lap and more comfortable for tall people to use. There is now a silver color option for the tablet as well as the original black.

But perhaps more important, Microsoft has beefed up the battery life on its tablet, addressing the chief complaint about the first generation of the Surface.

Microsoft did not say how long the battery lasts on the Surface 2 Pro.

"Both products had a significant focus in making sure if people were going to be productive, we needed more battery life in both products," Panay said.

He said Microsoft also has improved the pricing for the Surface.

For starters, Microsoft will continue to sell last year's Surface RT for $US349, giving first-time customers a lower-cost option. Second, Microsoft is selling the Surface 2 for $US449, which is $US50 less than what its predecessor debuted for last year.

Microsoft is also including its suite of Office programs with the purchase of the Surface 2.

And finally, Microsoft is also giving 200 gigabytes of cloud storage through SkyDrive for two years to users who buy a Surface 2 or Surface 2 Pro. Those customers will also get free Skype calling to land lines in 60 countries and access to Skype Wi-Fi spots around the world for one year.

The first generation of the Surface was about showcasing the touch-focused Windows 8 operating system, Panay said. The second generation is about bringing every part of Microsoft together on one device and supporting professional users.

"It's all of those software properties coming together and making sure the hardware is thinking about each one of those pieces so they can all come to life together," Panay said.

The Surface creator also said his team has more momentum than ever, thanks in large part to a boost in sales spurred by the Surface's late-summer price cut.

Panay said he and his team were excited about what is still to come for the Surface, and that's because of the potential in the tablet's click-in touch covers.

Previously, the touch covers, which are flat and double as a Surface screen cover, had 80 sensors to detect users' typing. The new touch covers have more than 1000 sensors and can detect typing more accurately.

They can also be used to perform gestures, and Microsoft is working for ways to have all sorts of touch covers, not just those that are laid out like a keyboard.

Microsoft's first stab at this came during the unveiling of the new tablets. There, the company showcased a touch cover that looks like a DJ controller. With that cover, the Surface could be used to create music.

The DJ tool is one example of the types of touch covers Microsoft could make.

"That's what's cool about it," said Stevie Bathiche, research manager in Microsoft's Applied Sciences Group, who accompanied Panay. "It becomes a platform for the future."