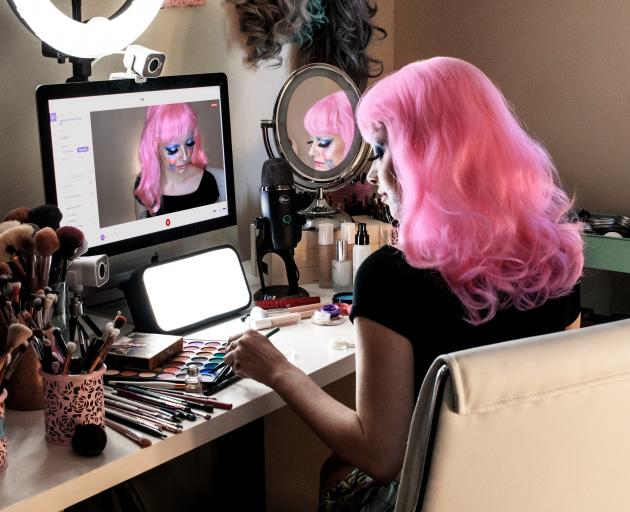 The Blue Yeti mic and Logitech Streamcam both provide capability across streaming and other uses. PHOTOS: SUPPLIED
The tech that keeps us in touch, visible and audible, has only become more important. Michael Robertson reviews a couple of new releases from Logitech.

Whether you’re trying to be heard better in a high intensity game, want to be clear and audible for streaming or podcasts, or just want to stop hearing "Can you say that again?" in your conference calls, a good microphone is essential. While microphones are usually included in devices, I don’t think anything can beat a fully featured standalone mic for sheer quality.

One of the most recognisable names in USB microphones, the Blue Yeti lives up to its reputation as a solid, easy to use, and reliable microphone. It’s been out for more than a decade and is still going strong.

The microphone looks great, especially in the sleek black and silver of the "Blackout" variant. It comes attached to a stand, but you can remove it to attach it to a mic arm if you wish. There’s a physical mute button (love this), as well as a gain knob, and a 3.5mm jack for listening to your recordings as they happen.

It doesn’t count for a microphone to just look great, so the Blue Yeti of course sounds great as well. Everyone that heard me noticed that I sounded much better and clearer than before. While you do have to lean closer to the microphone for that quality, it sounds perfectly fine from a distance.

It’s really just as simple as plugging the USB into your computer, setting your polar pattern and speaking into the side of the microphone. No fancy software is required, though you may want to invest in a pop filter to reduce the "p" pop sound from the recording.

While it can be outclassed by more specialised microphones, the versatility and adaptability of the Blue Yeti cannot be denied. Whether it’s streaming, conference calls, musical recording, or interviews, the Blue Yeti can do it all, easy on the wallet and sound like a charm doing it. — Rating: 5/5

Having a good webcam is such a boost in this age of conference calls and working from home. Last time I had to work from home, I had to prop up a cellphone so others could see me. Sorry to all my co-workers who saw up my nose and for all the times it slipped over with a loud bang. If you want to upgrade from your phone propped on a couple of books, the StreamCam, while built with streamers in mind, is great for anyone using it.

The camera supports up to 1080p at 60fps, and the picture quality is extremely good. The colours are great and it’s a sharp, clear image. It’s not as good in low light conditions so open some curtains or flick on some lights.

While you can just plug it in and use your operating system’s camera software, it’s not recommended, as you cannot change the settings without installing some specific software. Using the Logitech Capture software, you can adjust various settings of the webcam, such as frame rate, resolution, focus and exposure. You can also add effects to the webcam and text overlays, have automatic face tracking, and even include an anti-flicker feature, reducing the flicker from lights.

The camera also includes an inbuilt microphone that sounds very good, though has a rather noticeable echo the further you are from it.

The camera works seamlessly with OBS, a free and widely used streaming software that can take images before or after they’ve been through Logitech Capture. The StreamCam also comes with a three-month subscription to XSplit, which also works seamlessly.

The camera comes with a monitor mount for perching on top of a monitor and a tripod mount. I did find the monitor mount was a bit too thick for my thinner bezeled monitor and covered a bit of the screen to have a secure fit. It’s a shame there is no way to cover the lens physically, like a slider, for privacy reasons. While there is an LED to let you know when it’s recording, I would have liked the option.

The StreamCam is a great little package, top to bottom. Despite its name, the StreamCam is for everyone who needs a good webcam for any purpose. While you do have to install some software to take advantage of its greater feature set, the software itself is intuitive and easy to use. While not as cheap as other webcams, if you’re willing to pay a little extra, you’ll find a lot to love about it. — Rating: 4/5