Ticket-holders unlikely to get refunds from failed Dunedin company 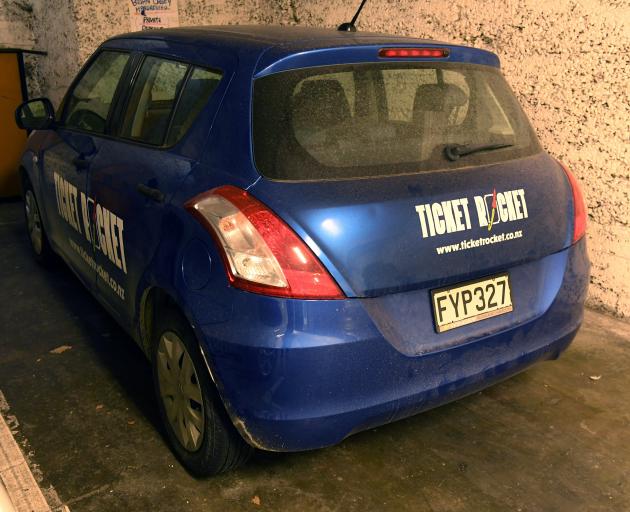 A branded Ticket Rocket car left in a central Dunedin car park. Photo: Stephen Jaquiery
Ticket-holders could be at the back of a long line of those owed money by Ticket Rocket - and probably out of luck, a consumer watchdog says.

"Ticket-holders come last in potentially a long list of other creditors, which is unfortunate for people who just wanted to go to a rugby game.

"Unfortunately, Covid has shaken a lot of industries around the country and events have been particularly hard-hit."

If the receivers could keep the company going to pay back creditors, the company could in theory survive.

Typically, it would be wound up and its assets, once sold, would be divided among the liquidator, secured creditors, preferential creditors such as employees and finally unsecured creditors - such as people who had paid for tickets for events.

"Unfortunately in these types of situations, the majority of customers will be unsecured creditors and they will come last on the list," Mr Duffy said.

Attempts by the Otago Daily Times to find out how much money the company owed were unsuccessful this week.

The receivers did not reply to requests for information nor to outline how many secured creditors there were.

The company had sold Super Rugby tickets for at least four of the five New Zealand franchises but those agreements came to an end earlier this year.

It was reported in June that the Hurricanes franchise was calling in the police as it tried to recover $200,000 from Ticket Rocket.

Affected parties "up and down the country" were experiencing the same issue, Regent Theatre director Sarah Anderson said.

The theatre had been aware of how the matter was progressing for some time and she understood liquidation applications were in place as well.

"The theatre, like a lot of people who have bought tickets, is still awaiting funds that were meant to be held in trust by the company - and we are pursuing all our legal options to be able to retrieve it like everybody else."

She declined to say how much the theatre was owed.

"We are just, as you can imagine, working on our best course of action with them - we will be just another creditor on their list," Mrs McElhinney said.

"It’s so hard for everyone, because we are the agent; we’re the people in the middle."

A car in a car park in the Dunedin city centre, covered in Ticket Rocket branding, is also covered in cobwebs and appears to be abandoned.

Branding on the former Ticket Rocket office in the building above it has been removed.