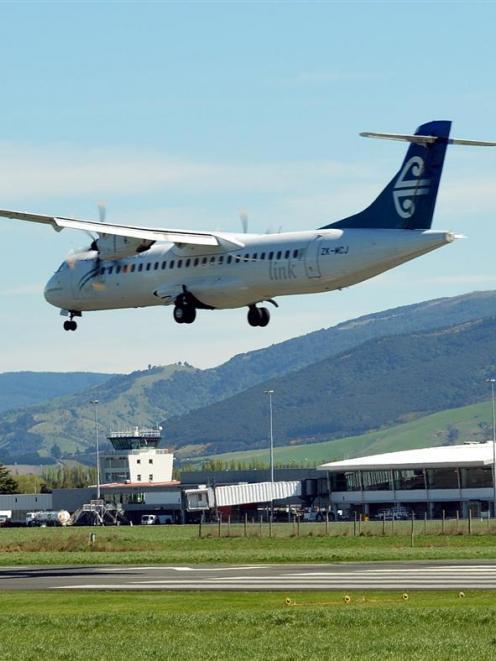 Dunedin Airport management says it has no plans to extend its runway, despite major entertainers booked at the Forsyth Barr Stadium having to truck their gear from Christchurch.

However, it said the runway could be extended in future if daily demand, rather than occasional demand, made it worthwhile.

For the recent Pink concert in Dunedin, the two 747s and one 767 needed to carry the almost 70 tonnes of set equipment were too big for Dunedin Airport.

The set had to be flown to Christchurch, loaded on to trucks, and freighted by road.

A flight south for passengers to view the Aurora Australis this year had to take off from Christchurch, as Air New Zealand had retired its last Boeing 767, the only long-haul plane that could land and take off from Dunedin's shorter runway.

Asked about the future of the runway, business development general manager Megan Crawford​ said the airport was not considering extending it for larger aircraft.

"There is no airline asking us to consider this.

"Airports do not build runways thinking planes will come.

"Instead airports are an important part of an integrated visitor economy which promotes a destination that drives demand."

Capacity was offered by planes that best supported the yields sought by airlines.

The airport had a transtasman flight from Brisbane and had achieved an overall 20% lift in passenger numbers over the past three years.

However, she said the situation could change in future "should the market change".

"We are not constrained by land as Queenstown and Wellington airports are.

"But demand has to exist, not just occasional demand but daily demand in planes both arriving and leaving our city."

Sometimes thinking ahead can be challenging, in particular when it comes to extending the Dunedin runway for bigger planes as mentioned in your article.
Just a couple of facts perhaps to persuade Ms Crawford to think again.
- Dunedin Forsyth Stadium is ranked 13 in the world venue list for concerts, I would like to think we keep it that way but without a proper runway and knowing that other cities don't sleep, we might well end up on number 21 in 5 years time.
- Cost and extra risk factors to truck equipment from Chch to Dunedin.
- What is Ms Crawford 5 year or even 10 year plan with our airport?
- Has she studied the statistics of growth, expansion and restrictions?
If it was up to me, I would make Dunedin airport ready for bigger planes.

Thanks for enquiring about this, David.

It's still a shame, as pretty sure a few years and CEO's ago there were plans to extend the runway, but not sure why they were scrapped/put on hold.

It's also a shame for plane spotters, as the ones that land here are barely noteworthy because they're so small.

Looks like the White Elephant will loose virtually ALL concerts once Christchurch's new stadium is built. After that, there will only be the odd international rugby game to draw crowds. So it appears that the $15m p.a. approx in interest cost we pay on the debt for the white elephant will never be paid off from operations (not that it ever was in the first place). Financial accountability anyone?

I hope the DCC will wake up to reality and starts promoting Dunedin as a destination for Australians from Melbourne/Sydney and Brisbane via arrangements with the airlines for direct flights. Otherwise we will always be the crumbs destination after Queenstown & Christchurch. We have plenty of things going for us- but ask any Australian- hardly anyone knows of Dunedin.

What is actually the problem with extending the runway then? Once it's done it's done, it can only be beneficial. "But demand has to exist, not just occasional demand but daily demand in planes both arriving and leaving our city." This is the attitude that is holding our city back. Of course they won't come if the runway stays as is...

"Airports do not build runways thinking planes will come" Seriously? They do. Christchurch airport development made it a hub, not the opposite. Air carriers and entrepreneurs will only consider Dunedin if they will see a suitable facility. Will you prefer shopping in the diary shop hoping it will evolve to large store, or go to supermarket instead?

"if you build it they will come." Gandhi

They should lobby the Gov for the funding regardless. Better to beg now than have to grovel later.