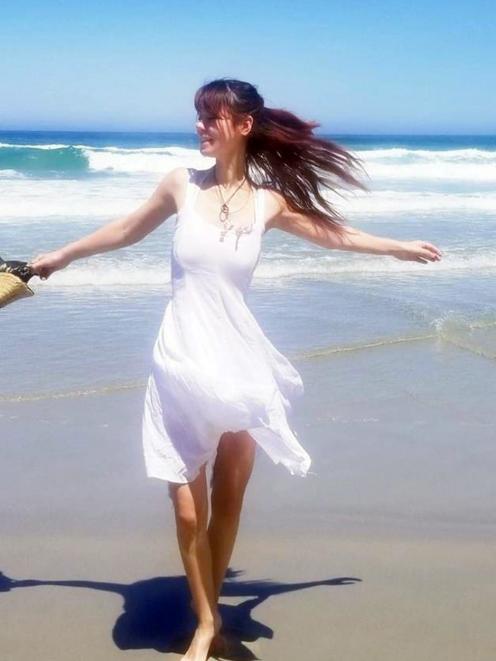 Renee Whitehouse, who suffered head injuries after being hit by a truck while riding a Lime scooter, pictured in happier times at the beach. PHOTO: SUPPLIED
The family of a 26-year-old Californian woman in intensive care in Dunedin Hospital is urging Lime to provide helmets with its e-scooters.

Renee Whitehouse was hit by a truck while riding a scooter home from work at an Octagon bar at 1.45am on Friday.

The University of Otago student was not wearing a helmet and remains in intensive care.

She has serious head injuries and is in a stable condition.

A friend, speaking for the family, said Ms Whitehouse's mother and sister arrived from Alaska on Sunday.

They were private people, but were speaking out because they wanted people to know how important it was to wear helmets while riding the scooters, the spokesman, who did not want to be named, said.

"She would have been a lot less hurt.''

Ms Whitehouse would "definitely not'' have been drinking before the crash, as she was working.

He also doubted she was listening to music, as she did not usually do that when she walked, he said.

The Otago Daily Times has been told Ms Whitehouse rode through a red light at the intersection and into the path of the truck.

That has not been confirmed by police.

The spokesman said the investigation was ongoing, but said police and the family believed Ms Whitehouse would have been very tired, after a 14-hour or 16-hour day, working on her thesis and then bartending, when the crash happened.

She had been in New Zealand for a year, studying for a master's degree in marine archaeology.

The family believed the truck driver was "as much of a victim in this as anyone else'', the spokesman said.

He said Ms Whitehouse's mother found it "fairly ridiculous'' cyclists had to use helmets while Lime scooter users in New Zealand did not.

"It wouldn't be difficult for them to stick a helmet on every Lime,'' he said.

"I'm not wanting to [single] them out as a danger but they are the only ones you don't have to wear a helmet for.

"The hard part about it isn't that someone so wonderful and bright is now in such a serious condition - it's just how preventable it was.''

A helmet is not legally required to be worn when using an e-scooter, but is recommended by the NZ Transport Agency.

E-scooters are classified as a low-powered vehicle.

In Brisbane, where it is illegal to ride an electric scooter without a helmet, Lime has been providing helmets.

This week, the Brisbane Times reported on issues with Lime's helmet supply.

The company did not respond by last night to a question from the ODT about how it could ensure each of its scooters had an accompanying helmet.

The Whitehouse family spokesman said if Lime did not want to provide helmets, he thought the council should try to create a bylaw.

A Dunedin City Council spokeswoman said that was beyond the council's power.

"The DCC has no authority to regulate e-scooters, including making helmets compulsory.''

"This and all other regulatory issues associated with the scooters are a matter for [NZTA] and/or the Ministry of Transport.''

Work is under way on law changes that will impose a 10kmh speed limit for Lime e-scooters being ridden on the footpath, and the Government is set to consult on the new rules early this year.

Transport Minister Phil Twyford has said he was not considering a law change to make helmets mandatory when riding the scooters.

The family spokesman described Ms Whitehouse as "full of energy and excitement'', a "really kind and generous'' woman who was involved in acting, singing and dancing.

''She is extremely intelligent. She is one of those people [who] you have no idea how they do so much.''

He met her through a gaming group, and on the night of the crash offered to drive her home from her job, but she was the kind of person who did not want to inconvenience other people, he said.

Ms Whitehouse's family asked that people did not attempt to visit her in hospital, but instead leave messages on her Facebook page.

Lime should provide helmets? What happened to any semblance of personal responsibility?

Oh, belt up, Coker. You drag ideology into a tragedy.

It's SH1, the one way for heavy vehicles at night, enabling speed by light phasing.

42 pedestrians were killed on NZ roads last year. Where is the call for all pedestrians to wear helmets when walking on or beside roads?

I may be wrong here but didn't I read that part of the MOU with the council was that the scooters would be removed at nights?

So she runs a red light and its Lime's fault. I can imagine supplying helmets would be a logistical nightmare, and would not be needed if people just used common sense and the products responsibly. This is why we cant have nice things.

With this young woman fighting for her life and distressed family at her side this is not the time to go on about personal responsibility etc. Perhaps one should ask what to what extent has the roading authority, traffic control and the council given any thought to consequences of suddenly introducing a new way of going fast on wheels, given that bigger and heavier vehicles are using the road and slower perdistrians the footpath? We are now trying to sort this out, yet other places with real experience are ignored. Why so slow here to learn?

This from ODT 11th January re the DCC/ Lime memorandum.

The memorandum set out a series of obligations and responsibilities for Lime and its "agents", including that:

- E-scooters are removed from public places every evening of operation

That's the second time I've read in the past week that Lime won't respond to requests for comment. And yet, they had plenty to say when promoting their arrival in Dunedin. Funny how quiet they are now that people are getting seriously hurt. I'd also like to know if it's true that Lime doesn't pay GST? If that is true, the question could be asked - why should the taxpayer foot the bill for all the people going to A&E with injuries (5 to 7 a day in Dunedin) and the weeks of critical care the young woman in this story will be receiving? Oh and the cost of ACC payouts and police/emergency services attending serious accidents involving one of Lime's customers. Would be interesting to hear Lime's point of view on that.

The difference between lime scooters and bicycles are that there is about 340 degrees of escape access from scooters but a cyclist is obstructed by the frame of the bike for most of the circumference around the cycle.