A runaway-truck ramp, traffic lights or an underpass are among options mooted for a notorious Dunedin intersection.

The junction of Great King St and State Highway 1 (Pine Hill Rd) has been the scene of at least 87 crashes since 2000, injuring nearly 70 people, five seriously.

NZ Transport Agency system manager Graeme Hall, of Dunedin, acknowledged a slew of safety concerns at the intersection, the site of two collisions this month alone.

The issues were related to its geography and the fact the city road crossing the highway was controlled with a stop sign, he said.

''It has restricted visibility due to the approach angles and [the] curve of SH1 ... some drivers fail to give way or stop to ensure the intersection is clear before proceeding, and the large volumes of traffic result in conflicting movements between vehicles, pedestrians and cyclists.''

Some drivers avoided the intersection by ''rat running'' via nearby streets instead, while traffic was known to stack up during peak time at the stop sign, Mr Hall said.

In 2017, after its brakes failed, a truck-and-trailer unit went out of control in Pine Hill Rd as it travelled downhill, rolled on to its side and slid to a halt at the intersection.

An investigation by the police commercial vehicle safety team found the accident was caused by the brakes on the trailer not working correctly because of a mechanical fault.

Mr Hall said the intersection had been the subject of several investigations, but it had not had sufficient priority to be included in the intersections eligible for upgrades through the National Land Transport Programme.

However, the intersection was within the scope of the Connecting Dunedin transport partnership between the Dunedin City Council, NZTA and Otago Regional Council, and would be considered as part of a business case currently being completed.

Mr Hall said the agency had considered a range of options for improving safety at the intersection, including:

All those options would be considered as part of the business case and would be subject to a cost estimate, before any decision on funding, Mr Hall said. 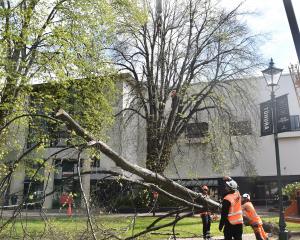 It's not a problem if people actually stopped at the stop sign, no half heartedly stopped, rolling stop or cursory glance up the hill.
No amount of remedial work will stop people from not driving to the road rules.

How about actual enforcement of the existing stop sign at the intersection? When I am driving in that area (rarely) I see perhaps 1 in 10 drivers who actually come to a complete stop. The visibility from the stop line is quite adequate for a 50 km/h zone...provided the stop sign is complied with.

It's no good saying that people should just drive better. Clearly that isn't going to happen. Let's not be high and mighty about this, because people, usually innocent, will continue to die and be seriously injured, and to allow this just to prove some smug, self-righteous point is unforgivable. Traffic, including cyclists, scooters, and pedestrians, is ever-increasing in this area, and this intersection is an arterial route both through the city and through densely populated North East Valley. It is long past time the intersection was upgraded to reflect this, and the specific dangers and difficulties it presents. No surprises that some pen pushing bureaucrat in Wellington doesn't think it's important, but the people of Dunedin should know better.

It's all very well saying there wouldn't be any accidents if people obeyed the rules. we all know that.
The reality is that there have been a lot of accidents here and in all likelihood nothing will change in this respect with the current road layout.

Do you really want to see the level of resources applied to this intersection to effectively police peoples behaviour? I don't - would be a waste of valuable resources.

You want accidents reduced ?(and I think we all do), then do something about the layout.
An underpass for traffic crossing SH1 at this intersection seems to me a very worthy solution. Can't have accidents if traffic isn't sharing the same space.

Even though there is nothing wrong with the Stop sign if people actually obeyed the road rules, i actually think one of two options needs to happen - since clearly so many are incapable of operating a motor vehicle well/safely enough.

1. Re-route Gardens/NEV bound traffic to George St. Either via a new road along the Leith (and perhaps traffic lights when it intersects with George St), or re-route that traffic to the Duke/George St lights.

2. Build a one way overbridge over the intersection, for south bound SH1 traffic. If you build a bridge over SH1 instead it would need to be high enough to cater for trucks carrying over height loads.
There is enough room for the former, especially on the exit of the bridge, but the entry (from coming down the hill) may be interesting with the close proximity of the SH1 north bound lane.