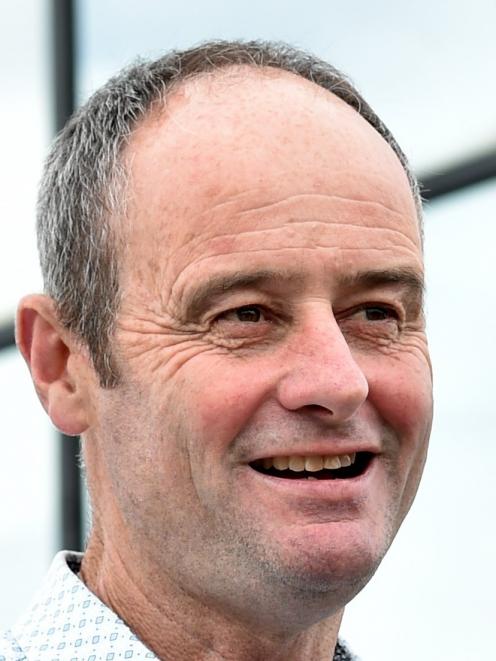 Jim O'Malley.
Two incumbent city councillors will go head-to-head - and more are expected to join them - in the race for Dunedin's mayoralty.

Jim O'Malley, a first-term councillor and key figure behind the "Own the Factory'' chocolate campaign, yesterday confirmed he would stand for both the mayoralty and a council seat at local body elections in October.

He planned to push to reinstate Dunedin's status as one of New Zealand's four major metropolitan centres, as well as taking steps to address transport, housing and climate change issues facing the city.

His announcement came just days after three-term mayor Dave Cull confirmed he would not seek a fourth term in October.

Cr O'Malley will join Cr Aaron Hawkins as the only incumbent DCC councillors to have confirmed bids for the mayoralty.

Crs Lee Vandervis, Christine Garey and Andrew Whiley - all potential challengers - are still keeping their cards close to their chests, as is Dunedin businessman Barry Timmings.

Cr Vandervis did not respond to requests for comment yesterday, while Cr Whiley said he was still on the fence about another mayoral bid.

Cr Garey said Mr Cull's decision to stand down was "significant'', and she was giving "considerable thought to how I might best serve our city'', but was not yet ready to confirm her plans.

Mr Timmings, who challenged Mr Cull unsuccessfully at the 2016 election, said he expected to have "something significant to say'' within weeks.

South Dunedin Labour MP Clare Curran - suggested by some as a potential mayoral candidate in 2016 and again in recent days - said when contacted she ``categorically ruled out'' having any plan to run.

That left Crs O'Malley and Hawkins, as well as Scout Barbour-Evans and Carmen Houlahan - both candidates from outside council - as the only confirmed contenders for Dunedin's mayoralty.

Cr O'Malley said yesterday Mr Cull's decision to stand down opened the door to fresh thinking and ``new blood'' around the council table.

"I think the people that have been there for a while have done a good job, but I am ambitious for bringing in new directions in the council, and you need the space to do that.''

Cr O'Malley wanted to see improvements in process to avoid a "two-tier'' council that excluded some councillors from positions of responsibility, fuelling frustrations around the table.

The council also needed to do more to address the city's looming housing crisis, and the development of "downtown'' apartment blocks - between George St and the one-way highways - was an approach Cr O'Malley favoured.

He also wanted to continue lobbying government on transport issues, including the return of commuter rail, as part of a wider push to reinstate Dunedin's status as one of the four major centres.

My comments on Mayoral candidate, Jim O'Malley's policies.
1) transport, - THIS IS A REGIONAL COUNCIL RESPONSIBILITY
2) housing, the city's looming housing crisis - THIS IS A CENTRAL GOVERNMENT RESPONSIBILITY
3) climate change issues facing the city. - THIS IS ANOTHER CENTRAL GOVERNMENT RESPONSIBILITY WITH A POLICY AND PROGRAM ALREADY IN PLACE
4) and the development of "downtown'' apartment blocks - between George St and the one-way highways - THIS WOULD HAVE TO BE A DEMOCRATICALLY ARRIVED AT DECISION UNDER THE DISTRICT PLAN AND THE RESOURCE MANAGEMENT ACT
5) 'continue lobbying government on transport issues, including the return of commuter rail, as part of a wider push to reinstate Dunedin's status as one of the four major centres' -THIS IS WHAT POLITICAL PARTIES AND THEIR MEMBERS DO, NOT LOCAL GOVERNMENT ELECTED REPS WHOSE RESPONSIBILITY IS TO RUN A CITY EFFICIENTLY AND COST EFFECTIVELY.

When campaigning during the last local body elections, Cr O'Malley said he would address the question of the new public hospital for the region. Again, not local.
People with such wide-sweeping ambitions should stand for Parliament, not local government. Can he comment?

Diane Yeldon wow awesome comments and appear 100% correct they all rest with others outside of the DCC
Often the current Mayor and Councillors appear to jump the line between Government issues and Council issues, I wonder if this is because they are aligned to parties? and trying to puff their chests up and say look at me look at me I'm all that and a bag of chips. I consider Hawkins a little green puppy with a bone reporting back to the Greens in Wellington waging his tail. I consider the Greens can't get into Government so they are changing NZ at the council level where they can and when we wake up NZ will be changed for ever.

Sure they need to raise the flag with Government when needed but not adopt Government issues.

My question is why would you try and condense Dunedin in to appartments when you have land to rezone and develop.

IMHO Jim O'Malley does appear to be the quiet person, I knew he was on council but hasn't been vocal in any issues as far as I know of.

How much time these councillors put into Dunedin and how much the put in to other jobs and businesses.

How may have conflict of interests