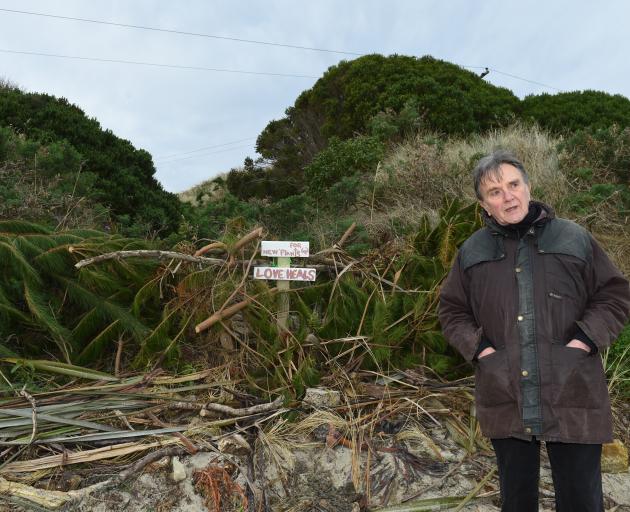 Aramoana Conservation Charitable Trust member Adrian Hall stands in front of piles of vegetation and plantings put in place by crib-owner Amrita Nectar (below). Photos: GREGOR RICHARDSON
An Aramoana crib-owner has taken the fight against erosion into his own hands, drawing the ire of a local trust but the qualified support of the Department of Conservation.

Amrita Nectar recently began piling branches and planting grasses and shrubs in and around several areas where large dunes had worn away near his crib, creating gaps between the two beaches on the sandy spit.

He said his efforts were an attempt to trap sand and create a consistent front to the dunes, behind which sand would pile to re-establish the dunes, thereby preventing high seas eventually breaching the spit.

That approach has the support of the Department of Conservation (Doc), which says the delicate and ecologically significant salt marshes on the Otago Harbour side of the spit could be seriously damaged if high seas breached the narrow finger of land.

Mr Curnow, the trust chairman, said the branches would obstruct the movements of wildlife, including sea lions and penguins.

"We believe the wildlife takes precedence over everything else." 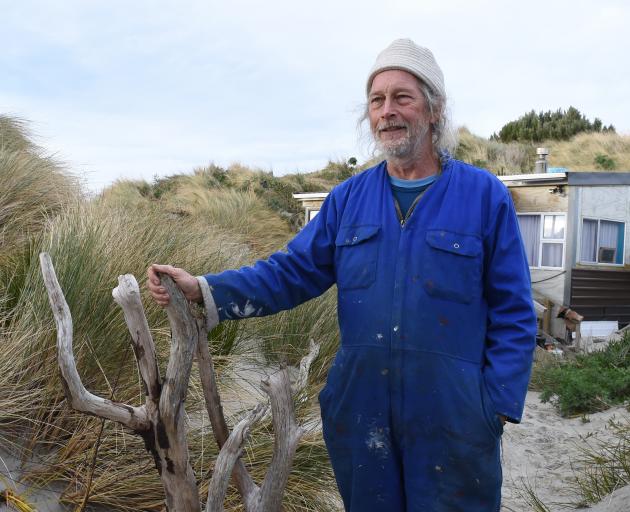 Amrita Nectar.
The trust disagreed the efforts of Mr Nectar would help sand build up and fortify the dunes, and Mr Curnow said he had not seen any evidence the approach would be effective.

Doc coastal Otago acting operations manager Mike Hopkins said he had consulted a marine-mammal specialist, who had no concerns about the work possibly obstructing the movements of sea lions.

Mr Nectar said he had recently seen the animals making their way across the spit without issue.

After the Trust raised concerns about Mr Nectar's efforts, including his signs attempting to limit public access to the areas around the dunes, Doc Dunedin supervisor Craig Wilson replied last month to say the signs were inappropriate and he had asked they be removed (they were painted over by last weekend).

However, Doc supported the piling of branches in an attempt to create a consistent dune-front to reduce the risk of high seas breaching the spit and damaging the salt marsh.

In another email sent yesterday in response to further concerns, Mr Wilson said Doc staff would visit the spit today to "identify any deviations from what has been authorised and seek remedies to them."

Doc had also authorised the use of a small digger to move sand near the crib in the dunes, on the proviso any damaged vegetation was replanted, Mr Wilson wrote.

Mr Nectar, who had owned the crib for 25 years and divided his time between there and his orchard, said he had planted about 3000 plants, trees, shrubs and grasses in four months of work to help secure the land in the face of increasingly high tides and strong winds.

"I've taken drastic measures to hold it in place ... Once the vegetation gets established, then you've got some holding power, otherwise it's just sand."

"We believe the wildlife takes precedence over everything else."
That has to be the dumbest statement I have ever heard in relation to ecology. You can have grass without sheep, but you can't have sheep without grass. In the flora and fauna debate, flora comes first, it came first in the evolutionary timeline, it comes first in farming, it comes first in every environment, from the oceans, to the mountains, from the deserts to the rain forests.
The Aramoana Conservation Charitable Trust seems to have an agenda, ODT should find out what it is.

The fact that Mr Nectar has been cutting branches and removing ngaio and pohutukawa and flaxes for his barriers from vegetation on the land of his neighbours had been made known to both DOC and the ODT yet unfortunately was not mentioned in the article.

Surely all native vegetation in an Ecological Area should have the highest level of protection and I believe this was one of the main concerns held by the Trust and a very valid one.
Janet

Mr Nectar had DOC approval to carry out the sand trapping activity and I know for a fact that he has not been cutting native vegetation for his sand dune restoration barriers. The vegetation you refer to, has kindly been donated from residents in Aramoana, Te Ngaru & Waipuna Bay in support of Mr Nectar's efforts to restore the sand dunes.

Access for sea mammals and development through informed planting,

Destruction of habitat, which has happened, is not helpful.

This should be seriously considered, even take some some priority.

The "Protection of the Salt Marsh"; which does exist after a fraught history,

is unlikely to happen by this dumping. That phrase being used by D.o.C. here,

is management-speak only, and obscures simple issues.

There is not - them against the other -

but a simple and logical premise that conservation means exactly that.

There is no suggestion, that neglectful and inconsistent management,

is symptomatic of D.o.C. Otago;

but that The Spit, Aramoana, needs continual scientific coddling.

Excessive use of those Spit houses, and irresponsible use by

This is the point of this complaint: ignored until publication became imminent.

So thank you ODT,

Mr Nectar, why stake your bundles of sticks & vegetation with free-loving hippie slogans - rather obnoxious do you not think?

Maybe "ill ride with the tide and go with the flow" is more appropriate.

Don't drink the Kool Aid dude - keep your machete away from the native veg.