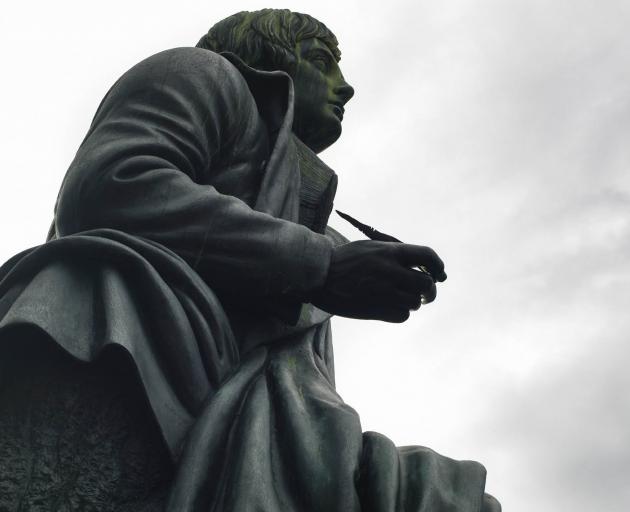 Protests about systemic racism around the world following the death of American man George Floyd have recently focused on statues and other public references to people with colonialist or racist backgrounds.

The Hamilton City Council yesterday removed a statue of colonialist Captain John Fane Charles Hamilton at the request of Waikato-Tainui.

But Te Runanga o Otakou kaumatua Edward Ellison said he saw no particular issue with any statues in Dunedin.

"Our focus is on developing our own narratives and seeing artworks that convey our stories, place names and associations, an area that has been neglected, we would suggest, for a long time.

"So while I welcome the discussion on the issue of racism and its negative legacy, how we might deal with the physical reminders, I am less focused on compared to seeing our stories being seen and told."

loves a casual walk to the octagon pic.twitter.com/jsG9kbI1n5

There is also a statue of poet Robbie Burns in the Octagon.

Critics of Burns have alleged he planned to make his fortune in the slave trade before his early death.

There have been calls in Edinburgh, Scotland, and Toronto, Canada, to rename streets named after Henry Dundas, 1st Vicount Melville.

In Edinburgh, a descendant of Lord Melville reportedly urged the city council to make changes to a statue, asking that a plaque explaining his ancestor’s racist history be put in place.

Lord Melville, a Scottish politician in the late 18th century, was known for delaying the abolition of slavery in the British Empire by 15 years.

There is a Dundas St in north Dunedin.

Dunedin City Council parks and recreation group manager Robert West said he was not aware of any complaints about statues in the city, and there were no plans to review them.

Mayor Aaron Hawkins said he wanted the issue to be iwi-led.

"It’s not for me to decide what is or isn’t harmful or hurtful," he said.

He also believed that there needed to be a "national conversation", rather than council making ad hoc decisions.

Toitu Otago Settlers Museum curator Sean Brosnahan said if statues were offered to the museum, they would be assessed like any other donation — "against our established collecting criteria and taking into consideration their historical significance, potential display and/or reference value, as well as ... how it would impact on our limited resources for ongoing care, etc".

"no plans to review or remove any."

I seem to remember a story that Robbie Burns got a young woman knocked up and refused to marry her. And then there's people that think his poetry atrocious. There's surely some reason some member of the ABSURD ANTI-FA TERRORIST THOUGHT POLICE can think up for pulling his statue down. How about just being a man, a European and having a relatively small amount of melanin in his skin (only albinos are really 'white'). Are't we being constantly told that those characteristics alone are criminal offences?

Don't worry ! Robbie is safe from the inquisition !!!
For the most part, anyway.
Summarizing Wikipedia's main points
Scottish, as in NOT English.
Inspirator to the founders of both liberalism and socialism (not a capitalist).
Grew up in poverty and hardship, and the severe manual labour (no class privilege)
Sympathy with the French and American Revolutions and the advocates of reform and votes for all men.
Burns died in Dumfries, at the age of 37, which was about average in the 1700's.
English view; a "heaven-taught ploughman".
Canadian view; Every year, Canadian newspapers publish biographies of the poet.
US view; Bob Dylan selected Burns's 1794 song "A Red, Red Rose" as the lyric that had the biggest effect on his life.
Russian view; In Soviet Russia, he was elevated as the archetypal poet of the people.
Scottish view; "The Greatest Scot" of all time. Robert Burns won, narrowly beating William Wallace.
So that just leaves the feminists as he only supported a vote for all men but hey, that was a radical idea in the late 1700's. All men didn't get to vote in NZ until 1890, 23 years after Maori 1867, as landowners and women had to wait until 1893.
Interesting ?

I would like Kayli Taylor to let us Know when Rabbie Burns went on trial for rape?