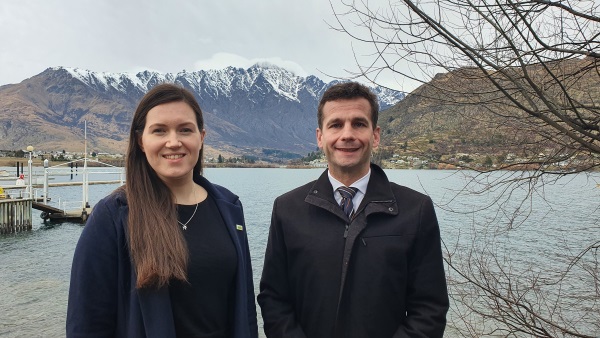 ACT leader David Seymour (R) and deputy leader Brooke Van Velden at The Boat Shed Cafe & Bistro in Queenstown. Photo: Mountain Scene
Queenstowners should be able to sell to whoever they ‘‘damn well please’’ — including foreigners.

That’s according to ACT leader and MP David Seymour, who was in the resort this week ahead of September’s election.

ACT’s Southland candidate Basil Walker this week ditched the party to stand as an independent in Invercargill and, as yet, there’s no replacement.

‘‘We hope to have a candidate, but ultimately you can cast your party vote from anywhere in the country and it has a strong influence.’’

Seymour’s critical of the government for what he calls over-regulation, and he’s scathing of the Overseas Investment Amendment Act 2018, which prevents foreigners without residency from buying property.

‘‘It sends a message that New Zealand is not interested in the rest of the world, and for an international-facing region like Central Otago, that’s hugely damaging.’’

He says overseas philanthropists and conservationists have been beneficial to the region.

Moreover, the Act not only curtails the rights of foreigners, but Kiwis.

‘‘I care about the property rights of New Zealanders — if you own property it’s your right to sell it to who you damn well please.’’

He also takes aim at the government’s $10 million support package for AJ Hackett Bungy, saying it’s not a solution to the problem Queenstown faces.

Seymour concedes there may be a need for a targeted wage subsidy after September 1 for industries being hit hard by border closures, but his focus is seeing the country open up again.

‘‘I don’t see why we can’t simply say ‘Tasmanians can come here’, because if they start coming here, is the Australian government seriously going to lock them up just because they came to New Zealand?’’

He also believes the government should consider opening the borders to some other places, like Taiwan.

‘‘So imagine entrepreneurs saying, ‘we’re going to offer a two-week isolation in a very nice place in Central Otago and you’ve got to stay on-site and if people break the rules you’ve got to pay a serious penalty’.

‘‘You might find there are tourists that want to do that.’’

While the benefits of an open and free market are fairly plain to see there are as many failings in an under-regulated market as there are in an over regulated market. While this article focuses on Queenstown ACT are signalling their clear intention here to allow a free for all for foreign buyers and it won't just be restricted to houses it'll be farms, vineyards, businesses and our resources like water, minerals, forestry. Vote ACT if you want your country sold off to the highest foreign bidder.

Only if Kiwis can buy in their country under the same terms freehold title etc...

Some Political Parties care about citizens, some political parties would sell the country out from under the citizens feet.
There needs to be a correction in property prices, and some people who made stupid investments are going to get burnt, but in the end more Kiwis will be able to afford their own home, and some rich people will own less houses.
Tourism has been unsustainable for years, those who took the risk need to accept the cost of that and stop asking for hand outs. Queenstown's expansion over the last 30 years has priced kiwis out of the area, that needs to change, every boom is followed by a bust, every single boom. If you borrowed to buy over valued property in Queenstown, or anywhere else, then you have to suck it up. If your banks loaned you too much money then they have to learn the hard way.
Let the Kiwi Market decide, and stop selling New Zealand just so a few people can get rich.

Actually, what this policy does is put New Zealand in line with the rest of the world. New Zealander cannot go and buy land in China, or Japan, or the Philippines, etc. but for a long time this one sided situation meant that New Zealand land could be snapped up by foreign investors... while NZers are banned from owning foreign land in many if the places buyers came from. Since we make up around 0.06% of the world's population, the "free market" purism ACT promotes would soon see most of New Zealand owned by foreigners, and New Zealanders unable to compete, becoming renters in their own country. No thanks.

Typical ACT policies.Rich man richer poor man poorer.Nothing new.Most New Zealanders will suffer under these policies.So sad that people who vote for ACT obviously don't care about this country.NZ has been sold off to enough foreigners over the years creating it harder for kiwis to own a home.Foreign ownership does little for our country.

Yeah, let's support ACT and encourage foreigners to invest and buy New Zealand properties, our farms, our stations, our waters, our land, our air.......yeah let's sell everything. Our Iwi and ancestors would turn in their graves. Come on David, pull yourself together, you performed better while you were dancing. Who in Gods name encouraged you to go into politics, I have seen more intelligent life in my hand kerchief. Get a grip....man..

What a breath of fresh air from David and Brooke. Absolutely right and just what we all need. Keep up the vision and don’t listen to the negativity!