Black Hands will leave it up to viewers to make up their own minds as to who was more likely to have been responsible for the murders. Photo: Supplied
David Bain won't be watching the Black Hands teledrama series tomorrow, according to his closest ally who has branded the show "ghoulish" and "pointless".

Black Hands, based on a podcast of the same name, will depict the years leading up to the deaths of Robin and Margaret Bain, along with three of their children, Arawa, Laniet and Stephen in June 1994.

David Bain, the oldest son and only survivor, was jailed in 1995 after being convicted of the murders and spent 13 years in prison before being cleared at a retrial.

In 2016, he got a $925,000 payout from the Government to cover his costs in unsuccessfully seeking compensation.

Black Hands' director David Stubbs and award-winning producer Robin Scholes say the series will leave it up to viewers to "make up their own minds" over who was more likely to have been responsible for the murders.

The TVNZ drama series has been bankrolled by $5m from New Zealand On Air.

One of David Bain's closest friends and longest supporters, former All Black Joe Karam says he finds the premise distasteful. 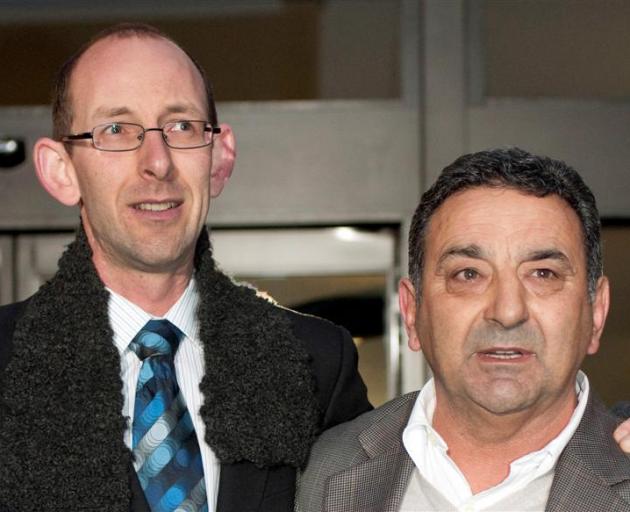 David Bain (L) and Joe Karam. Photo: ODT files
"To me, there's something ghoulish about capitalising on the Bain story," he told the Herald today.

"For people who have suffered a tragedy, and to start the whole thing again, when finally after so long it had sunk away and people were getting on with their lives ... it's all really self-indulgent and at the expense of the Bain family."

Karam admits he'll likely record the show and watch it "when I've got nothing to do".

But he doubts that David Bain, who married Christchurch primary school teacher Liz Davies in 2014, will tune in.

"He's moved on," Karam says, who fears Black Hands is "not going to be very flattering for David".

"So I don't think he'll be watching it. He's not interested really.

"To me, it's a pointless story. What can it possibly achieve? They're trying to say they're showing what these people's lives were like, but it's really hearsay. None of the people whose lives it's about, including David, have been able to have their say.

"And if the Bain family didn't want it shown, that says a lot. Regardless of which side of the fence they're on, some respect should be shown for the fact that this is all over and done and dusted."

David's parents Robin and Margaret will be played by Joel Tobeck and Luanne Gordon, with David's younger siblings portrayed by Lucy Currey as Arawa Bain, Amelia Elliott as Laniet Bain and Angus Stevens as Stephen Bain.

But Karam isn't swayed by the cast or the multimillion-dollar treatment.

"The real story in the Bain case is, how come it took 13 years, when in the space of six months I saw he'd had a miscarriage of justice," he says.

"As soon as it got to an overseas court, they ruled the substantial miscarriage of justice, and then I always said he would be acquitted – and he was.

"If they wanted to spend $5m on anything, it should've been on what went wrong in this case."

Oh my god, WHO CARES. Haven't we had enough of the Bain family in the media over the years. I for one will not be watching this rubbish at all.

Literally digging up the dead for the titillation of a morbid sector of the public, the greed of movie makers and the humiliation of someone who has been acquitted by a court of law. The Bain family have been through enough haven't they?
Public interest? nah, 'profit' is the aim here.

Am watching so far it seems a fair treatment of both David and Robin Bain. It's one of New Zealand's great murder mysteries. Odds are it won t be the last time we see the Bain family tragedy on TV.

Well this article was obviously poorly researched, and clearly amounts to misinformation!

Essentially, the government kicked it into touch, and paid David out to put an end to the ongoing appeals etc.

'agreed to make an ex gratia payment to Bain in the interests of bringing closure to the long-running claim. A full and final payment of $925,000 has been accepted by Bain's team.

Adams stressed that the payment was not compensation, and had been offered solely to avoid further litigation and costs to the Crown."