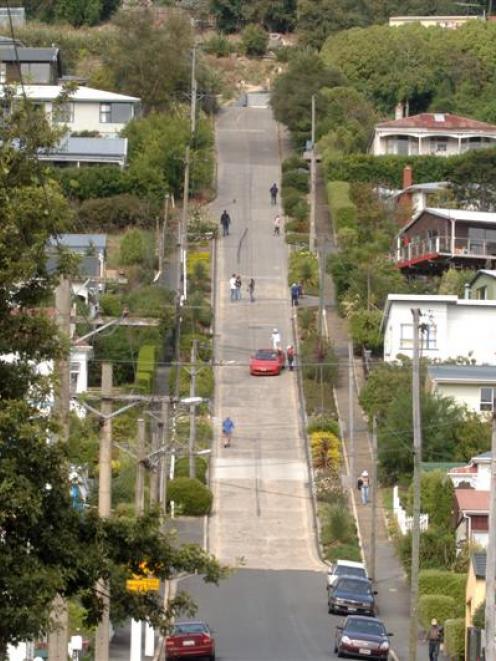 Baldwin St. Photo ODT
A sharp rise in visitor numbers to the world's steepest street has resulted in one Dunedin resident speaking out about tourists she says are walking on to her property and peering in the windows.

She said some tourists had ''issues with the concept of privacy and private property''.

That meant she had people walking down her drive, on to her deck, and peering in her windows, once or twice a week.

''You would be frightened how often that happens,'' Mrs Hyndman said.

Others parked in her driveway, and did ''not always co-operate'' when asked to leave.

One man had even entered her property and stood on an outdoor table to take a photograph.

Mrs Hyndman told councillors the past couple of years had become ''particularly stressful'' as the number of tourists increased.

She had been interviewed by New Zealand and international media organisations about living on the well-publicised street, and had made sure she promoted ''what a great city Dunedin is''.

However, the increasing number of people visiting the street was an issue both for residents and tourists.

Visitors, often with limited driving ability, attempted to drive anything from camper vans to large SUVs or motorbikes up the street.

Once they reached the top, if they made it, they discovered there was no parking, a limited turning circle and plenty of pedestrians.

On one occasion, a motorbike rider trying to reach the top started rolling back down the hill, collecting other motorcycles behind him and pinning one rider under his machine.

It was not unusual for three or four busloads of tourists to be walking on the street where inadequate paths and stairs meant they wandered on to the road, where they sometimes sat or lay down and took photographs, which was not safe.

There was also a problem for residents during the Cadbury Jaffa Race, when they could not access their homes, and had to leave for five or six hours.

Mrs Hyndman called on the council to put more signs on Baldwin St and North Rd to warn people there was no turning and no parking on the street.

Her view, and she had not discussed it with neighbours, was the street should have residents-only parking where it was available, at the bottom of the street.

There should also be resident-only vehicle access as a deterrent to people driving up the street, and improved footpaths for the increased pedestrian numbers.

She said after the meeting she had raised the issue with Cr Conrad Stedman, and Mayor Dave Cull had visited to see the situation for himself.

"He expected council staff would look into the issue to consider solutions."

Yeah right. I'm a resident too and I will do a jig in the middle of Baldwin Street the day this actually gets solved. Good on you Sharon for pushing the point! It's out of control, and residents are sick of tourists taking priority over our safety, comfort and privacy.

Tourists have zero respect for private property, and telling people to get off my property is a daily occurrence too. On the safety aspect, it'll take a serious accident for the council to get off their bottoms and take notice of what residents have been telling them for the past few years.

We need to be honest with ourselves too, and include signs in multiple languages as we have often heard "I didn't understand" as the reason for parking on private property/driving a massive vehicle up to the top of Baldwin Street and inevitably getting stuck.

Count me in to the support for resident only access!

The street has to be open to cars to qualify for the record, but if it changes to residents only it could be classed as a private road - which means the street would lose its 'steepest' record, and there would be NO more tourists. Be careful what you wish for...

A solution would be (messy, albeit) to put signs on your gates/fences, and perhaps tour bus drivers should be telling people not to venture on to people's properties. As well as signage further down the street by North Road.
Or DCC could chip in and build you a new fence, with locks.

You could prosecute them for trespass. It would send a message and rock the precious cruise ship tourist industry.