Ms Graham’s official start date was October 12; she has had a round of meetings with groups of staff since and says she was heartened by the level of engagement.

"Everyone feels ready to get things done."

Ms Graham is conscious of the need to balance aspiration with affordability and for the council to manage and meet community expectations.

Like is probably a weaker word than she means. During the job interview process, she used a 10-year plan consultation document as a prop, noting what had and had not been achieved. The clear implication is the Dunedin City Council will not be allowed to under-deliver under her watch.

Ms Graham (55) considers maintaining a strategic outlook while not neglecting detail to be among her strengths and says she has the right team around her. Getting processes right is a strength of other people whose knowledge can be used. She sees her job as giving effect to what councillors and the community want to achieve.

There is much to be weighed up.

Dunedin needs to plan for growth, but the city’s housing stock is inadequate, underground pipes are ageing, an upgrade of the main shopping street is pending, South Dunedin looks vulnerable to climate-change impacts, the council is set to beef up its kerbside rubbish and recycling system and it aims to reduce greenhouse gas emissions, a mid-sized theatre could be built or redeveloped and fears about traffic congestion persist.

Councillors have allowed the council room to take on a lot more debt, and they will be pondering this weekend whether they dare go to the public with a proposed rates rise approaching 10% for next year. Capital spending in the next 10 years could be as high as $1.5 billion. The actual level of debt at the end of June last year was $243 million, but it may climb as high as $869 million in 2031 if councillors do not cull projects from draft budgets.

Those decisions will be for councillors, and Ms Graham will lead the implementation of whatever they decide.

"Affordability is front and centre of my mind," she says.

Outside of work, Ms Graham likes to get out on the golf course, jump on the rowing machine, cycle and watch sport on television. She loves to read thrillers and spy books.

She is married to Liz Spector, whom she met in Texas, and has two sons, aged 14 and 11.

They have two dogs — Trevor, a big mongrel, and Barney, a small mongrel — and an African grey parrot named Gryffindor.

Ms Graham has watched recent events in the United States with great interest. When rioters were storming the Capitol, she observed on three screens — her television, iPad and mobile phone.

She has been there.

In 2013, Ms Graham took up a month-long fellowship, paid for by the US State Department. She had access to the Senate Chamber in Washington, DC, which became a scene of chaos this month.

Her fellowship also took her to Dallas, Texas, where she came across the University Park city secretary or governance manager, Ms Spector. They had a chat and a drink and hit it off.

They fancied getting an Elvis impersonator to marry them in Las Vegas, but opted for a registry office instead and celebratory beers in Dunedin at their favourite pub, Tonic (now Sessions).

Ms Graham heads an organisation employing about 1100 people, or 810 full-time-equivalent positions. A council chief executive needs to be able to manage and lead people, write well, stay smart, understand figures, have a thick skin and a degree of experience, she says.

Ms Graham says she enjoys her interactions with councillors and strives to put them in a position where they are well informed by staff reports.

"I get a great deal of satisfaction when the meeting has run smoothly — when the content of the reports hasn’t created an issue for councillors."

One big challenge for her predecessor, Sue Bidrose, was the fallout from a fraud investigation that embroiled the council’s Citifleet manager, Brent Bachop, who then took his own life. The discovery of the fraud prompted three senior council staff to resign, though they were not directly implicated.

The legacy of that may include more caution within the organisation.

She is careful not to advocate a relaxed attitude to dealing with public money, but she would like to move away from a culture of blame.

Dr Bidrose has said being under the scrutiny of the council and public was difficult at times.

"It can be hard being questioned."

Ms Graham had a taste of this herself in the High Court last year, when she was a witness in a case brought by Dunedin councillor Lee Vandervis, who challenged being found in breach of the council code of conduct. Ms Graham was somewhat peripheral to proceedings, but says being cross-examined by a Queen’s Counsel was not fun.

She says she has enjoyed every minute as chief executive, apart from the court case, which Cr Vandervis lost, and the downpour this month that caused flooding in Middlemarch. Dunedin’s infrastructure performed reasonably well, but Ms Graham was conscious the deluge might have been a defining moment if the damage had been more severe or widespread.

Ms Graham aims to clear the blockages that prevent systems from running well and to stay focused.

"I want to make sure staff are all working on the right things." 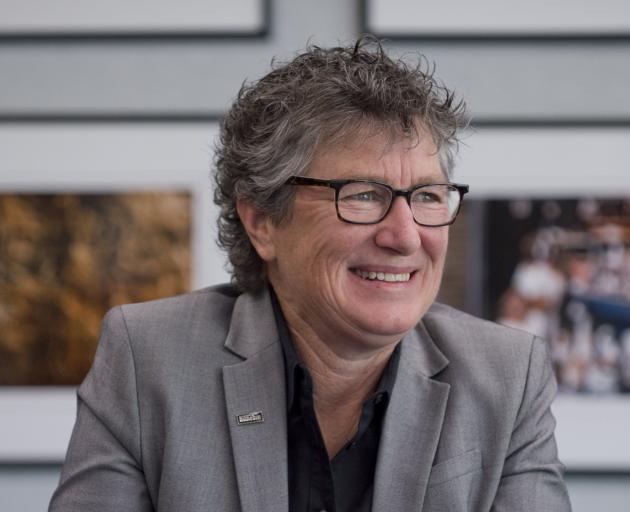 Sandy Graham has a five-year contract with the council. PHOTO: GERARD O'BRIEN

It was not always apparent Sandy Graham was destined for the top job at the Dunedin City Council.

She dropped out of university and worked in a city roading crew, shovelling gravel, operating a stop/go sign and doing kerb and channel work.

But she went back to the University of Otago and completed a law degree, then did a master’s in library and information science at Victoria University of Wellington.

Ms Graham obtained work at the University of Otago library, then found employment at the Dunedin City Council in 2007 as a webmaster and her ascent in the organisation began.

She became governance manager in 2009 and was corporate services group manager for three years from 2013, before joining the executive leadership team as strategy and governance general manager.

When she was appointed city services general manager in 2018, her portfolio ranged from parks and recreation to property and planning policy.

The departure of chief executive Sue Bidrose led to Ms Graham being appointed acting chief executive last July, and she declared she would seek "the permanent gig as I am totally committed to what we have created as an organisation and what we are delivering for our community".

"A council chief executive needs to be able to manage and lead people, write well, stay smart, understand figures, have a thick skin and a degree of experience, she says."
OK Ms Graham, here's your first question and it concerns understanding figures. If a ratepayer has a fixed income how is that person realistically expected to find rate increases plus rises in charges by a council-owned lines company that are 5 times the rate of inflation? I really do hope to hear a well written answer to this question. Or does having a thick skin mean you can ignore me and all the other people in Dunedin who are asking the same question?

A thick skin is necessary due to the reflexive, often hostile reaction to anything "Council". In this case, you are so exercised you are giving orders.

And peoples negative reaction to anything council is well founded. There is a continuing run of waste and idiocy within DCC management. From bike paths being built 3 times and to more recent examples as the failure to properly look at the building DCC bought for the Sth Dunedin library. That latest mess has cost ratepayers millions already and another $11 m to come.

I will believe she is capable of doing the job when she starts sacking those responsible for faulty decisions. $400k a year is a lot of money for someone who just thinks trying hard is good enough.

Seemed to be a fair question to ask following news of the council's proposals this week. Did I hit a nerve?

I guess then that you have an unexhaustable pot of money for rates and care not for those who don't.

Elderslea O F...on point. You are correct. I get the distinct feeling that over 60’s want to lock the city down to zero growth & zero spend.
The demographic who should be asked and taken notice of are the 18’s - 49ers. It’s their future.

Well, actually... since you want to ask and will take notice (just because of my age too)... I'm also sick of the rates hikes, which come ON TOP OF the higher rate charged due to increased property values. I am sick of the council indulging in vanity projects and ignoring the basics. Furthermore, it is not the council's job to ensure growth. That is up to us as members of this community. Us who run businesses, develop start-ups, choose to buy local, choose to put our effort into our own community. The council needs to get the basics sorted (water, waste, roading, infrastructure), which have been neglected for years... and leave the stadiums and the waterfront developments to others who have the money and want to throw it around.

So you are proposing that the opinion of anyone over 50 in Dunedin can be disregarded by the local government? Now I consider myself to quite radical - but that's truly a revolutionary stance, as well as being ageist. What if the over 50s agree with the council's decisions from time to time - do the same rules apply?

Oh for goodness sakes Mikenette, are you kidding? Please don't play the age card. There are two ways to divide society....AGE and RACE. I think you will find the over 60's have learnt a thing or two about the balance of income and expenditure.
Lol, be sure to step aside when you turn 49 and let all the young and inexperienced make all your decisions and choices for you!
Now let's all be nice eh? Everyone has something to offer, youthful energy all the way through to elderly wisdom and experience......we are ALL part of society. Finally, many 'older' people I speak with have every concern for the younger generation and are still making sacrifices to assist them. Careful who you criticise......people over 49 have a future too!

'There are two ways to divide society....AGE and RACE.' I think you're forgetting SEX Buzz.

Lol, my partner has said the same thing Nightimejohn.
After I posted the comment I then thought about gender and religion, then rich and poor. I guess society can be divided on many levels, though all quite unnessessary.
Mikenette's comment reminded me of a programme series back in the 70's......
'Logans Run'. Where anyone over the age of 30 was 'sent away'......