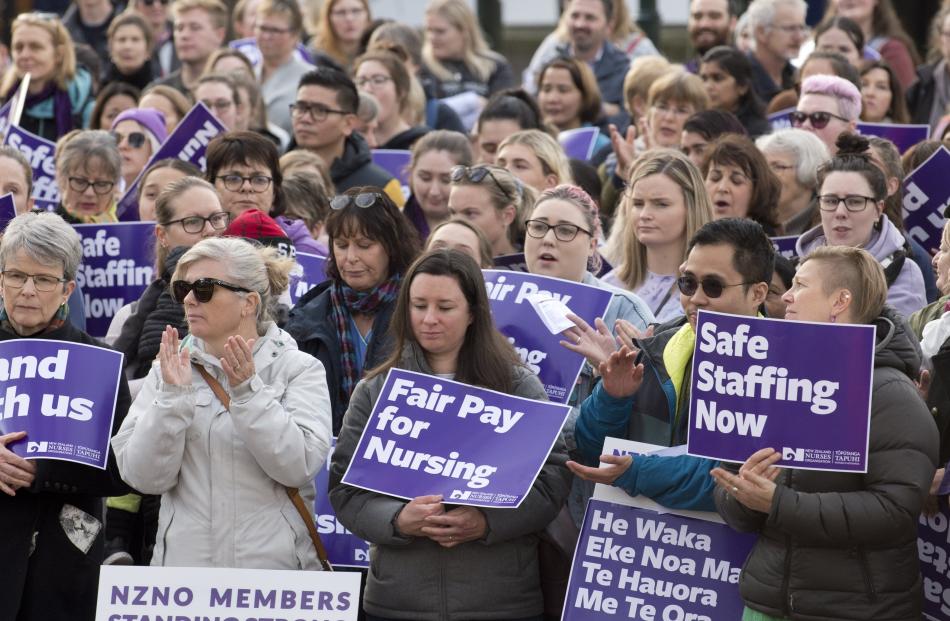 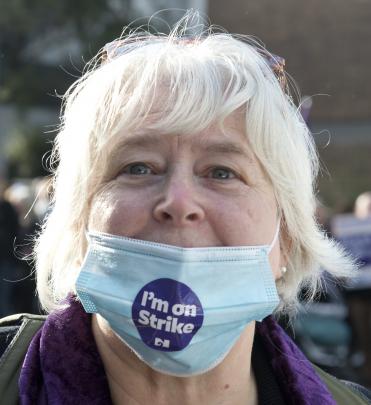 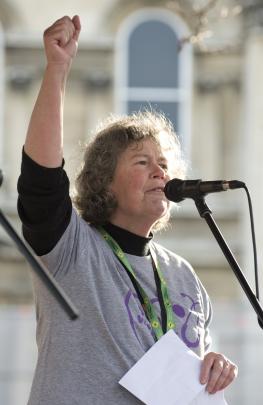 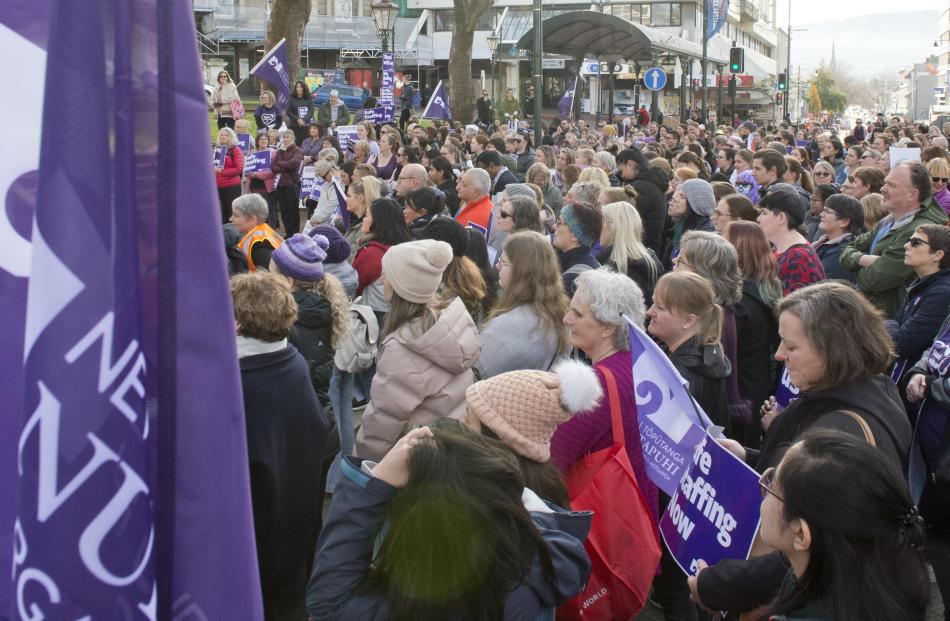 New Zealand Nurses Organisation members walked off the job at 11am, after talks to settle their collective wage agreement collapsed. 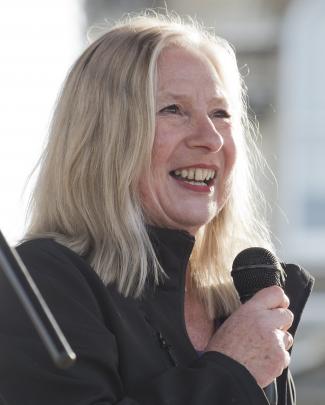 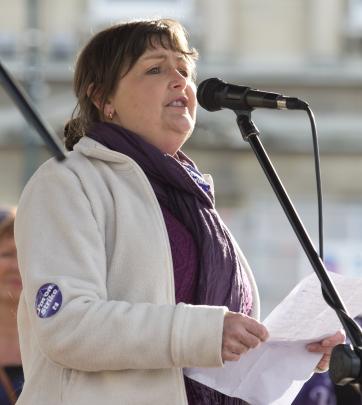 Frances Weaver, a Health Care Assistant on the surgical ward at Dunedin Hospital.

About 400 nurses and supporters marched down George St this morning at 11am as an eight-hour strike began.

The Southern District Health Board had expected that most of its nurses would not be working.

The nurses walked out of the Dunedin Hospital this morning and gathered outside the University of Otago Dental School before marching to the Octagon for the rally.

Nurses want a higher pay increase than that offered by district health boards and improvements to safe staffing levels.

Many of their colleagues remained at work, as nurses are obliged to maintain life preserving services if they strike.

The SDHB postponed planned surgery and appointments both for the days before the eight-hour strike and on the day itself.

No figure was available for how many patients would have their care disrupted, but when NZNO nurses last went on strike, in 2018, 450 patients were affected in what was a 24-hour stop-work.

"In addition to excellent contingency planning before the strike, our staff have done an outstanding job today. The commitment to working together, supporting patients, their families and each other has helped to minimise the disruption as much as possible," he said.

"We greatly appreciate the understanding of patients and whānau during this time especially those who have had planned procedures and appointments postponed.

"I would also like to extend my thanks to Southern DHB staff and our colleagues in general practice and other health services in the community who provided additional support and care as it has been required today."

Yesterday Prime Minister Jacinda Ardern said the Government had made a pay offer which would substantially raise the pay of the lowest-paid nurses.

"At the moment they are asking for 17% and we are just not able to fund that at this point in time."

The NZNO argues that current pay rates do not attract people into the nursing profession or help retain nurses, and that better pay and conditions in Australia will result in nurses leaving this country now the transtasman bubble is open.

A Dunedin NZNO member striking today said as a young nurse she would be heading to Australia if conditions did not improve.

"New Zealand nurses are one of the worst paid in First World countries.

"We are highly qualified and highly skilled and our entire team, including healthcare assistants, new graduates, midwives, practitioners and senior nurses, deserve better."

The strike was held from 11am-7pm.

Nurses already earn far far above average. The work isn't even high skill or their hours too long. Sure, they work unconventional hours a bit but so do a lot of people.

I guess this is what happens when you rub noses with doctors and highly trained professionals and compare your salary. It's just gross how they are asking average kiwis who earn less than them to pay more in taxes to pay for them, they should do it for the love of helping people, not money.

Why do none of these articles ever mention nurses average income and hours worked per week?

Rubbish. Highly skilled, lives in their hands, and on Outreach.

Fishing well today. Most nurses do a fantastic job and most do go over and above.
Whilst many others have roles that incorporate terrible hours and conditions, Nurses often are the difference between life and death.
Not that hard to understand why they feel they are worth a little more.
You show me on Car Salesman, Land Agent or tradesman who in their day to day that has saved a life.

A lot of people in general do a fantastic job and go over and above yet don't make $30+ an hour. Nurses don't have terrible hours/conditions - maybe slightly below average, but they are well reimbursed for it and get other benefits compared to other jobs like being able to say 'I help sick people'. I think it's pretty rare for a nurse not a doctor to be the difference between someone's life and death, probably as rare as it is for people in other professions, eg people building properly, people wiring properly to prevent fires, people ensuring your car is safe at a wof etc.

The point was that nurses wages come out of non-nurses taxe. Asking people who are already struggling and make considerably less on average to pay them more in taxes, especially during a recession, is disgusting.

Today ... you're obviously extremely well educated and very knowledgeable regarding medical matters, but I would like to ask you whether you've been in hospital for anything that could be classed as "life-threatening" and actually taken any notice of what nurses really do? Remembering there are several "grades" of nurses from recruits to operating theatre nurses who you probably never get to meet because you're under anaesthetic and have absolutely no idea what they're doing.

I take my hat off to them and hope they get an increase in pay rate that reflects the amount of work they do ... both seen and unseen by the general public.

Today ... I just have a niggling doubt as to whether you'd actually handle a week of being a nurse.

I stood on the picket line with the nurses today after work as a member of another union. Through solidarity all workers can demand better conditions and pay. You seem to whinge about taxes in a country of great wealth where our taxes are pretty low by international standards and we get so much for our tax dollar

The other whinge you seem to have is that others who get less don’t do as well. They should join a Union and bargain collectively. If you or those you refer to aren’t demanding fair pay then do not be jealous of those who do and deride them. If you are not prepared to stand together for better treatment from your employer then do not attack those who are.

Anyone of us can find ourselves in need and nurses are the eyes, ears and often hands of the doctors you mention. They deserve better hours, pay and conditions so their patients like you or me can get the best treatment our tax dollars pay for.

This is only the second nurses strike in living memory and if they say it is necessary then I believe them. Who has more integrity in the equation? Nurses or bureaucrats and politicians? Nurses.

Anyone who has spent a reasonable amount of time in a ward will know that a good nurse is worth their own weight in gold. They are barely recognised for their indepth knowledge, skillset and commitment to patients and their pay is too low. They are the lifeblood of any hospital and as such deserve to be given fair working conditions and pay that at least keeps up with inflation.

For nurses working on the floor (not management etc), the top of the pay scale is around $77,000 - nowhere near $130,000.
Not sure anyone who says nurses are not highly skilled really understands what the job entails. This strike is also for healthcare assistants who get around $45,000.

I think the people who are making this call should try shadowing a few nurses for a day or two and then maybe decide how valued they should actually be! They are the backbone of our health system, if you can't improve their working conditions (which should also be done) the least you can do is pay them properly!

listen to what they are saying they are understaffed /and anyone that has visited the hospital over the last 5 yrs can see it - over the holidays they are down to skeleton staff with no replacements thus the sick are not getting services that are needed e.g stroke patients no physio and not considered an essential service - nurses are being expected to care for many more patients than is acceptable /they have no support

Everyone wants more money - even pensioners.
Everyone thinks their skill set is higher than others,
I know some other health professionals like Pharmacists who are only on $30 an hour. Paramedics are paid less. In rurak areas they get nothing.
Nurses attract the sympathy support.
My only remark to them (and teachers) is when you were poorly paid under the national govt -why didn't you strike then???