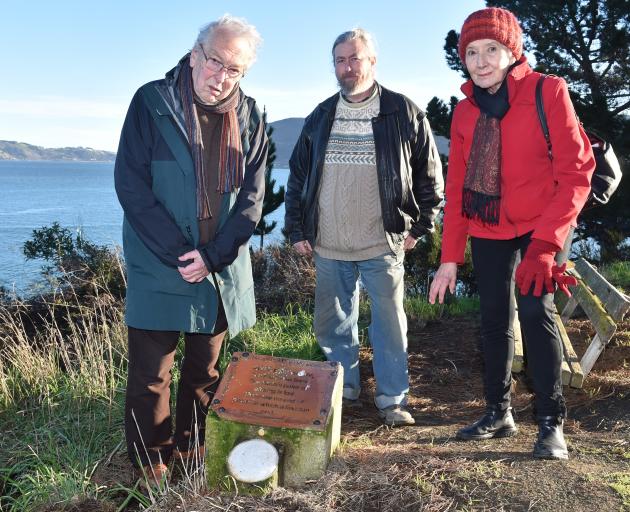 Back Beach Writers members (from left) John Holmes, Robert Free, and Anna Holmes are saddened by the vandalism that is happening on the poetry plaques their group installed at Port Chalmers five years ago. PHOTO: GREGOR RICHARDSON
The poem "Being and Pointlessness" is the latest target of vandals in the often quiet, unsealed Peninsula Beach Rd behind Port Chalmers.

The ceramic artwork adorning Paul Chapman’s poetry fragment, part of the 11-poem Back Beach Poetry Trail, was removed from the installation last weekend, members of the Back Beach Writers group said.

But speeding, fly tipping, and damage to the poetry trail were all seemingly increasing in the area.

And since there were no anti-litter groups or anti-speeding groups to speak up, the writers had decided to.

"People don’t seem to be appreciating what’s here or what they’ve got, or acknowledging the beauty of the place; it just seems a shame," Mr Free said.

"I doubt if they’re anti-poetry, or anti-anything, it’s just that there’s something there to smash and offend."

Anna Holmes’ poem, a reflection upon nearby Quarantine Island, was damaged, but largely restored, in February.

Dr Holmes said she was concerned by "a lack of care, a lack of engagement, a sense of fragmentation, which is very sad".

Members of the Back Beach Writers live locally and created the trail of poetry fragments on ceramic tiles by artist Tina Grubba in 2017.

Ms Grubba had since left the area and her artwork destroyed by vandals was likely irreplaceable, Mr Free said.

so sad as that is a great little walk - sounds like our west harbour community board not on top of things.