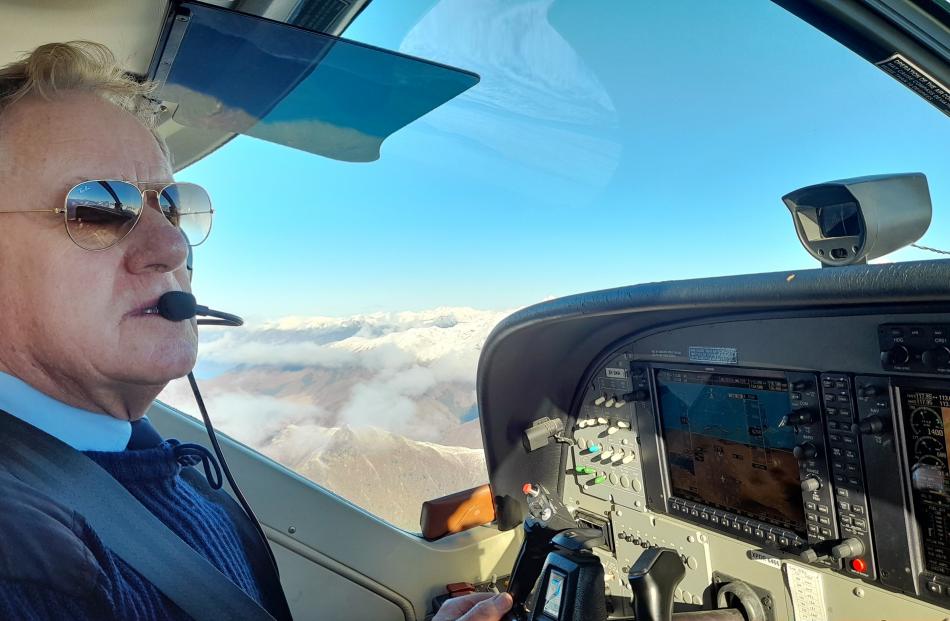 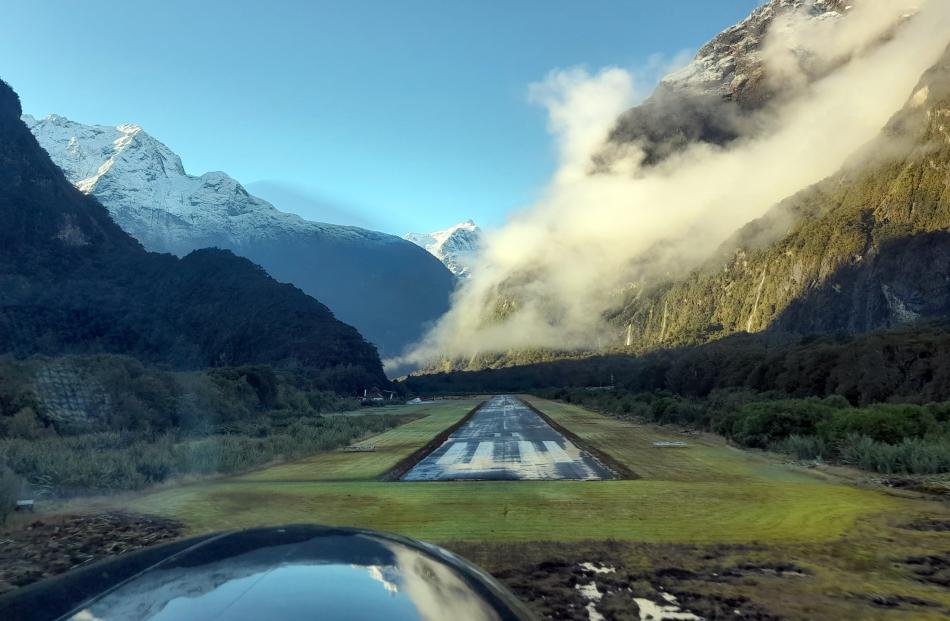 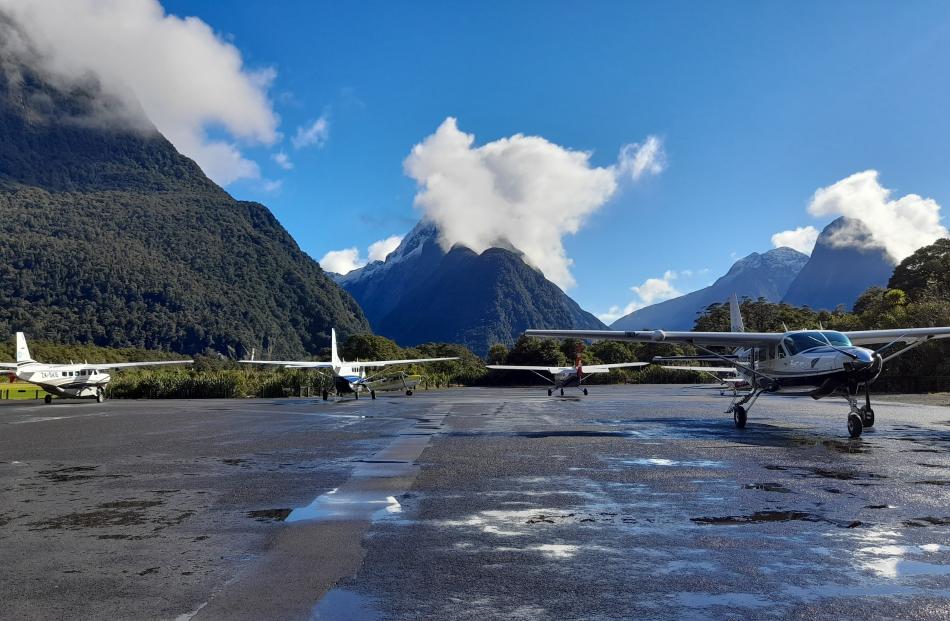 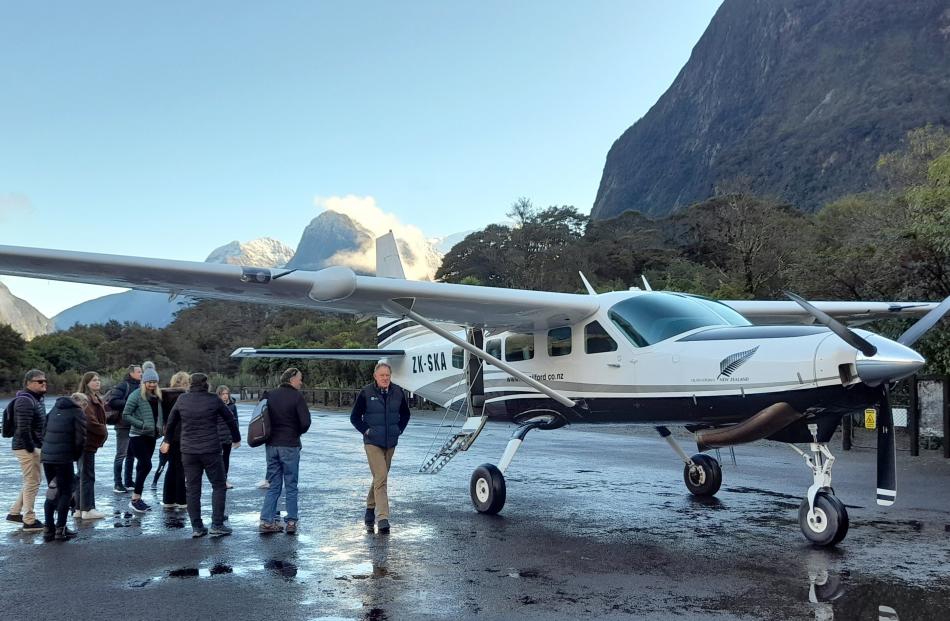 A group of tourists wait on the runway. 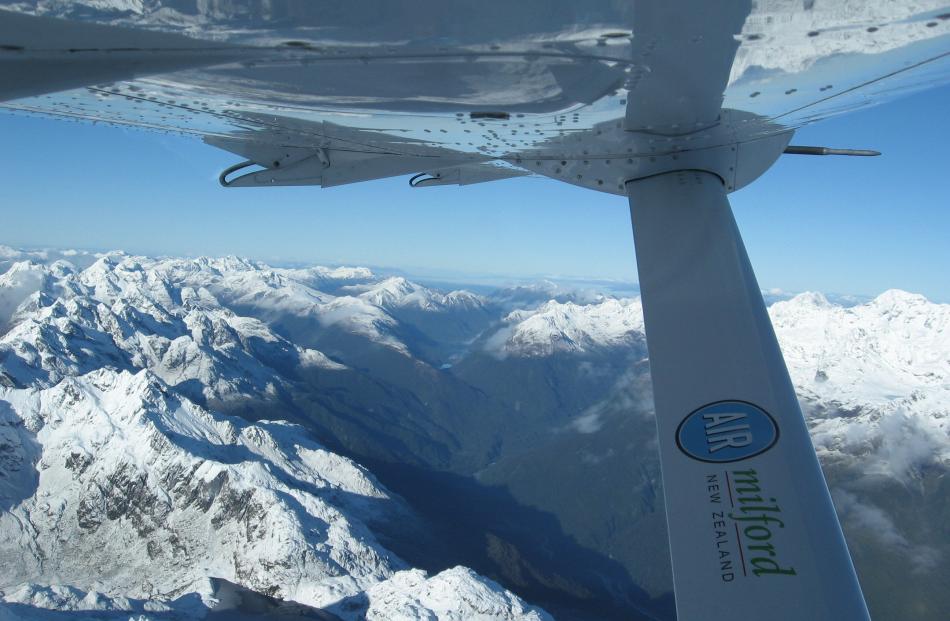 Air Milford boss Hank Sproull is fighting to save his premier tourist air service from going the same way as the small native bird the piopio.

The last of the extinct piopio was seen in Fiordland more than 100  years ago, and it is mainly remembered now in the Maori name for Milford Sound - Piopiotahi.

Milford Sound tourist flights are a fundamental part of Mr Sproull’s business, but the threat of extinction hovers over his service. Mark Price reports.

Doing away with Milford Sound Airport is one of the ‘‘key concepts’’ of a group set up to plan the future of tourism infrastructure at the highly popular tourist destination.

The Milford Opportunities governance group, headed by retired director Dr Keith Turner, considers the airport and the aircraft that use it detract from the tourist experience.

They want it gone — the tarmac lifted and replaced by native planting and a walkway.

Hank Sproull and a half dozen other flight-seeing operators have joined forces to save the airport.

Mr Sproull says the biggest problem at Milford Sound is not the aeroplanes.

‘‘It’s not the aircraft that are ruining the experience.’’

The operators have the backing of Queenstown Mayor Jim Boult, the only member of the eight-member, now disbanded, governance group wanting the airport retained.

‘‘We live in a time of rapidly advancing technical development in everything we do but particularly in aviation.

‘‘Electrically powered aircraft are now operating commercially in some parts of the world. Operators into Milford are likely to be amongst the early adopters of this technology and in my view it will not be too many years before we see this as the norm on Queenstown – Milford flights.

‘‘There is a significant part of the market which will pay a premium for such an experience. Electric aircraft are obviously environmentally sustainable and quiet.

‘‘We are walking away from the opportunity to see this develop.’’

Sounds Air, which operates between Christchurch and Wanaka, plans to have an electric plane in service in 2026.

From an Air Milford Cessna Caravan, on a recent sunny winter’s morning after a fresh fall of snow, the view was simply magnificent.

While making small adjustments to the controls during the 35-minute flight from Queenstown Airport, Mr Sproull provided details about mountain peaks, glaciers, tarns and waterfalls.

He has flown the route a thousand times.

The planeload of North Islanders drifted past Fiordland’s highest peak, Mt Tutoko (2723m), turned from west to east over the Tasman Sea and floated into Milford Sound to a smooth landing on the airport’s long strip of tarmac.

The sandflies were still active, but in these Covid-19 times, Milford Sound was a shadow of its former self.

The 50 bus parks were empty (at least that was the case mid-morning), and just a handful of tourists had taken the spectacular drive or flight to the ‘‘jewel in the crown’’ of New Zealand tourism.

But the Milford Opportunities governance group’s plans are for when tourism is working at full noise, as it was in 2019 when 870,000 people visited.

It has no place for the airport, and scattered through the master plan are quite a number of reasons why.

It lumps planes in with cruise ships as activities that ’’detract from the beautiful natural setting’’.

‘‘The runway floods at high spring tide, which will worsen as sea levels rise.

‘‘The tarmac is also weakening due to decaying trees within the foundation, and the Cleddau River groundwater is undermining the runway foundation.’’

In the transport and access document accompanying the master plan, Stantec integration specialist Darren Davis raises the ‘‘operational and safety challenges’’ of an airport in a mountainous area where the weather is highly changeable.

He lists aircraft crashes going back to 1989 when a pilot and nine passengers died in a crash on a Wanaka to Milford flight, but notes there have been no incidents in the past 18 years.

He says the area was environmentally sensitive ‘‘with the presence of threatened fauna’’.

The runway is flood-prone, ‘‘slowly sinking’’ and in need of major reconstruction work.

It prevents direct access between different parts of Milford Sound, and there is a lack of facilities for air passengers.

He predicts helicopters ‘‘should more than adequately accommodate high-value, time-poor visitors, and address resilience issues, including the ability to evacuate people in the event of a natural disaster’’.

The master plan claims only a ‘‘small proportion’’ of visitors use the airport which occupies a large portion of the flat area of Milford.

To each of these Mr Sproull has got or is preparing a response.

‘‘We need this airport for our business.

‘‘If it’s removed, it’s going to shut down all the flight-seeing companies from Queenstown, Wanaka and Te Anau.’’

There are six companies with a fleet of 30 planes.

‘‘It’s going to be a huge loss of work ... the stress of all of that for no particular reason.’’

He disputes the governance group’s numbers, claiming fixed-wing aircraft carry around 10% (80,000-90,000) of visitors to Milford Sound, not the 3.5% cited in the master plan.

He notes that at the behest of the Department of Conservation, his company invested in bigger, quieter aircraft.

A Caravan costs $2million-plus and Air Milford has four.

He considers the airport to be of strategic importance, particularly when avalanches close the only road into Milford Sound.

‘‘It’s critical to have it on this side of the Alps.’’

The governance group described the master plan as a ‘‘shared vision and strategy’’ developed in partnership with ‘‘key stakeholders’’.

But, it included no representative of the aviation industry.

Mr Sproull sees a certain amount of politics at work.

The master plan was prepared for the Southland District Council which he considered has the aim of benefiting Te Anau.

Indeed, one of the master plan’s ‘‘key concepts’’ is to Increase usage of the Te Anau Airport at Manapouri.

Under the plan, Air Milford would still be allowed to run scenic flights over Milford Sound, but landing at Te Anau instead.

With the runway gone, and part of it given over to use by hop on/hop off buses, Mr Davis considers Milford Sound could handle up to 185% of current demand.

The runway was constructed in 1952 by tourist flight pioneer Popeye Lucas and Mr Sproull sees it as part of the Milford experience, ‘‘an integral and strategic part of this area’’.

The governance group will make its recommendations to Government, with Keith Turner keen to see the airport gone ’’relatively soon’’ to alleviate uncertainty for flight-seeing companies.

But Mr Sproull vows to fight.

‘‘We will take it to government level.

‘‘We will go wherever we have to go to make sure the airport doesn’t get closed.’’

‘‘If it’s removed, it’s going to shut down all the flight-seeing companies from Queenstown, Wanaka and Te Anau.’’
Just thinking a little bit out of the box ... but the places mentioned all have something in common with Milford Sound ... water!

I'm no aircraft engineer, but I do know that there is an amphibious version of the Cessna Caravan. It's got a little more power than the land-based version, but maybe Hank should look into the costs of converting ... anyone who's been on a float plane knows it's just a little more exciting than taking off from land !

I think this is really very short sighted. Electric planes are just around the corner, and somehow it is preferable to bus humans via Te Anau from Qtn? Which bit of the environment are we trying to protect here? Milford is ruined by the buses, thousands of ant like humans crawling over everything, and the noisy non stop sightseeing boats. I'd swap that for electric planes any day, and as Concerned suggests, float planes would be even cooler. It's been very pleasant since covid hit, but if tourist itineraries are 'go go go South Island in 5 days or less', and Milford is a top 5 destination, electric planes sound like a great bet to me.

Surely health and safety would ensure the airstrip not only remain but be one of the top priority assets on top of the maintenance schedule. what if.....Earthquake, Avalanche, fire, cruiseship/sightseeing launch incident. The airstrip would be a medivac/search and rescue or firefighting lifeline. Reminds me of the similar pool of clowns doing away with our only fuel refinery up north.