Architects Kengo Kuma & Associates, who designed the Tokyo Olympic Stadium, say the proposed luxury lodge will merge into the landscape. IMAGE: SUPPLIED
A Wanaka environmental campaigner is gearing up to fight a billionaire’s plan to build a luxury lodge on the shores of Lake Wanaka.

It has been 10 years since the Upper Clutha Environmental Society and the Wanaka Residents Association stopped controversial plans for six houses at Damper Bay by Auckland businessmen Craig Heatley and Trevor Farmer, and Mark Taylor, of Queenstown.

"We stopped the Auckland rich-listers. Great. Now we’ve got to take on an even richer person," he said yesterday.

Former residents association chairman Graham Dickson said he would be "very surprised" if t he application was granted.

"I’ve only seen the picture in the ODT.

"It sounds a fairly major development, perhaps bigger than the original one." 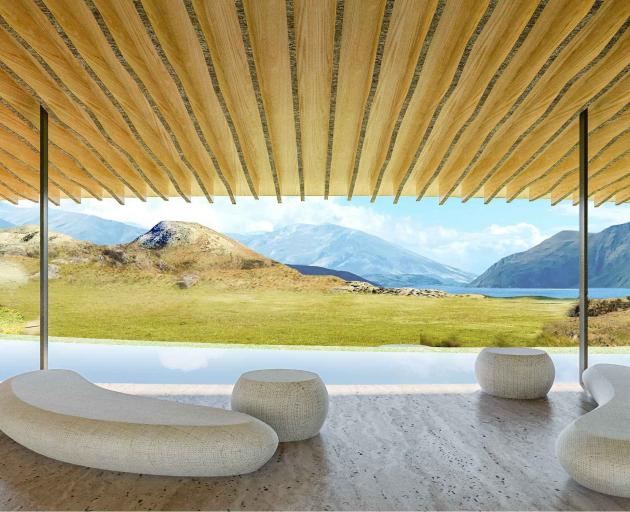 An architect’s impresssion of the view from the interior of the proposed luxury lodge. IMAGE: SUPPLIED
Mr Thiel, a United States technology businessman, was granted New Zealand citizenship in 2011, despite having only spent 12 days in the country.

His Wanaka property has been reported to be a possible "preppers paradise" for rich Americans fleeing doomsday scenarios to live in underground bunkers in New Zealand.

"I think they are dressing it up as visitor accommodation," Mr Haworth said.

In his opinion, the proposed meditation and wellbeing centre was an attempt to secure a much larger development than the one turned down by council commissioners Trevor Shiels and Leigh Overton in 2011.

The society’s first move would be to meet, assess the application and request a site visit, he said.

Mr Haworth felt the development would struggle to comply with tough district plan rules for outstanding natural landscapes and the test of "reasonably difficult to see".

"Ask yourself. Are they going to have lake views? Yes. So then, will it be visible from the lake? Yes," he said.

Visibility of development in an outstanding natural landscape was a major reason why the previous application was rejected.

At the time, Auckland architect Pete Bossley gave evidence that any house built at Damper Bay would have to meet unusually strict and unique design controls.

Plans show the building merging into the landscape.

Council spokesman Sam White said the development would not be fast-tracked under Covid-19 economic recovery legislation.

The applicant had requested the application be publicly notified for submissions.

It was likely that would happen within 20 working days, unless further information was required, Mr White said.

Environmental activists.
Been stopping progress since it was cool to be one.
Yet our urban sprawl continues to grow?

Good on you Julian Haworth. Definitely respect your efforts over the years. And indeed "meditation centre" ! Wonder what Citizen Thiel would be meditating?

Oh for goodness sakes, yes, lets just lock everyone out. Doomsday bunkers? sounds like media hype bytes! and who cares if they did build bunkers? The climate is changing, let them prepare for it. Only "12 days visiting NZ" before becoming a citizen, ....who actually cares? Come on, how many people have moved to another town and become a 'citizen' when they have only 'visited' it a couple of times at best? And look, it's as if the retreat is five storeys high with facades of plate glass! The landscape has been long destroyed when all the trees were burnt out! Want to improve the view? Mr Haworth and his band of followers would do better planting native trees back into the area. How about 'working with' the rich listers to restore the area instead of 'fighting them' over the view. New Zealand is becoming one of the most overly regulated countries in the world with a population of people who jump up and down at the slightest hint of change or development. Let the architecture speak to the environment, there is a lot worse development in Queenstown and Wanaka!

The development looks good and sympathetic to the local area. I hope it gets approval. The reported comments of Haworth sound like bitter envy.

Exactly, thank you, somebody with a little commonsense.

Mr Haworth, you really have little to do.
If all developers in Queenstown of any shape or form, were stopped, so would you beloved debt ridden Queenstown.
His development looked amazing, thoughtful and blended in with the landscape........just like
5 mile etc ???

Plenty of Native Planting/Action Groups in the Upper Clutha for everyone. Get involved yourselves !

And SOMEONE needs to stand up and be that Standup guy.. Sounds like the Bitter Envy is from some not being up to it : )