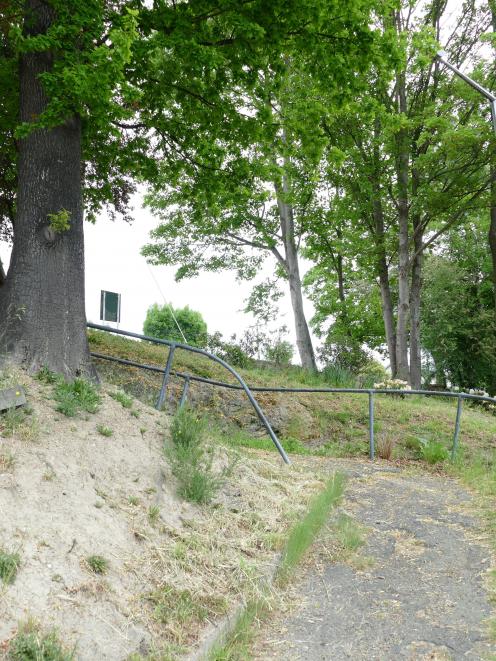 The Lawrence-Tuapeka Community Board has decided this oak tree near the top of the town’s Zig-Zag Track will be cut down because of safety concerns. PHOTO: RICHARD DAVISON
A prominent Lawrence tree is to be felled, due to safety concerns about its effect on the adjoining footpath.

The mature oak tree, which can be seen from Lawrence’s main street near the top of the town’s Zig-Zag Track, which links Lancaster and Colonsay Sts was the subject of a recent public consultation about its future, after health and safety concerns were raised during planning for upgrades to the track in May.

At that time the Lawrence-Tuapeka Community Board concluded the tree was a safety hazard because its acorns and leaves made the steep track slippery.

Concerns were also raised about the continued impact of the tree’s root growth, which was lifting the track surface, on any refurbishment.

During Wednesday’s board meeting in Lawrence, Clutha District Council service delivery group manager Jules Witt told members the council had received only one submission regarding the proposal to fell the tree.

The submission, made by nearby resident Peter Flower, questioned the necessity of felling a ‘‘perfectly healthy’’ tree.

In his submission, Mr Flower said acorns on the path were less of a problem than loose grit, and were ‘‘hardly a good reason to chop [a tree] down’’.

Despite his appeal, the board voted unanimously to proceed with the felling.

Several members of the board cited an arborist’s report saying the tree should be felled.

That report, from Toby Young, of Waitahuna firm TreeArb, said the tree could lead to potential slip or trip hazards, causing ‘‘significant or severe consequences’’.

Board chairman Geoff Davidson concluded the discussion saying it was a case of ‘‘right tree, wrong place’’.

Regarding the decision, Mr Flower told the Otago Daily Times he was ‘‘disappointed’’, but declined to comment further.