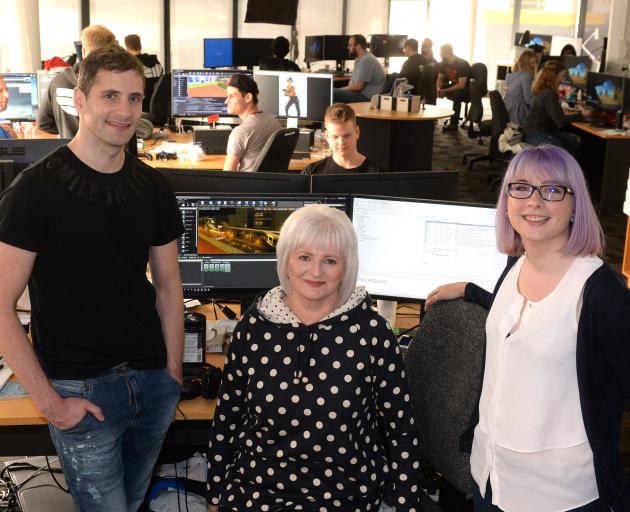 Dean Hall, Andrena Hall and Stephanie Hall. Photo: Linda Robertson
There is something of a family feeling about RocketWerkz, the Otago Daily Times Business of the Year. Business editor Dene Mackenzie talks to the company founder Dean Hall and his sister Stephanie Hall about their successful rise.

When Stephanie Hall learned her brother Dean Hall wanted to start a video game studio, she told her mother she wanted to help with the administration.

Little did she realise the administration  would go  from filing a few emails to helping run what has become a globally successful company, operated from an office in Wharf St with a stunning view of the upper harbour.

Andrena Hall, the mother of Dean and Stephanie, is also involved in the day-to-day running of the company and father Graeme  has provided plenty of advice to them all, according to Dean.

"My dad, have you met him? He is involved in everything," Mr Hall said.

For Dean Hall, RocketWerkz is the realisation of a life-long dream. Although only 36, Mr Hall says he has been involved in gaming for 27 or 28 years.

He liked the social aspect of gaming. When he was travelling, he could play games with any of his friends no matter where he or they were.

Stephanie (30) used to watch her brother play games from an early age and suffered his taunts about the types of games she liked to play.

When his family was living in Oamaru, Mr Hall remembers his parents spending about $3000 to buy an Amiga 500.

"This was a bit of an outlay for my family, as we were not wealthy, but the Amiga is what I cut my teeth on. Once I learnt how to use the ‘peak’ and ‘push’ commands, I was away."

Mr Hall taught himself to write to the memory of the computer — fiddling with its brain, as he put it.  Once he started writing commands directly, he was hooked.

He learnt Amiga Basic, a computer language written by Microsoft before it got really big.

The siblings then went halves in a PlayStation, allowing Stephanie to play Sim and their mother to play games she enjoyed.

Going back even further, Mr Hall can remember sitting for hours in front of a Commodore 64 which was owned by cousins. Family members could not get him away from  the television screen. No-one else was allowed near it.

"When I finally stood up, I was literally green and vomited."

While working overseas, Mr Hall told his family about his dream of opening a video game studio. When Mrs Hall told Stephanie about his  idea, she was working in a job which was  not particularly satisfying.

She said: "When Mum said Dean was starting the studio, I though I could help doing the admin, filing that sort of thing. Next, I had a whirlwind entry into video gaming and was learning quickly. I love this job. This is what I want to do."

When asked whether working together made it difficult to get along, Dean and Stephanie looked across at each other before Mr Hall said growing up together meant they had got all the rubbish out of the way.

"When tensions get high, we know there is no point getting mad. We have to be pragmatic."

And there was always Mum out in front to call time out.

The family connections did not stop at the Halls, Mr Hall said.

There were several couples working at RocketWerkz, which had both its good and bad points. Working at the video studio meant a lot of compromise and negotiations.

RocketWerkz broke all the rules of running a business, particularly about hiring family members. But it was working, he said.

"A lot of what happens here is an argument, but we keep things in context."

Mr Hall said the Dunedin environment was working well for his company. There were many good opportunities and he believed many Dunedin people did not realise how many opportunities there were.However, those opportunities also came with challenges.

RocketWerkz wanted to double in size but it had trouble finding the resources, specifically people to employ. A lot of juniors wanted to work for the company but for every two or three juniors, one senior was needed. The juniors could not be trained by other juniors and finding senior staff was the priority.

"A lot of people find us through referrals. Good staff tell their friends about us. We always do a site visit before we hire. We fly people over and take them to Nova for the doughnuts. We have a 100% success rate with the doughnuts at Nova. I think Nova know we do this now."

It was not hard work to attract people from overseas to work in Dunedin but it was up to Stephanie to do the hard work to get the administration correct to allow them to live here, Mr Hall said.Aucklanders could buy a house here and there was not the same amount of traffic.

One employee from Los Angeles had moved his family to Dunedin because of the attraction of Otago’s outdoors.

Inevitably, after a time living in Dunedin, everyone started moaning about the traffic, he said with a laugh.

Instead of focusing on one large client, as some technology companies in Dunedin did, RocketWerkz focused on smaller customers who paid $US20 to $US30 ($NZ28.37 to $NZ42.50) to buy products digitally.

The peak time for business was 11am in New Zealand. Customers overseas were getting up as RocketWerkz staff were updating products. Being in New Zealand was not a big factor time-wise, Mr Hall said.

RocketWerkz preferred to do a soft launch of new products, using Twitch, uploading to YouTube and live streaming. The Steam platform was used to sell the products.

There was a lot of experimentation for RocketWerkz staff, breaking the traditional rule of "day one" defining the success of as product.

By using experimentation, staff could work out what worked and what needed to be changed.

Computer and video games took about five years to develop and bring to market, although RocketWerkz tried to do it much faster.

"Back in the day, you would buy a game and play it. Now, the expectations from customers is the game will evolve. We are learning as we go.

"We cannot take five years to launch a product. We have to get it down to two  years. You can’t do it perfectly if you cut corners. If you do it perfectly, technology changes, customer change or a competitor moves into the market with the product.

"We want to be creative. To do that we need to be first to the market and that creates its own challenges."

The way Mr Hall developed new products was by playing a lot of games, both good and bad, to find out what worked and what did not work.

He watched movies and television, and read books, to find inspiration for a game, or for a game to evolve.

"I look at the mechanics of what works in a particular scene and how I can use it."

The market moved so fast, everyone felt like they were behind the eight ball, he said.

The Halls feel they are on the verge of creating something special as they looked for exponential growth — something like a Lord of the Rings moment.

When the company started about three years ago, Stephanie employed three people. Now, there were about 45 people employed and Mr Hall had an aim of more than doubling those numbers as soon as he could.

Skill shortage is a concern for Mr Hall. Auckland University had some video gaming papers and the University of Otago had a summer school paper. Every time he could, Mr Hall advocated for a more integrated approach to video gaming.Asked what was some memorable advice he received growing up, Mr Hall reflects back to some given by his father.

"When I was at university, I could study anything because the military was paying. I studied commerce, dropping out of computer science. Dad said to study first-year accounting if I wanted to be in business. That was valuable advice."

Mr Hall also paid tribute to a University of Otago Associate Professor Dr Ian McAndrew. Dr McAndrew presented the students with a dispute resolution paper but no lecture. The students had to find the resolution themselves through negotiation.

"That was hard core but the best thing I ever learned."

Such a very good story.