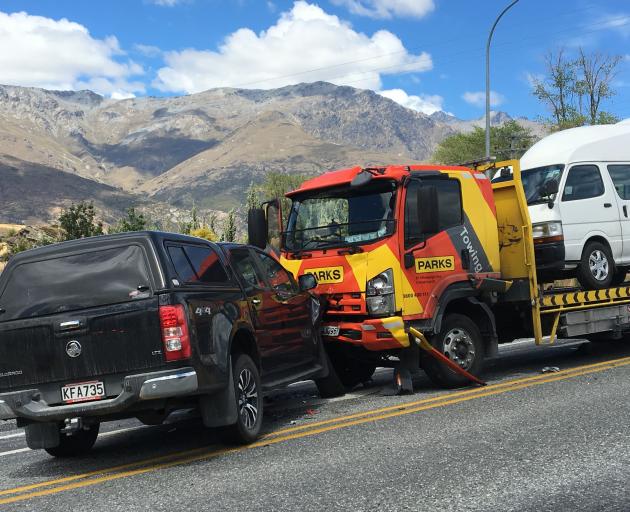 Glen Collins, who works for Parks Garage and Towing based in Christchurch, said he picked up three to four written-off cars a week from the resort and called Wakatipu roads the most dangerous.

''I drive these roads every week, every day just about, and like I say they're the worst roads I drive.

''It's just purely the international tourists that are here that do not know the road rules at all and basically shouldn't even be driving.

''They are just a major, major hazard.''

Mr Collins was travelling towards Cromwell yesterday and passing through Arrow Junction, where McDonnell Rd meets State Highway 6, when a Nissan Tiida driven by a Chinese tourist allegedly failed to give way.

The Tiida pulled out in front of Collins' 10-tonne tow truck in an attempt to turn right towards Queenstown.

Mr Collins said he hit the Tiida front-on on the driver's side, knocking the driver unconscious, while the only passenger in the car was shaken but uninjured.

The impact from the head-on bumped Mr Collins' truck sideways into a stationary Holden Colorado driven by a woman who was giving way to the tow truck, waiting to turn right towards Arrowtown.

A St John spokesperson said one person sustained ''serious injuries'' and was transported to Lakes District Hospital while the remaining three involved were uninjured.

Mr Collins said in a few weeks' time he would be driving a 40-tonne truck and if that had been the case yesterday, it would have been a fatal accident.

Jessica Machray was travelling in a vehicle behind the Nissan Tiida with her partner and sister and they watched the accident unfold.

''As we came up to the intersection it was very busy and we slowed down and we expected the car in front of us to stop, but they didn't.''

Mr Collins said something ''seriously'' needed to be done about international drivers on New Zealand roads.

Being from Central Otago, I've been thinking about a trip home to NZ, but the chaos caused by these people used to driving on the other side of the road--in my area of the country-- is giving me second thoughts.