The father of a man who was mauled by two Rottweilers in Winton on Sunday has rejected claims his son provoked the attack by entering the property where the dogs were.

Oliver Beaumont was taking his regular walk along a gravel road near his family's home in Great North Rd in the early afternoon when he was attacked by two dogs, one male and one female.

The 22-year-old suffered severe gashes to his face and puncture wounds on his arm before one of his neighbours and an off-duty police officer managed to halt the attack.

He was transported to Southland Hospital where he underwent surgery on Sunday night, but was back with his family in Winton yesterday.

Both of the dogs were impounded by the Southland District Council and a formal investigation is under way. 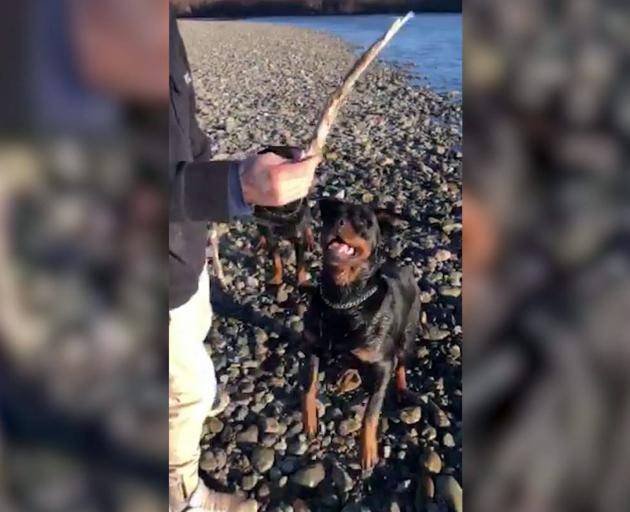 One of the two rottweilers involved in an attack on an autistic man in Winton on Sunday. PHOTO: SUPPLIED

The partner of the owner of one of the two Rottweilers, who asked to remain anonymous, told The New Zealand Herald the "lovely'' dogs were not at fault, alleging Mr Beaumont opened his gate and entered his property before the attack.

His partner owned the female dog, Zara, while the male dog, Frank, belonged to his partner's father.

"They were protecting their home like all normal dogs would.''

"They are lovely dogs and very protective of their home.

"We got the dogs to guard our house and be our forever friends.''

The suggestion that Mr Beaumont, who suffers from autism, had entered the property was rejected by his father Chris.

"Oliver has always been afraid of dogs as he was attacked three years ago by a similar breed of dog.''

"These dogs make ... noise whenever anyone walks past.

"There's no way Oliver would even go near those dogs, let alone open the gate.''

A video of the attack supplied to Stuff appeared to show the attack taking place in the gravel road Mr Beaumont was walking on, not in the yard containing the dogs.

His neighbour Annie Burazor, who was first on the scene of the attack and managed to rush Mr Beaumont to safety and administer first aid after an off-duty police officer drove away the dogs, said Mr Beaumont would not have provoked the mauling.

"He would not approach the dogs.

"He walks that walk every day multiple times up and down and those dogs are always barking on everyone and everything walking by their house.

"They are not the type of dogs that you would ever want to get up close to.''

Yeah always lovely dogs as they wipe the blood off their faces. Why dont they have a lock on the gate so no one can get in and get eaten. Several photos of him and his blood shows guy was on the road so more to this than meets the eye.

Put them down so they wont do it again

Are they registerd Seem to have neck chains but no collars