By Rebecca Fox
0 Comments
A fascination with showrooms and retro fixtures has Emily Hartley-Skudder creating some interesting dioramas in the Dunedin Public Art Gallery. The artist tells Rebecca Fox about her search for the right pieces.

While some people might be glad to have seen the back of orange swirly carpet and matching bright colourful tiles, Emily Hartley-Skudder spends hours trawling online auction sites and op shops looking for just that.

‘‘A lot of the colours and looks are unavailable to me now due to the shift in taste, decor and design.

‘‘Sourcing coloured carpet is just so hard. We are just so conservative; people don’t stock any colours.’’

The memories and nostalgia of the period are what draws the Wellington artist to it.

A still-life painter ‘‘by trade’’, she creates interesting dioramas around key pieces — sometimes her art work, at other times one of her ‘‘finds’’, such as a vintage sink. 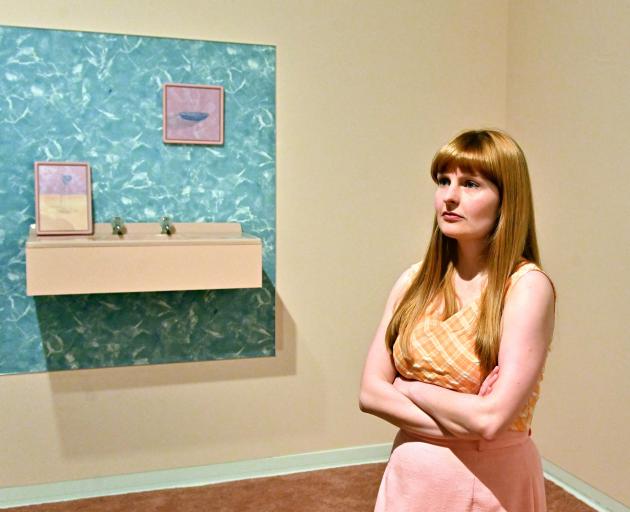 ‘‘It reflects the impact of our exhibitions and visiting artist programme.

Each of the pieces involves the artist repositioning a subject in a different way.

‘‘I thought an interesting layer to that would be altering the environment of the gallery space that the works inhabit,’’ Gutsell said.

‘‘The project reframes or subverts expectations of what a gallery space looks like.’’

For this project, Hartley-Skudder has created eight responses or environments into which the gallery’s works fit.

She has also created two of her own paintings, one of which starts off the exhibition.

‘‘If I added one of my existing works to that, it could be a good starting point. It was kind of like a cheeky ‘These are collection works, I’ll just insert one of mine’.’’

Drawing on the visual language of ‘‘showroom kitsch’’, she began to construct spaces for each of the works to inhabit.

‘‘If each of these collection works existed in my kind of fake artificial world, what would their environment look like? Or, if you were to make a showroom diorama, how would you dress this art work up? It’s a very tongue-in-cheek title [‘‘Additions and Alterations’’] references this makeover handbook, how these works are coming out of storage, but also drawing on existing works I had in various places in storage.’’

To create these environments, Hartley-Skudder also thought about what happens to works when they are sold.

‘‘If you are lucky, it goes to a public gallery collection ... but often you never know what happens to them. You don’t necessarily have control of where your work is shown or how people handle it.

‘‘I was very aware I was given this strange agency over other people’s work as well to construct an environment they never imagined their work would exist in.’’

With van Zon’s work, Hartley-Skudder has sourced some of the same yellow fabric the artist used in her work to create a towel to hang on the wall and she has found some retro wallpaper of a similar colour to Carr’s dyed flowers.

Or the garden hose she has created to accompany Parekowhai’s bronze olive tree.

‘‘It’s about changing the context and bringing it back to the domestic almost cliched, a bit kitsch.’’

It has taken Hartley-Skudder three weeks to install the exhibition as she has been finalising the layout and installations as she goes.

She arrived on site with all her materials and has been creating as she goes. She has been helped by gallery technicians, who have built some of the furniture to go with her spaces.

‘‘Things change once you are in the physical space. It’s quite challenging. I’ve have not done anything to this scale before, but it’s awesome to be here doing it.’’

The artist, who grew up in a creative household with parents in the film industry, compares much of her work to being like a doll’s house, which is where her interest in miniatures and collecting began.

‘‘You create these different artificial spaces. I was obsessed with miniatures as a kid and had a big collection.’’

At high school, she began setting up interior scenes and photographing them.

Although she has always been a painter, it was when she discovered the found object and installation side of art that she became excited.

‘‘I began to explore the tension between the real and artificial.’’