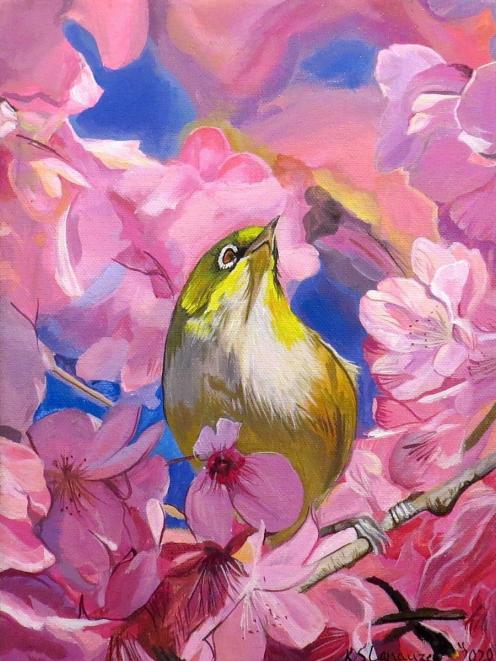 The works, in acrylic on canvas, form an elegy for the artist’s grandfather, who died during last year’s Covid-19 lockdown.

Norman Cleland was a retired teacher who instilled in his descendants a love for life and art. It was he who continually pushed for Lanauze to have her first solo exhibition, and after his death it was only natural for the artist to fulfil his wishes as a dedication to her grandfather’s life.

As such, the works on display reflect Cleland’s life and interests, from New Zealand wildlife to horticulture, reading to the wilds of the bush. Creating the exhibition has become both memorial and catharsis, a way for the artist to handle the grief of losing her relative.

Painting in a style that moves between photographic realism and a softer, more impressionistic style, Lanauze has produced a series of brightly-coloured and predominantly warm and joyful works.

Her flower and bird portraits, such as Peachy Delights: Iris Grown With Love and Waxie in the Blossom, are particularly impressive, as are two complementary works respectively showing a quiet forest stream and a maple tree in its full autumnal glory.

"Nobody Knows How You Soothe Me", Henry Turner
(Brett McDowell Gallery) 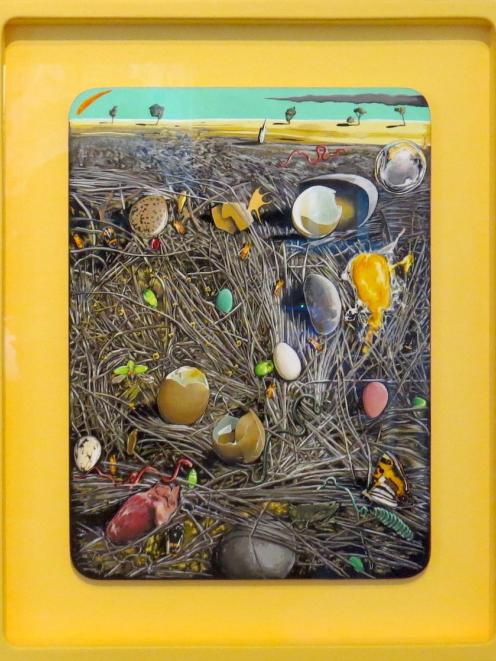 Insects and flowers form repeated motifs in the works. The gouache paintings are thought-provoking pieces painted in a highly detailed, obsessive style reminiscent at times of the flower-garden images of Dunedin’s Joe L’Estrange.

There is an added depth to Turner’s works, however, most notably in works such as Even For One Day (Waimata) and Stars Around the Beautiful Moon (Sand), in which the depicted flora and fauna stand out in sharp relief from a velvet-black background.

The artist is also skilful enough to create a powerful illusion of three-dimensionality in pieces such as Slow in the Hazy Light of Crimson (Crimson).

There are 12 full-sized works in the exhibition, along with a 13th piece, which is an array consisting of a miniature of each of the other paintings.

Each work is enclosed within a hand-created tray-like frame, the solid colours of which provide the pieces with their subtitles.

As an added quixotic touch, each work, when sold, will be accompanied by a gift which is at least laterally connected to the subject of the painting or colour of its frame. 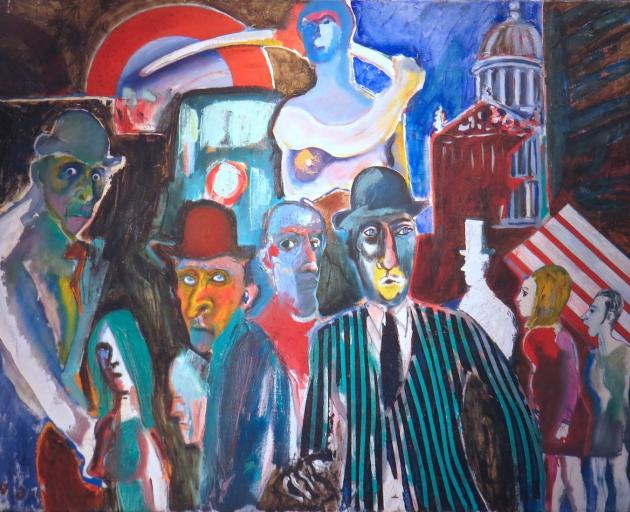 Robert Macdonald has a long and distinguished career in art, both in New Zealand and the United Kingdom. Gallery Fe29 is currently exhibiting a retrospective which covers the artist’s works between the late 1950s and early 1970s.

Born in Lancashire in 1935, Macdonald spent his formative years in New Zealand before returning to Britain in his mid-20s. Here he fulfilled his long-held desire to become an artist, supplementing his income with a career in journalism.

Many of his earlier works reflect this double life, with Macdonald’s work as a court reporter finding their counterpart in his bold, caricature-like ink courtroom sketches from the 1950s and 1960s, and in two larger oil works from 1970.

The display also includes an extended group of scenes in coloured ink from the 1950s which draw on the artist’s experiences in New Zealand and at sea.

Also on show is a series of close-cropped portraits from the early 1960s and some later darkly humorous group scenes and "grotesques", in which the influence of German expressionist artists such as Georg Grosz and Max Beckmann come close to the surface.

The exhibition provides a fascinating overview of the early years of an artist who is understandably highly regarded around the world.