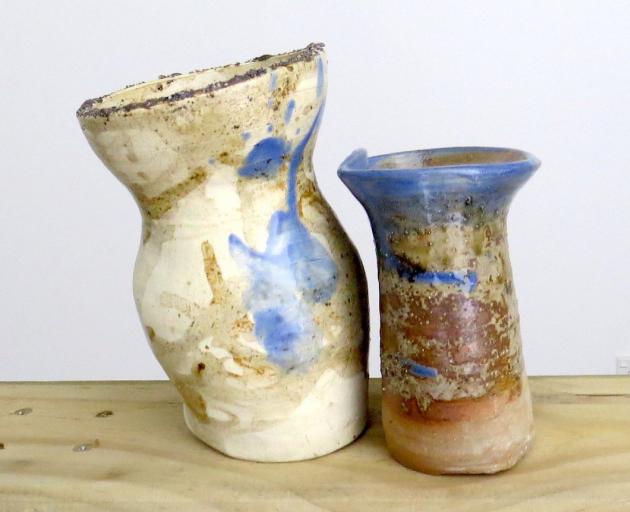 The landscape is constantly in motion. Seismic and volcanic activity raise rocks, weathering and other erosion softens and lowers their forms. The rivers carve and carry the soil to the sea. Geology is a clock of the earth set on a very long-term scale.

It is this passage of geological time that underlies the ceramic forms in Rebecca Steedman’s exhibition at Blue Oyster Gallery. In what she describes as ‘‘a series of glazed experiments’’, the artist has used local rock and other materials in conjunction with fired pottery, and then used the flow of water in river and ocean to inspire the distortions of form which she has allowed the ceramics to gain. Many of the pieces have recognisable pot-like features, but the actual and imagined interplay of water with the clay has produced mutations on this original theme.

Other works are presented as handle-like forms, some of which have further ceramic pieces suspended from them by strong fluorescent fibre. This rope, deliberately bringing to mind the working material of farm and fishery, adds a hard straight man-made edge to the organic, weathered forms of the pottery.

The exhibition is accompanied by a video showing the movement of water, the sound of it permeating the gallery space as a reminder of its slow, but determined power. 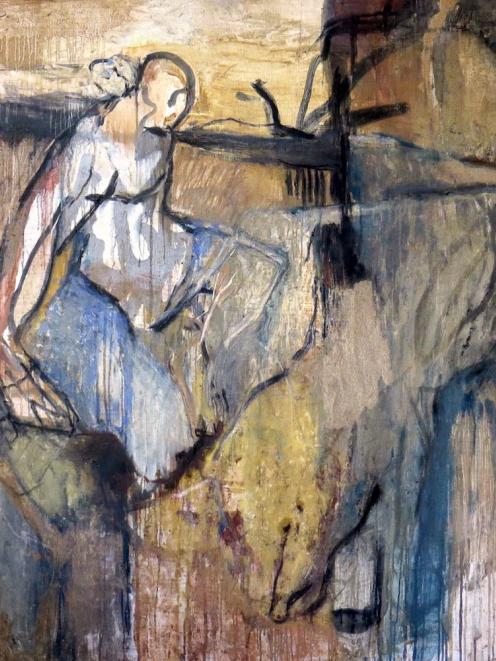 The title of the latest exhibition at Pea Sea Art has a double meaning: it is a second showing, both in the sense of it being the second exhibition at the town’s newest art space, and also in the sense of this being the second showing of a private collection of works that have not been seen since their original purchase several years ago. The works, being sold by their current owners, form a fascinating cross-section of local art work, mostly dating from the 1980s and 1990s.

There are many interesting pieces on display, among them a strong abstract by Wayne Seyb and impressive abstract photographs by Peter Hannken. Adrienne Martyn’s bold photographic character studies are also of note, as are works by the likes of Maryrose Crook, Kelly Michael and Michael Morley.

Perhaps the most surprising work in the exhibition is also the oldest: a small but lovely French landscape by Hardwicke Knight. Knight, far more well known for his photographic work and his historiographical writing and collection could quite clearly also turned his hand to attractive oil paintings.

It is, however, in the larger, bolder works that this exhibition finds its main strength, and in doing so, it provides and interesting snapshot of Otago art from the last two decades of the 20th century. 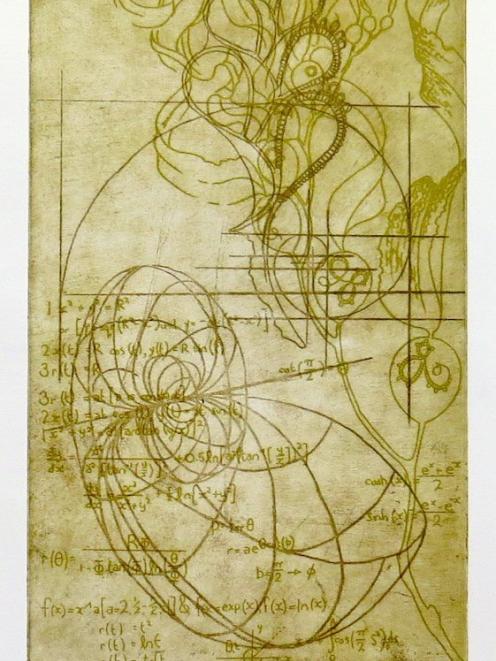 Four artists have gathered to present their saltwater memories at Moray Gallery. The artists have created complementary works loosely inspired by our coastline and coastal waters.

Melissa Martyn’s display consists of three acrylic works on paper and three large fabric pieces. The paper works each use a motif of a sentinel gull surrounded by strong rhythmic patterns of sand and seaweed. The fabric works, including the excellent Encrusted Ocean Blues, use patterns of pebble, shell, and chitin to produce meditations on the beach.

Marion Familton’s stoneware uses water and sand rhythms as a basis for an analogy between submersion and unconsciousness. This idea of ‘‘going under’’ is reinforced by her central work, a ‘‘dream head’’, marked with a tattoo of surf and seaweed.

Bronwyn Mohring is perhaps best known for her ceramic work, and here provides three such pieces based on the forms of half-eroded seashells. Accompanying these are a series of impressive, thought-provoking prints, studies of sea life and the shoreline.

Karin Tierney presents two distinct series of pieces. In one, torn paper and monoprint together create images which suggest the ocean’s vast breadth and depth. The other works forms seascape ‘‘books’’, layers of watery monoprints on cotton paper which together give the impression of the movement of the waters of the sea.