In this week's Art Seen, Robyn Maree Pickens looks at exhibitions from Michael Harrison, Dick Frizzell, and a joint exhibition with Matilda Fraser and Jay Hutchison. 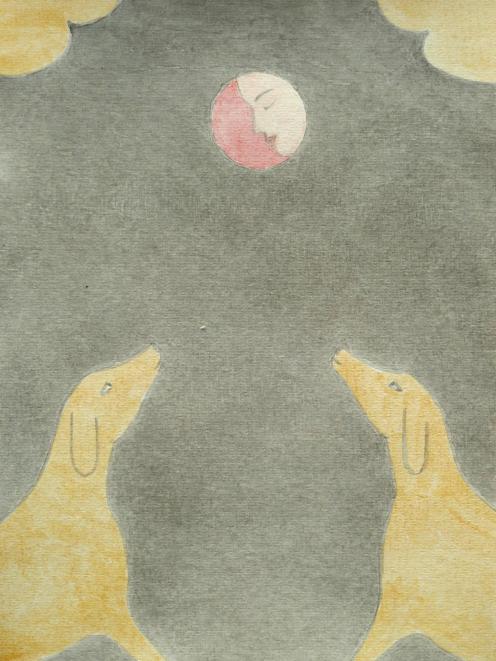 "The Accident of Ourselves" is Auckland-based artist Michael Harrison’s sixth exhibition at Brett McDowell Gallery. In the following quotation Harrison describes what drives his practice:  "I try to look again at familiar things as though I’m looking for the first time [on a good day] or the last time [on a bad day] — or for the only time" (Artspace, Auckland, 2002). It is this clarity that Harrison brings to his depictions of people, cats, dogs and the elements. Oddly, it is this clarity that enables Harrison to capture the familiar and the strange, as in the painting Her Reflected Light (2018). With a pale yellow dog arching upwards in each bottom corner and a plump cumulus cloud of the same pale yellow in the top two corners of the painting this delicate acrylic is vertically symmetrical. The apparent subject of the two dogs and the two clouds seems to be a female face enclosed in a red circular moon suspended between the two sets of yellow. The night sky is a gentle grey.

In Follow the Sea (2018), a dolphin leaps out of the sea to look at a slim young man against a background of crushed poppies. Harrison’s acrylics resemble the lightness of watercolour. Whether as intentional counterpoint, Brett McDowell also presents a collection of elegant, geometrically inflected ceramic works by Isobel Thom. 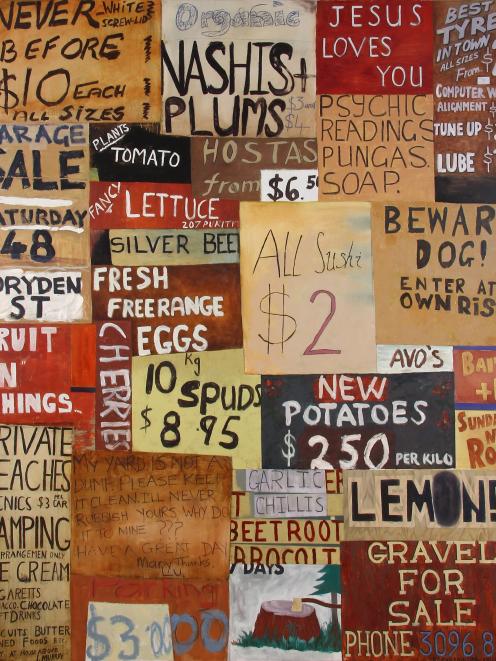 The title of Dick Frizzell’s current exhibition, "Bark", at Milford Galleries appears in Red Painting (2018) as one of the many road signs Frizzell has congregated together in this large and, yes, predominantly red painting. Condensed together in this particular work, signs advertising property maintenance, organic produce, firewood and ukuleles are tightly jammed up against one another, jostling for space and occasionally overlapping. Other paintings in the category of hand-painted roadside signs focus on motel signs, on roadside stalls for fruit and vegetables, and even horse manure. Frizzell is deft in his handling of the vernacular.

The other category of text-based works featured in "Bark", and I hope he will forgive the segue, is the work of poet Sam Hunt. The lines and stanzas Frizzell extracts from Hunt’s poetry, while still legible as text, become visual actors in a new play. In Doubtless (17) — A Sam Hunt Poem (2011), for example, two excerpts from a Hunt poem are arranged in a dynamic counterpoint along a diagonal axis. Against a sky-blue background one excerpt nestles in a white cloud-like form in the top left, while on the other side of a thin black diagonal line the second excerpt bunkers in a black box. It is Frizzell’s reworking of these two excerpts in the formal language of opposition (white/black, curvilinear/rectilinear, top/bottom) that amplifies the tension between the two fragments.

Taking into account the curatorial premise of parallel exhibitions that investigate the artists’ immediate surroundings — in this case two separate exhibitions by Matilda Fraser and Jay Hutchinson — a further shared thematic can be discerned: nourishment. Fraser’s documentary-style video work centres on the work of Frederic Truby King (1858-1938), who established what become known as the Plunket Society. Fraser intersperses locational footage from around Karitane where Truby King lived, and maps of the area with a performative sequence in which the artist adds Karicare milk formula to an empty plant pot that is then filled with a sapling to which further Karicare and water are added. These three main elements of the video work are subtitled with a text by Truby King on many of his key ideas and observations on resilient plant species, the importance of breast-feeding, and his dubious attitudes regarding women and education (less is more).

Huchinson also takes the Otago region as his geographical focus, but his series of needle-worked art objects are drawn from detritus found on the urban streets of Dunedin. Although two of the simulated objects — two squashed cups: Wendy’s and McDonald’s — are symptomatic of globalised capitalism, the third object — a Jimmy’s pie bag — is the local exception. And, of course, the thematic of "nourishment" suggested earlier is debatable. The Jimmy’s pie bag is installed under a life-like mesh fence while the two other works are encased in vitrines.