From this simple source, the master potter has created an extensive range of exquisite forms. His series of bowls, bottles, and other vessels seem almost functionally utilitarian yet are an aesthetic delight.

From the original insulator forms, Parker has extracted the grooved texture, originally intended to hold cable, and turned it into an architectural feature.

The supple, disparate forms of the individual pieces are linked by uniting motif and, as such, are impressive when placed together in groups; the various forms seeming to interact with each other and with the surrounding space.

Indeed, when displayed in this fashion, the different pieces take on separate personas as if they are the characters in a play.

In the current exhibition, Parker has limited his display to works in a series of monochrome shades, allowing the forms and surfaces to speak uninterrupted by the distraction of colour. This also allows the subtle, ombre-like differentiations in the surface glaze of the glossier grey pieces to come to the fore.

The title of Karen Baddock's latest exhibition, ''Focused'', is ambiguous. The artist's work definitely shows an intense, almost obsessive, focus on her part to create these precise animal studies (perhaps portraits would be a better term).

There is also, however, the uncanny feeling that the animals depicted have their attention firmly on the viewer, and the focus, therefore, lies in the opposite direction.

Baddock has presented several works in graphite on paper and several others in oil on board or panel, and all of the works show equally the same attention to detail and skill in presenting the animals not as plain two-dimensional objects, but as living, vibrant creatures, each with its own personality. Given that many of her works feature that most unforgiving of natural subjects - birds - this shows great ability in the artist. There is also a warmth about the images which makes them more than simple scientific studies.

The images have predominantly been presented with plain white backgrounds, divorcing the wildlife from its natural surroundings. This gives us yet another type of focusing, with the viewer being undistracted by the background and giving full attention to the beautifully depicted creatures in the works. 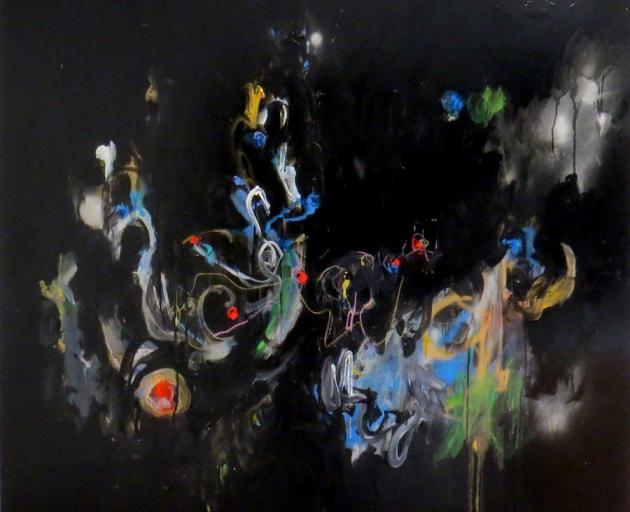 Brendan Jon Philip's latest exhibition features a series of dark abstract and near-abstract works in which the artist attempts to bring forth an impression of the moment of creation.

The cosmogenic event is suggested in a series of violent outbursts of colour, arrayed gesturally over a black that is bright and hard. We feel the colour's force yet are aware of the looming void.

This inky negative space has a weight and presence which threatens to overwhelm and envelop the light, yet the latter's strength fights back in the age-old battle of irresistible force versus immovable object. Shapes appear dimly at the border between essence and void, though they are intangible, only hinting at their meaning and identity.

Philip has chosen the phoenix as the pivot of his exhibition, and it is shown in the largest and only truly representational piece on display.

Philip suggests that the phoenix is an apt symbol for the artist's practice, with its cycles of creation and re-creation. It may also have a deeper cosmological significance within this exhibition - are we seeing the birth of the universe for the first time, or is there a cycle in which one universe is created from the ultimate collapse of a previous one?