Alex Monteith reflects on her time filming in Fiordland for the video work in ‘‘Coastal Flows / Coastal Incursions’’ exhibition. Photo: Linda Robertson
A chance conversation has led to boxes of material excavated from middens in coastal sites in Fiordland in the 1970s being opened for the first time in years as part of a unique art work created by Auckland artist Alex Monteith. She talks to Rebecca Fox.

Their unassuming looks belie their importance as inside are believed to be the remains of Maori and Pakeha settlement in Fiordland - pieces of woven flax, shells, bone, remnants of clothing, and burnt wood - found in middens where they lived and visited centuries ago.

These boxes contain the findings of archaeologist Peter Coutts from his excavations in the late 1960s and early '70s in Patea/Doubtful Sound, Te Puaitaha/Breaksea Sound, Tamatea/Dusky Sound, the lower fiords and Te Mimi o Tu Te Rakiwhanoa, the outer coastal region of Fiordland.

Artist Alex Monteith discovered this collection by accident while doing research for another project. She was talking about the ecology of the area with a former New Zealand forestry worker, Richard Anderson, who wondered what had happened to Coutts' collection of boxes. 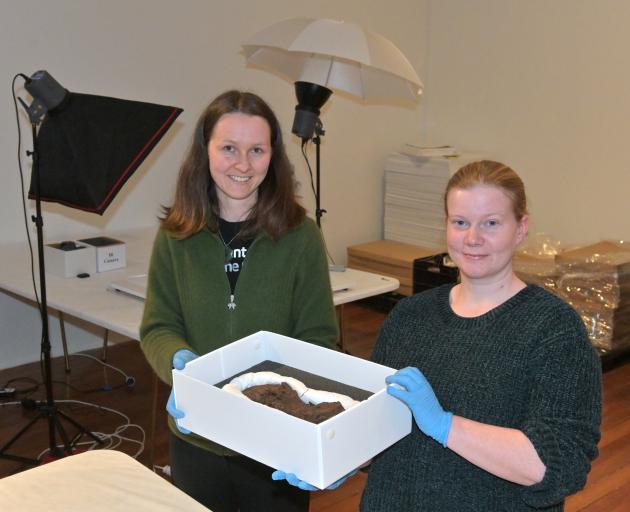 Southland Museum collections manager Kimberly Stephenson (left) and collections technician Laura Davies unpack an 18th or 19th-century sealer’s boot, which will be on display during the ‘‘Coastal Flows / Coastal Incursions’’ exhibition. Photo: Linda Robertson
''As a 20-year-old, that stuck in his mind as there were a huge number of boxes going out.''

It piqued Monteith's interest and she investigated, discovering Coutts was doing New Zealand's first PhD in archaeology when he excavated the areas and removed a lot of the material.

At some point in the 1980s when he moved to Australia, Coutts gave the material to Southland and Otago museums.

More than 300 boxes were given to Southland Museum and Art Gallery Niho o Te Taniwha and it is estimated about 80 boxes or more were given to Otago Museum.

The size of the collection meant many of the boxes have been untouched since, although some of the material given to Southland had to be re-boxed when the originals deteriorated.

''There hasn't been any way for Ngai Tahu researchers to access the raw material with any kind of precision since [the artefacts] were dropped off.'' 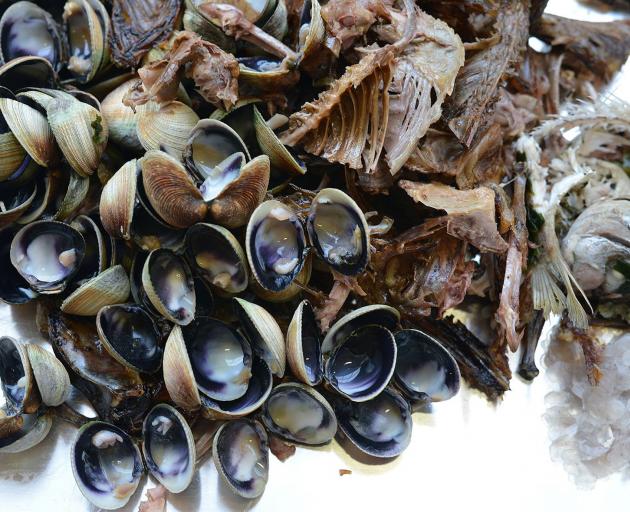 Simon Kaan and Ron Bull, the Kaihaiukai Art Project. Photo: Supplied
So Monteith began to explore the idea of a collaboration between the two museums and her own work to look at the effects of archaeological, academic and museological processes on the stories associated with the materials.

''The initial trajectory came about by chance but once the situation emerged it seemed like a really nice opportunity to look at some research partnerships and museum partnerships, especially around very big collections which archaeological collections inherently are. Exploring what partnership might mean.''

''This show, because of where the gallery is, provided the chance to explore some collaborations and relationship between the museums and to do some shared works on the collection.''

Emeritus Prof Atholl Anderson (Kai Tahu) has written about the collection and with others has curated a selection of the material to go on displace at the gallery.

''It's displayed on work tables, as it is all current research.''

It has led to an exhibition at DPAG where her collaborators Vicki Lenihan (Waitaha, Kati Mamoe, Kai Tahu), Koreana Wesley-Evans (Kai Tahu, Kati Mamoe, Waitaha) and Baylee Smith (Ngati Maniapoto) are ''performing'' a real-time process of assessing and making an inventory of material from the collections of the two museums three days a week.

A room has been set up in the gallery with the equipment needed to inventory, record and re-box the works.

Visitors to the exhibition can watch them work through a window and talk to them about the processes involved.

Their research will then add to a database that is building towards a record of the collection material, which will help further research into the materials.

Lenihan has been involved in the project since the beginning, working on the first effort to inventory some of the material.

Providing an insight to the area where the material comes from and a closer look at some of the material are four large screens showing video shot by Monteith.

The video also shows excerpts from the various interviews Monteith did involving the former forestry workers and iwi and bits of her research notes.

''It concentrates a lot on the waterways and the transits between the places where Coutts made excavations, which are fundamentally seasonal shelters which pre-date contact, through contact and past Cook.

''The rock shelters preserved uniquely some quite fragile material, like fibre-based stuff, Maori weaving, woven elements, settler and sealer pockets of coats and a boot has survived.''

An iwi liaison committee has indicated how the work should start and the Dunedin material was chosen to be looked at first.

''This project also looks at the effect the academic and colonial gaze, the nature of what limits might have been at play.''

Research has shown talk of calorie counts from fish bones done back then do not take into account key forms of carbohydrate, like fern root, they may have also eaten.

''What it means to not find those at the site because of the sieving method. It allows you to look at PhD work that was done and add to and fill in the picture around it.

''It looks deeply at the old collection and the limits of the write-ups and some of the bias of the given era.''

Also part of the exhibition was a collaboration with Simon Kaan and Ron Bull, the Kaihaiukai Art Project, where they provided a selection of traditional kai to guests at the gallery who were encouraged to eat with their hands, and then the remains were piled at the end like a ''midden pile''.