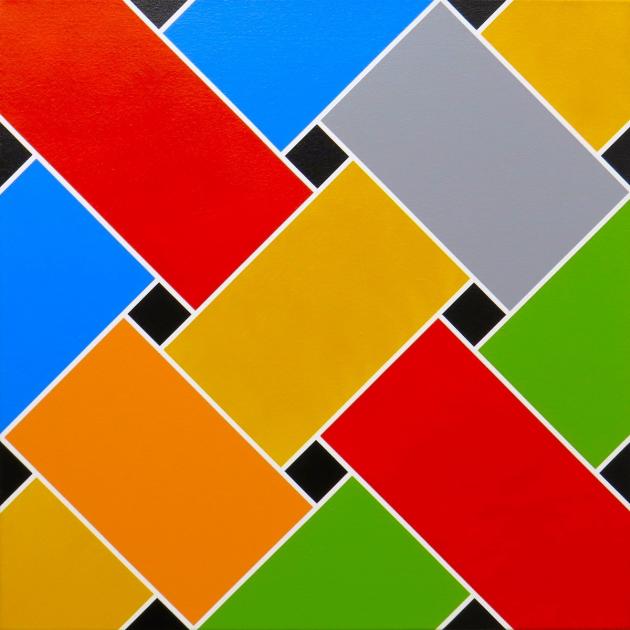 Centre stage at Milford Gallery, topologically speaking, currently belongs to Terry Stringer, with a series of the artist’s impressive cast bronze sculptures. Figuratively speaking, however, much of the limelight must fall on the works of Ian Scott, which surround them.

Scott’s display is a major retrospective of the artist’s geometric abstractions, and is the first local show of his work since his death last year. The exhibition focuses on Scott’s colourful lattices, a series which he began in the 1970s. With echoes of early to mid 20th century artists ranging from Mondrian to Stella, the wonder of Scott’s works lies in the effect they have on our perception. The apparent woven surfaces and the strongly directional lines of paint give the pieces a three-dimensional effect and bring to mind traditional art ranging from Celtic knotwork to tukutuku.

Around these works are a series of Stringer’s bold sculptural forms. As with Scott, Stringer’s aim is to confuse our senses, producing chimeric works with as many facets as there are directions to view them from. Faces become architecture, architecture becomes bodies, and bodies return to being faces. Whether it be colossal works such as the superb The Head is a Temple or the artist’s move into trophy-sized and wall-mounted bronzes, the effect is remarkable.

The annual Jason Greig show at Brett McDowell Gallery has become something of an institution. This year’s exhibition does not disappoint, with a fine series of memorable scenes of the uncanny and sinister.

The exhibition’s title ‘‘Mythillogical — the pathology of context perverted’’, if anything, mystifies further the dark figures which form the protagonists of Greig’s art. There certainly is a sort of subverted mythology about the works, drawing on the same murky sources as 19th-century writers such as Poe and Lovecraft, and the more unnerving works from the era’s symbolist artists. Greig’s work would easily sit alongside art by Redon or Bocklin, Ensor or Knopff.

Greig uses two main media — oil on board and monoprints with painted ink. The monoprints frequently feature sombre, haunted figures presented against strongly coloured plain backdrops. The effect of the bright backgrounds is to accentuate the deliberate morbid sensibility of the portraits. The oil works in this exhibition are predominantly monochromatic, with delicately painted black characters presented in action against waxy yellow backdrops.

Intriguingly, it is the two works which reverse these ideas that are the standout pieces — Aurora, an oil in warm (by Greig’ standards almost pastel) tones, and Berlusconi’s Bad Trip, a monoprint using the oil colours of forceful black over wan yellow. 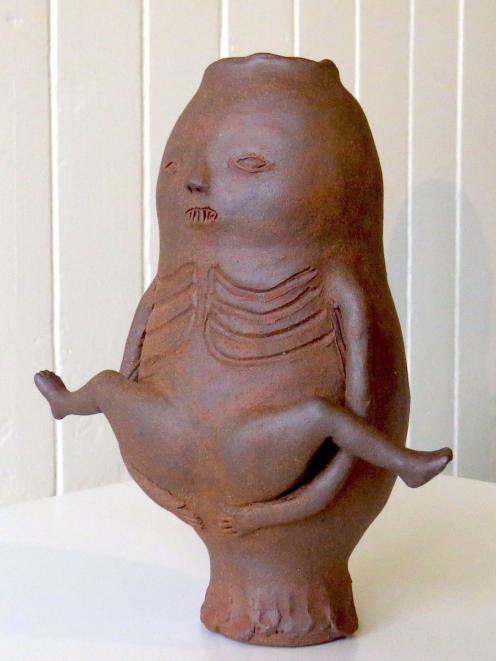 New Zealand ceramicist Kate Fitzharris has spent much of the last year as artist-in-residence at Shigaraki Ceramic Cultural Park in Japan. During that time, she has immersed herself in study of the traditional ceramic styles for which Japan is justifiably famous, and also in exploring the wealth of different clays available to produce different textures and colours in finished pottery.

Fitzharris’ current exhibition at RDS examines these styles and materials in work which is simultaneously utilitarian and whimsical. These are utensils, but their worthiness has been increased by shaping them as living, named creatures. Many of the pieces seem have been given their own personalities through the use of human-like faces and bodies, most of them in forms which, though only hinted at, clearly have Japanese influence.

Several of the pieces look like they could have stepped out of a Miyazaki film. Yet there is also a subtle Western thread running through the works, with the Celtic ‘‘rude woman’’ figure, the Sheela-na-gig, represented in some of the pieces.

In many cases, it is the process and material which is being drawn attention to as much as the character of the pieces. Our eyes are drawn repeatedly to the surface textures and clay colours which are integral elements in the finished products.